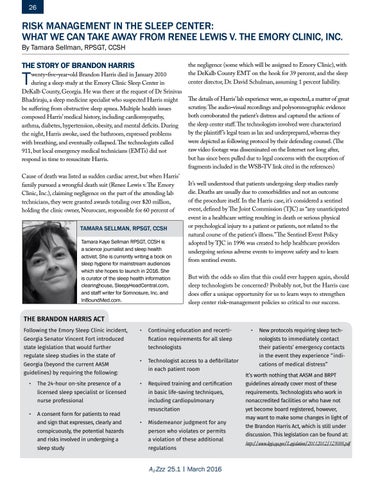 RISK MANAGEMENT IN THE SLEEP CENTER: WHAT WE CAN TAKE AWAY FROM RENEE LEWIS V. THE EMORY CLINIC, INC. By Tamara Sellman, RPSGT, CCSH

THE STORY OF BRANDON HARRIS

wenty-five-year-old Brandon Harris died in January 2010 during a sleep study at the Emory Clinic Sleep Center in DeKalb County, Georgia. He was there at the request of Dr Srinivas Bhadriraju, a sleep medicine specialist who suspected Harris might be suffering from obstructive sleep apnea. Multiple health issues composed Harris’ medical history, including cardiomyopathy, asthma, diabetes, hypertension, obesity, and mental deficits. During the night, Harris awoke, used the bathroom, expressed problems with breathing, and eventually collapsed. The technologists called 911, but local emergency medical technicians (EMTs) did not respond in time to resuscitate Harris. Cause of death was listed as sudden cardiac arrest, but when Harris’ family pursued a wrongful death suit (Renee Lewis v. The Emory Clinic, Inc.), claiming negligence on the part of the attending lab technicians, they were granted awards totaling over $20 million, holding the clinic owner, Neurocare, responsible for 60 percent of TAMARA SELLMAN, RPSGT, CCSH Tamara Kaye Sellman RPSGT, CCSH is a science journalist and sleep health activist. She is currently writing a book on sleep hygiene for mainstream audiences which she hopes to launch in 2016. She is curator of the sleep health information clearinghouse, SleepyHeadCentral.com, and staff writer for Somnosure, Inc. and InBoundMed.com.

the negligence (some which will be assigned to Emory Clinic), with the DeKalb County EMT on the hook for 39 percent, and the sleep center director, Dr. David Schulman, assuming 1 percent liability. The details of Harris’ lab experience were, as expected, a matter of great scrutiny. The audio-visual recordings and polysomnographic evidence both corroborated the patient’s distress and captured the actions of the sleep center staff. The technologists involved were characterized by the plaintiff ’s legal team as lax and underprepared, whereas they were depicted as following protocol by their defending counsel. (The raw video footage was disseminated on the Internet not long after, but has since been pulled due to legal concerns with the exception of fragments included in the WSB-TV link cited in the references) It’s well understood that patients undergoing sleep studies rarely die. Deaths are usually due to comorbidities and not an outcome of the procedure itself. In the Harris case, it’s considered a sentinel event, defined by The Joint Commission (TJC) as “any unanticipated event in a healthcare setting resulting in death or serious physical or psychological injury to a patient or patients, not related to the natural course of the patient’s illness.” The Sentinel Event Policy adopted by TJC in 1996 was created to help healthcare providers undergoing serious adverse events to improve safety and to learn from sentinel events. But with the odds so slim that this could ever happen again, should sleep technologists be concerned? Probably not, but the Harris case does offer a unique opportunity for us to learn ways to strengthen sleep center risk-management policies so critical to our success.

fication requirements for all sleep

state legislation that would further

regulate sleep studies in the state of Georgia (beyond the current AASM guidelines) by requiring the following: • The 24-hour on-site presence of a

requirements. Technologists who work in

nonaccredited facilities or who have not

yet become board registered, however,

• A consent form for patients to read and sign that expresses, clearly and

• Misdemeanor judgment for any

person who violates or permits

and risks involved in undergoing a

a violation of these additional

may want to make some changes in light of the Brandon Harris Act, which is still under discussion. This legislation can be found at: http://www.legis.ga.gov/Legislation/20112012/123098.pdf 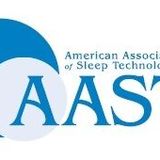