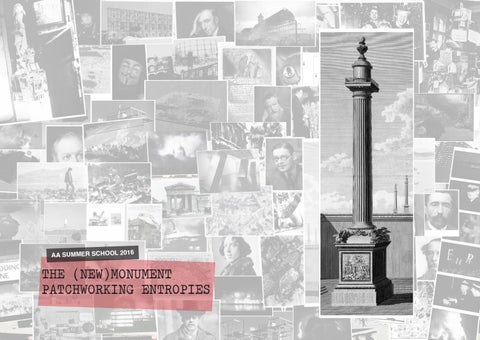 “On rising to my feet, and peering across the green glow of the Desert, I perceived that the monument against which I had slept was but one of thousands. Before me stretched long parallel avenues, clear to the far horizon of similar broad, low pillars.” John Taine(Eric Temple Bell), The Time Stream

As opposed to a reading of history as a continuum moving towards progress, Patchworking Entropies sees it moving towards its collapse. Contemporary metropolis is praised as cacophonous conglomeration of different voices. Many times analysed as a physical overlap of different layers in which the continuum of time is printed over the years, the city seems to develop only towards improvement through time. Our understanding of the city, and particularly of London, goes beyond the physical one. In parallel to the physical presence of the built London there is a fictional one. The latter product of the readings and translations of the former. Film, literature and music configure an unreal city that architects can take advantage from for our role of producers of new readings of the city. Was Dickens’ Bleak House(1853) more influential in the configuration of London than Sidney Smirke’s Carlton Club(1854)? Kubrick’s London in A Clockwork Orange or Thamesmead South estate where it was shot? For us, the continuum in the city is present in the layers of fiction that its literature, film and music generate. London’s time continuum is now and Pudding Lane. There, erected as memorial of the Great Fire that devastated the City in 1666, stands The Monument. The trauma generated by the episode placed the monument in a state of exception as memorial; commemoration here seeks for oblivion more than for keeping in mind. However, as capitalized version of all the others, the Monument puts into question the categories of history associated to such reminders. As blank Trajan’s column, it doesn’t engrave the event but portrays the tabula rasa it produced; it doesn’t celebrate history but its suspension. How does The Monument operate in a city that wants to replace Rome as The Eternal City? The Monument became a turning point in the logic of classic monuments. Although delivered some three hundred years before the due date, it can be considered a premature natality of what Robert Smithson called the ‘new monuments’, which “instead of causing us to remember the past(...), [they] seem to cause us to forget the future.”(Entropy and the New Monuments) It is with that condition of standstill in the time continuum that The Monument synthesises many of the fictional readings of London, a city trapped between its representation as New Babylon(the city of collapse) and New Jerusalem(the city of perfection). The ashes with which the cinerary urn crowns the column operate as symbol of both the Phoenix’s redemption and the eternal Fire.

“...the city must never be confused with the words that describe it. And yet between the one and the other there is a connection.” Italo Calvino, Invisible Cities

It is in the edge of that duality that different authors have read the city. William Blake walked its streets seeing the condemned metropolis with its “marks of weakness, marks of woe.” However, along the lines of his London(1793), the gaze of the poet brings Cain’s mark —the symbol God put into Adam’s son as curse for the murder of his brother(“A restless wanderer you will be on earth(...)so that no one coming across him would kill him.” Gn 4:12-15)—, a sign of woe and the promise of protection. Later, T.S. Eliot would be the one continuing the peripatetic approach, crossing a London Bridge that continuously seemed to be falling, reading London as The Waste Land(1922), the modern city that yields no fruit. Opposed to the vertical erection of The Monument and its succeeding monuments(gherkins, shards or cheese-graters), Eliot’s journey is downwards in a re-enactment of Dante’s Inferno, hoping that at its bottom he will find the shantih(“the Peace which passeth understanding”) with which he closes the poem. It was the closing lights of the day over “the biggest, and the greatest, town on earth” that triggered Marlow’s memories of the Heart of Darkness(1899), opening the book describing London with his “and this also(...)has been one of the dark places of the earth.” John Hejduk erected the Collapse of Time (1986) in Bedford Square as a counter-Monument that joined the time of memory and the time of coffin-making. It is that readings of London as a monument “not built for the ages, but rather against the ages”(Smithson), the London of “no future”(Sex Pistols), which is our concern: a search for an entropic London. Our interest is in arguing the existence of another London, one that is not on its streets but in the (mal-)fictions they have generated(in literature, cinema, music and architecture). Not a physical London but an unreal one. Our aim in Patchworking Entropies is to approach London through these lenses. We will explore the entropic fictions by watching films, reading books and listen to music that have represented the city. Then, we will translate them into spatial reproductions and experiment with the architectural strategy of patchworking to generate a collective model of the unit. That model will constitute and challenge the understanding of London as a continuum in space and time.

Patchworking Entropies studio takes place in the year 2366. Using 2016 —350 anniversary of the Great Fire— as mirror of 1666 in which to project London in its future state, we will design a city in an imminent state of ignition—a (new) Great Fire, possibly the final one, is about to arrive. The studio will be developed in two phases:

The first one will address the representation of London in 2366. For it, we will engage with the readings(books, films, music and architecture) of London as entropic city. The output of this phase will develop The (New) Monument—a collective model of the City elaborated by the studio in conjunction. The proposal will consist of the patchwork of the entropic visions of the city. The main aim of the workshop is for the students to understand ‘patchworking’ as architectural strategy. Similar to collage and layering in the superposition of mismatched elements, patchworking as a technique will move beyond. On the one hand, it will emphasise the (re)production of fragments—from the literary, cinematic, etc sources— more than the as-found connotation of collage. On the other, in the patchwork the stitches become as relevant as the patches as spaces in which to operate for generating the quilt as a whole. The patchwork in our brief will become both the (re)production of the narratives into spaces and the stitching of overlapping points in them. Exploring texts such as The Waste Land and The Portrait of Dorian Gray, films as V for Vendetta or Children of Man, we will reproduce their spatial construction. Therefore, the unit will develop an architecture of translation—representation instead of design—of the fictional depictions. Mudlurking in the river Thames will be our material source. As opposed to the new beginning set by fire, the stream flow of Father Thames produces a different continuum in the history of the city. For years used as dumping yard of London, the low tide is an opportunity for debris-hunting. For us, the idea of ‘debris’ challenges the continuum of time: drowned, its past is forgotten; dis-functional, its present is on hold. We will appropriate and modify them to represent the future. Out of the debris of London we will re-produce its entropic visions. In our mind there are reference to Schwitters’ Merzbau column or Baader’s Great Plasto-Dio-Dada-Drama, totemic constructions and burning catafalques... However, our version would be in ‘destructivist’ style as the second phase will consist in the production of a (fake)documentary of the day of the (New) Great Fire. This phase will focus on the staging of the coming its end. Its stage will consists of an architectural project of destruction. Through mixed-media we will question the relations between the actual event, its reproduction as fictional documentary and its broadcasting in virtual version. All of it in a com-memorative celebration of a no-future to be broadcasted on the 2nd of September, anniversary of the ignition of the Great Fire.

Javier Anton was trained as an architect at the Universiy of Navarra, where he received his PhD on History and Theory of Architecture (2016). He graduated from the “M.S. in Critical, Curatorial and Conceptual Practices in Architecture” (CCCP) at GSAPP, Columbia University (2014), where he was previously Visiting Scholar in 2008. During his Masters at Columbia he was appointed the research and teaching assistant of Mark Wigley, Dean of the School. He organized and directed the “CCCP Venice Observatory research lab” during the 2014 Venice Biennale. He has received several fellowships and grants, awarded on design competitions and has presented his research on several International Conferences. He has also taught for five years at the School of Architecture of the University of Navarra, where he was recently appointed as program coordinator of the new Degree in Design that will start this coming fall.

The Monument The Museum of London

Patchwork of the (New) Monument

Alvaro Velasco is currently completing his PhD at the Architectural Association, London, where previously he studied a MA in History and Critical Thinking in Architecture. He is an architect trained in the Univesity of Navarra, Spain and he has worked for practices in Spain, New York and London. Alvaro has taught and collaborated with the design departments of the AA and the University of Navarra.

Day of the (New) Great Fire

Day of the (New) Great Fire

Patchwork of the (New) Monument