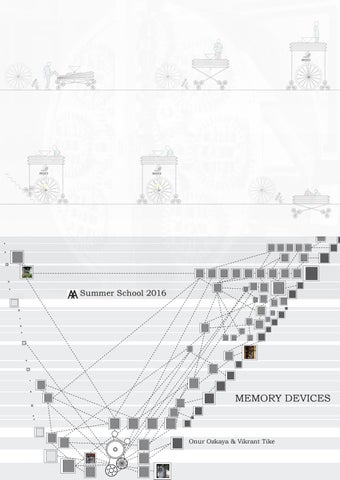 MEMORY DEVICES We at one glance can perceive three glasses on a table, Funes, all the leaves and tendrils that make up the grapevine. He knew by heart the forms of the clouds at dawn on the 30th April 1882, and could compare them in his memory with the mottled streaks of a Spanish book he had seen only once and with the outlines of the foam raised by an oar on the Rio Negro the night before the Quebracho upsring. These memories were not simple ones; each visual image was linked to a muscular sensation, thermal sensations and so on. Jorge Luis Borges _Fictions

TO REMEMBER AND TO FORGET In Fumes the Memorious, Luis Borges narrates the fictional story of a man who remembers too much, a man who could spend an entire day on re-constructing his past memories, or a dream from last night or all other numbers, languages or objects he has come across until his entire world is one of intolerably uncountable details, an infinite mental catalogue of all the images of his memory. Despite his irrefutable memory Borges summaries at the end that it was difficult for Fumes to think since â&amp;#x20AC;&amp;#x153; to think is to forget a difference, to generalize, to abstract. In the overly replete world of Funes, there was nothing but details.â&amp;#x20AC;? The reconstruction of our memories defines time for an individual. But it isnâ&amp;#x20AC;&amp;#x2122;t only what we remember, it is also what we choose to forget that constructs the mental structures of the places we have been, the people we have met , what we have felt or seen or heard , creating the ever changing stream of the memories we live with. Similarly with the passing of time, as memories of events fade, buildings and spaces and even cities often maintain meaning that no longer represent their current use or value, limiting our imaginations to their possibilities of change. Through fabricating a memory can we empower communities to counter present dominant narratives? And perhaps to reimagine a future that better understands what we would like to take forward and what traces we would like to remember of the past.

THE BRIEF Taking London as the catalyst for reconstructing either personal or collective memories , the unit will create 1:1 scale devices that will challenge the essence of time and its transcendental nature within our minds as well as the surrounding built environment. Exploring the ephemeral relationship between memory and place as philosopher Edward Casy puts it “at once intimate and profound”, we will unite narratives, places and objects to create superfluous devices that have multiple meanings idiosyncratically linking the collective and the individual. Unlike a public clock , as the horologist Douglass H Shaffer says “is a fixed, monumental, functioning as an iconic time device”, our structures will oscillate between the personal and the public creating a nomadic and fluid space-time continuum, constantly shifting like our cities and our memories of them.

WEEK 3 // DEVICES Week Three will comprise of constructing a 1:1 physical installation of the ‘memory device’ that will be located within the chosen site/s and then using it as a catalyst to generate new or shift historical memories of the city. The devices will be modular and portable with easy assembly and fabrication methods. The play of these devices with its context will be documented to form a new body of re-constructed narratives and space- time memories that will presented at the final AA Jury. Learning Outcomes 1. Urban Studies: Mapping and translating the functioning of the City. 2. Documentation: Materializing research and conceptual development in different formats. 3. Digital: Learning about contemporary digital design tools. 4. Team Work: The collective imagination of the unit will determine its work. 5. DIY Attitude: How to use limitations of space, scale, and time as a creative opportunity. 6. Prototyping: How to adapt both sophisticated and primitive design techniques.

The second exercise will be expanding on these experiential narratives into objective artefacts. Using a combination of the AA wood workshop as well as the digital prototyping lab, we will test several small scaled sketch models of our devices.

By mapping the traces of the trails through a combination of photo, video, sound and found objects students will fabricate individual narratives that form a ‘synthesised memory’ associated with their recent experiences of London.

Week 1 begin by taking memory trails along the East London and Regents Canal observing the fragments, trajectories and moments that form the spatial and mental layers of this urban environment.

TEAM ONUR OZKAYA is a practicing industrial designer and a lecturer at Cambridge School of Art and Chelsea College of Art in London. He started experimenting with furniture and industrial design as an architecture student at Architectural Association, London. His research and practice have been focusing on geometry, composite materials and complex manufacturing techniques to explore contemporary design solutions in the field of architecture and design. He completed his graduate degree at the Architectural Association and worked for Foster and Partners between 2007-2009. His recent furniture projects received several design awards in Tokyo (Tokyo Designers week 2014) and Italy (Aâ&amp;#x20AC;&amp;#x2122;design Awards 2013-14). Based in London, he has been working across a wide range of disciplines, developing many consumer products from furniture to various design commissions. VIKRANT TIKE completed his architectural education at the London Metropolitan and the AA School of Architecture after having studied fashion and sound engineering . Working for international architectural practices like Foster and Partners, Vikrant gained design experience on international large scale high rise towers and masterplan projects in Australia, Malaysia and Morocco. He was Unit1 Master for at the Chelsea School of Arts in 201314 and has taught at the AA Summer School, Vertical Design Studio at the Welsh School of Architecture as well as at the BSSA school in Mumbai. He also tutored at the Vernal fabrication workshop held at Biligi University in Istanbul in 2013. With a keen interest in combining high quality hand craftsmanship with contemporary digital design and fabrication techniques, Vikrant co-founded SAV in 2011 and currently drives the digital modeling and fabrication research within his studio.( http://www.studioamitavikrant.com )

TALKS AND WORKSHOPS A series of weekly cross disciplinary talks and workshops will be held throughout the program.