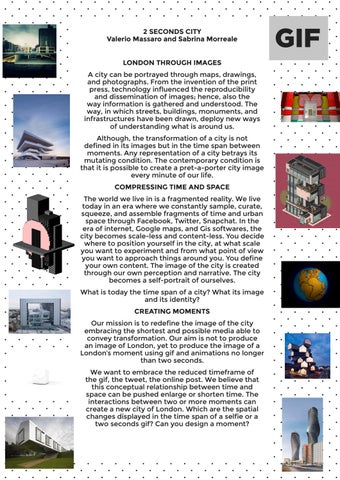 2 SECONDS CITY Valerio Massaro and Sabrina Morreale LONDON THROUGH IMAGES A city can be portrayed through maps, drawings, and photographs. From the invention of the print press, technology influenced the reproducibility and dissemination of images; hence, also the way information is gathered and understood. The way, in which streets, buildings, monuments, and infrastructures have been drawn, deploy new ways of understanding what is around us. Although, the transformation of a city is not defined in its images but in the time span between moments. Any representation of a city betrays its mutating condition. The contemporary condition is that it is possible to create a pret-a-porter city image every minute of our life. COMPRESSING TIME AND SPACE The world we live in is a fragmented reality. We live today in an era where we constantly sample, curate, squeeze, and assemble fragments of time and urban space through Facebook, Twitter, Snapchat. In the era of internet, Google maps, and Gis softwares, the city becomes scale-less and content-less. You decide where to position yourself in the city, at what scale you want to experiment and from what point of view you want to approach things around you. You define your own content. The image of the city is created through our own perception and narrative. The city becomes a self-portrait of ourselves. What is today the time span of a city? What its image and its identity? CREATING MOMENTS Our mission is to redefine the image of the city embracing the shortest and possible media able to convey transformation. Our aim is not to produce an image of London, yet to produce the image of a Londonâ&amp;#x20AC;&amp;#x2122;s moment using gif and animations no longer than two seconds. We want to embrace the reduced timeframe of the gif, the tweet, the online post. We believe that this conceptual relationship between time and space can be pushed enlarge or shorten time. The interactions between two or more moments can create a new city of London. Which are the spatial changes displayed in the time span of a selfie or a two seconds gif? Can you design a moment?

A NEW gifMANIFESTO Gif is a new language The graphics substitute words, creating a visual alphabet Gif is the media of action They are movement; which is the visual representation of change. Gif is a visual characters The ideograms of the contemporary constantly expanding universe of Internet communication. The gifs are emotional upgrades of obsolete way of communication such as the written words. Gif works through repetition The loop creates new meaning through repetition. Reiteration a narrative device. Gif is a moment The compressed time frame of a gif is the most direct way of conveying change, Transformation, evolution. The image is the mean. The gif is the mean of change and movement. It is a memory of an irrepetible moment. Gif has no authorship They are fragments, stolen pieces of media. They are fragments of reality, films and imaginations. Gif is a concept Every gif convey one specific idea. Every idea is unique, yet endlessly shareable. Gif is a project Gifs are stolen. Gifs are quotation, reinterpretations, fragments of reality and other media. The expanding universe of Internet communication is our worldwide knowledge. Gif is viral Gifs have to potential to expand their audience. They can spread ideologies. They are a project. Gif is perception Gifs are the forthcoming language that does not need translation. Pure flow of visual consciousness.

SCHEDULE 4th July- 8th July RECORD The frst week serves as a data collection from all types of online platform. The students are invited to choose moments and fragments which they they can relate to the city of London and to the idea of time. The research will take place through different tools: mapping trajectories, taking pictures or recording videos. Each student will build its own argument choosing only one element. What is your momentum? What is your time span? 11th July- 15th July CONNECT The second week is the moment of weave the pieces within each other. The students are invited to exchange moments and to find a thread throughout them. A new map will be created with the new data accumulated. Where do you place your moment within this new city? How do you deal yourself, as a architect within this continuum? 18th July- 22nd July CREATE The third week is when the students will put forward a proposal using the media and instruments used to investigate the city. Whereas a speculation or an actual proposal, the aim is to create a collective knowledge of a city which is changing every day, every hour. The final output will be twofold. On one hand we have the ambition to produce a collective image of a Londonâ&amp;#x20AC;&amp;#x2122;s Moment. The Class will be asked to produce a collective document able to describe a specific moment of their London experience. On the other hand, smaller group of students will produce spatial proposals that should be argued and described through their ability to create new moments in the city. Therefore, those proposals should be described and displayed with coherent media: GIFS, Status, Social Media profiles etc.

Valerio Massaro Architect. 2016 MPhil Candidate Projective Cites, AA School of Architecture. His current research revolves around housing in London; how embracing neo-liberal ethos can allow a different form of ownership; and rethinking of services provision and infrastructures. He holds a Professional Degree with honors from DIDA (Dipartimento di Architettura), University of Florence, Italy. In the university of Florence, he collaborated as tutor in urban design and landscape courses and in computer aided design. He worked as architect and 3d modeler in different practices in Italy and the U.K. and founded and supervised as art director the webzine NIPmagazine.it from 2010 and 2015. Sabrina Morreale AADip graduate 2016. Her projects have always been related to the idea of fragmentation, using different media, enhancing the process of how things are made and assembled together. She worked in several offices as architectural assistant in London and she is still collaborating with the Oxford Press as illustrator. She is currently working on the construction of a hand-crafted pinball machine. Bibliography http://www.eamesoffice.com/the-work/powers-of-ten/ http://www.timeanddate.com/time/time-zones-history.html https://www.khanacademy.org/humanities/global-culture/conceptual-performance/a/vito-acconci-following-piece https://www.instagram.com/?hl=en https://www.tumblr.com/ https://www.snapchat.com/l/it-it/ https://twitter.com/?lang=en-gb https://www.facebook.com/ http://barbaslopes.com/np4/31/%7B$clientServletPath%7D/?newsId=139&amp;fileName=COLLAGE.pdf http://giphy.com/search/giffy https://www.youtube.com/watch?v=WDpKzaKcmYA

Encyclopedia Fragments a small piece or a part.

form of an electronic image

Time the part of existence that is measured in minutes, days, years, etc., or this process considered as a whole

Lapse a period of time passing between two things happening

Graphic Interchange Format: a type of computer file that is often

used for images on the internet

Interaction Ideology Ideas, concepts and theories an occasion to communicate with

Future a period of time that is to come

or react to each other

Span the period of time that sometimes exists or happens

Real things as they really are, not as they exist in the imagination, in a story, on the internet, etc Compression Squeezing and grinding

Unit a standard measure Alteration a change, usually a slight change, in the appearance, character, or structure of something