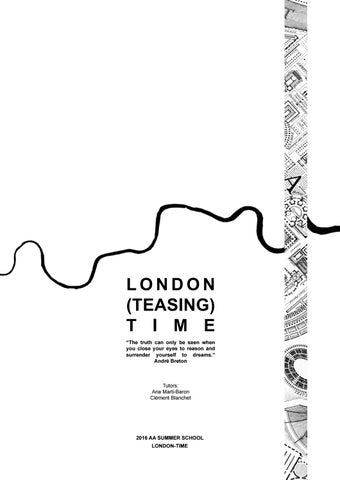 LONDON (TEASING) T I M E “The truth can only be seen when you close your eyes to reason and surrender yourself to dreams.” André Breton

BRIEF “The imaginary is what tends to become real.” André Breton Every year, hundreds of thousands of tourists from all over the world descend on the Royal Observatory in Greenwich to pose for a photograph astride the Prime Meridian, the famous line where east meets west and where each day, year, millennium begins. The location of the original Greenwich Meridian was agreed upon at a meeting in Washington DC in 1884, after a vote involving 25 nations. Creating a universally recognized position of 0 degrees longitude allowed accurate global navigation, standardized maps and the creation of time zones. There is just one problem: according to modern GPS systems, the line actually lies more than 100 meters to the east, cutting across a nondescript footpath in Greenwich Park near a litter bin. The unit will expand the Greenwich Meridian into the third and the fourth dimension in order to emerge a new territory to invent, speculate and design new worlds. We will design a fragment of London that goes backwards and forwards through time. We will learn to design for a time-span, not just a single moment. We will reconsider the new territory of the Greenwich Meridian as our primary laboratory for ideas and actions How can a line expand to the third and fourth dimension and become an architectural moment? How to design for a time-span? How to imagine a city as though experienced along its continuum? How to keep the form and the culture of the city in this new fragment of London? How does this neo Decumanus engage with the existing city? We will propose the sets for a new Game: a game engaging the past and the future. The reasons or criteria’s to invent this new piece of London should be constructed based on different themes, either could they be subjective and objective. We will define our own context with absolute conceptual innocence. As Piranesi did in his plan of Rome in 1761, we will span and overlap our new world as the product of a free run of imagination. In order to explore all the possibilities of this new fragment of London we will use the Surrealist technique of the Exquisite Corpse. The Exquisite Corpse (from the French original term Cadavre Exquis) is a game invent by the Surrealists in 1925 to free the mind by which a collection of words or images is collectively assembled. Each collaborator adds to a composition in sequence, by following a rule and by being allowed to see only the end of what the previous persons contributed. According to André Breton, one of the major figures of the Surrealism group, it started as a fun activity: “Although, for defense reasons, sometimes this activity was called by us ‘experimental’, we wanted it above all entertainment. What we were able to discover rewarding to in respect of knowledge, just came later.” AA SUMMER SCHOOL 2016 LONDON-TIME

OUT PUT Students will work as a group to achieve consistency across the work. Graphic styles and techniques in all the research and design phases will be carefully set out by the group in order to achieve this. Digital tools will be introduced but the focus will be on working with hand made techniques as big drawings, collages, and model making. The construction of a big scale artifact of the new Greenwich Meridian territory will be the masterpiece of the unit. This artifact will be a three-dimensional art attempt to represent a timeless fragment of the city of London. It will have to represent the instable past, present and future of London. This piece will act as manifesto. Each student could carry home its masterpieces of the cadavre-exquis.)

SCHEDULE Students will work individually, in pairs and as a group. The unit will envision architecture as a way of thinking. We will investigate mechanism of participation, action and discussion as major tools to generate spatial and urban processes. The methodology will be a constant critical point of view: a continuous debate and discussion where nothing is granted. Exploration will be part of the process. Discussion and exchange about the work in progress will be an important part of the daily overall structure of the unit. Every week an external visitor will come to the studio and share his or her expertise according to the common issues. We wish to invite Madelon Vriesendorp and other special guests to share our visions and discoveries about our new Greenwich Meridian territory. WEEK 1 “The truth can only be seen when…

Introductions and Presentations / One day visit along the London Greenwich Meridian site / Everyday will start with a group discussion about the work in progress / London’s historical research / Each pair of students will explore a specific time frame of London and how its form and culture could be translated / Define the Greenwich Meridian new territory and its context. Document 1: Students will work in pairs. Every pair will produce a big scale collage with its layer information. The unit will produce a common informed “Musée Imaginaire” containing the illustrated statements and promises that will define the new Greenwich Meridian territory.

WEEK 2 … you close your eyes to reason and …

Urban and architectural research / Discuss and explore the form and the culture of this new territory / Define the rules of this new territory / Design and invent new worlds. Document 2: Students will work individually. Each student will produce a big scale drawing to be inserted in the Greenwich Meridian new territory. Each student will also produce a booklet containing all the research and the outcome documents including plans, diagrams, sketches, texts, collages, models, etc.

WEEK 3 … surrender yourself to dreams.”

Define the character and the substance of the artifact to be produced / Define all the techniques and graphic styles / Design the artifact / Define and organize the work to achieve / Construct the artifact as a tridimensional experiment compiling a before, a now and an after. Document 3: Students will work as a group. The group will produce a big scale artifact containing the research and projects of the last two weeks.

Clément Blanchet is a French architect, teacher and critic, actively practicing in the fields of architectural theory, urbanism, and cultural investigations. Clément Blanchet is an ex -Associate of the Office for Metropolitan Architecture, where he joined in 2004. In 2011, Blanchet was appointed Director of OMA France. During his 10 years collaborating with Rem Koolhaas, he has contributed to the development of OMA in France and led several winning project for the firm, including the construction of Serpentine Gallery in London, the design and construction of Caen Library (Completion 2016) in France, the design and development of winning entries like the Convention and exhibition Centre in Toulouse, the Engineering school of Centrale, master plans in Saclay and in Bordeaux, and lately the bridge JJ Bosc over the Garonne in Bordeaux. In May 2014, CLEMENT BLANCHET ARCHITECTURE is founded in Paris. The practice is structured as a laboratory, researching, informing and generating architecture / urbanism in all its forms. From a selection of projects, cBA is currently developing competitions for the redesign of the Ferry Boat Terminal in Toronto, major office headquarters in Toulouse and is designing a high rise in Nice, as well as continuing the finalization of Caen library in collaboration with OMA. He graduated with high honors from the Architectural school of Versailles and has been an invited critic to Architectural schools in France, England, Holland, Denmark & Sweden. He currently teaches at Paris Val de Seine Architectural School and the University of Michigan.

Ana Marti-Baron is a Spanish architect and landscape architect actively practicing in the fields of landscape, urbanism and public space. She studied in the Ecole Nationale du Paysage de Versailles-Paris ENSP and graduated with honors in Urbanism and Architecture from the Architectural School ETSAB in Barcelona in 2003. She worked in the Urban Projects Department of the Barcelona City Council before joining the office of MDP Michel Desvigne Paysagiste from 2003 to 2015. Since 2004, she was in charge of some major projects of the office at very different scales like the Burgos Master plan with Herzog & de Meuron, the Master plan for all the public spaces of the city center of Toulouse, the urban renewal for the redevelopment of a 37 hectares industrial site or a 45 hectares park on the right bank in Bordeaux among others. In 2016, Ana opens her own practice. Based in Paris, the practice is structured as a laboratory for urbanism, landscape and public spaces in all its forms, scales and contexts. She is currently working on projects in France, England and Romania like the development of the Master plan for a new mixed-use district in the industrial site of Fives Cail in Lille, including the design of all public spaces. Ana has taught at the AA Architectural Association in London during the 2014 AA Summer School where she was teaching Unit 3 with Clement Blanchet. She has also taught at the Ecole Nationale Supérieure Paris Val de Seine in 2015 as an invited teacher. She has also been an invited critic at the Ecole Spéciale d’Architecture of Paris and at the Ecole Nationale Supérieure de la nature et du paysage de Blois (France).