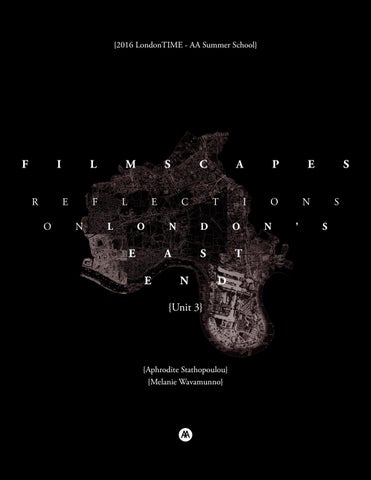 The city can be conceived as an archive of a place’s history. Most importantly, as an accumulation of time and space it can be understood and represented as narrative. Much like literature, film, poetry and any form of storytelling, the city can be perceived not only as a process of development, planning and occupation of space, but also as a dialectic interplay between body and place; a form of communication. While the body navigates physical space, mental processes help construe associations, create and link memories and assumptions in ways that can distort physical constraints such as scale, spatial sequences or adjacencies. Under this scope, cities as ideological reflections can in many ways escape, reinterpret and ultimately affect /design reality. London has been transformed over time into an abstract space, which from the 19th century onwards has served as a site that encompasses diverse forms of urban life; working-class restlessness, modernity, immigration, rationality, unitary interests and top-down development. In particular, London’s East End has been a field where these opposing forces have had a significant imprint to the urban fabric, resulting in temporal and contextual disparities. The East End of London is situated to the east of the Roman and medieval walled City of London - bounded by the Victoria Park to its north, the River Thames to its South and the River Lea to its east. The collective perception of the East End has evolved radically from a stigmatized place of debilitating poverty, disorder and crime, to a celebrated place of mystery, creativity and youthful urbanity. The East End’s varied and distinctive urban fabric is owed largely to its formative history as the 19th Century industrial heart of London, absorbing waves of immigrants and skilled workers. Subsequent slum clearance programmes, targeted bombings of industrial sites during the Second World War and recent urban regeneration plans that include the Canary Warf development and the Olympic Park have shaped the current built landscape of the area. With the East End as our site, the unit will approach the understanding of the city under three given urban topics that will serve as lenses through which students will be asked to reveal their spatial environment: 1. 2. 3.

The objective is to develop an enriched reading of the ever-changing city. We will employ on site research, photography, mapping, and collage - all leading up to the studio’s final product: a short (two minute) stop-motion film; a collage in time, which will in itself serve as a mental-archive of London’s East End, focusing on a team-determined subject under the assigned lens. In addition to readings, discussions and multi-disciplinary representation of the urban development of London’s East End, the unit structured as a combined studio/seminar - will inquire into how visual representation and narrative figuration contribute to construct urban identity. Theoretical subjects to be explored in relevant weekly film-screenings and texts include: panoramic vision, collage & urban flânerie, modernity, and montage. Utilizing smart-phone photography and video production software in a post-modern technological society, part of the unit’s dialectic will delve into questions of traditional authorship as a means of interpretation and creativity. Throughout the course of the three weeks, student work will be regularly catalogued, documented and published in a designated blog, encouraging its exposure, interaction and feedback from the wider public.

Instructional Methodology The course is structured as a combined seminar/studio. Students are expected to both develop and exercise technical skills within the studio environment and respective reviews and to articulate, discuss and criticize theoretical concepts; participating in weekly lectures and relevant screenings. Besides on site research and analysis and related readings, theoretical aspects of film will be presented and discussed, which will serve as basis for critical studies, research and studio exercises. Besides internal studio discussions we have arranged a few visiting lectures on film and mapping throught the course. There will be two projects for the unit: First, a collage illustrative of an individually student-chosen theme under an assigned lens, accompanied by a collective studio mapping of students’ trajectories and meeting or interest points in London’s East End, as tracked by a GPS application. Second, a short stop-motion film - a collage in time - which will elaborate further on the topic previously illustrated. Studio Material will be regularly compiled documented and collectively posted on an online platform, encouraging its exposure and communication toward a wider audience.

Unit 3: Bibliography & Filmography Apart from site-visits, relevant lectures and readings on London’s East End the unit will map out three broader theoretical frameworks/subjects which will serve us underlying theoretical knowledge, as a supplementary context to studio-based exercises. Lectures, readings and screenings will be structured accordingly, to be mapped out in their designated weeks. Complementary to collective studio presence and work, reading and attendance of all lectures and screenings are obligatory. *Summer Movie Nights: Screenings will be taking place biweekly at the AA roof terrace

Unit 3: Staff - Short Bios Aphrodite Stathopoulou is an architect and urban designer currently working at the Basel based practice, Harry Gugger Studio. She holds a MArch from National Technical University of Athens, Greece and a Master of Architecture in Urban Design with Distinction from Harvard University’s Graduate School of Design. Throughout her studies, she has been awarded the Harvard Grant, the Gerondelis Foundation Scholarship, and the GRE AT 2013 award. Aphrodite has worked on urban, civic and residential projects and has participated in award-winning competitions in Athens, Boston and Basel. As part of Harry Gugger Studio, her work includes urban studies and competitions as project leader. Aphrodite has taught an introductory Urban Design studio at the Harvard Graduate School of Design Career Discovery program. In addition, she has lectured and participated in jury panels in institutions such as the Boston Architectural College and the Rhode Island School of Design. Aphrodite’s work has been featured in several publications & exhibitions in Athens and Boston, including the Harvard GSD Platform publication and exhibition 2013 and 2014. Her academic research, focuses around the themes of cartography and the historic city, emphasizing ideas of collective memory, perception and experience of a place. She frequently experiments with various forms of representation including, mixed media, film and collage. Throughout her work, she has been focusing on the process of systemic thinking, aiming for coherent design narratives that have a wider cognitive or educational impact and she is committed to combining these efforts into her teaching.

As a practicing Part II Architect, Melanie Wavamunno currently works at the London based practice, Adjaye Associates. Melanie has worked on completed projects in Uganda and Lebanon, and has ongoing work in the cities of London, Johannesburg, Los Angeles and Munich. Her projects range in scale and typology from small residences to large public museums. Melanie has an AA certficate and holds Bachelors degrees in Fine Arts and Architecture (BFA and BArch) from Rhode Island School of Design, as well as a Master’s of Architecture in Urban Design from Harvard University’s Graduate School of Design and a certificate from the AA. In 2014, Melanie was one of two students selected for Harvard Art Museum’s Division of Academic and Public Programs’ highly competitive annual graduate internship programme. There, she developed interpretive materials for the 2014 Renzo Piano Harvard Art Museum extension. During her time at RISD, Melanie engaged with her interests in form, material and the representation of space by developing a variety of visual experiments in film, photography and printmaking.These were exhibited in the Granoff Gallery at Brown University and the Bayard Ewing Building at RISD. Melanie was also a teaching assistant under RISD Professor James Barnes and has participated on jury panels at RISD and Harvard University GSD’s Career Discovery. In practice, as in teaching, Melanie enjoys the critical discourse that emerges out of design saturated in culture and difference, in theory and physicality. There are meaningful discoveries and revelations to be made in mistakes, in awkwardness and misalignment, in bodily experience, in appropriation, in mistranslation, in getting lost. The profession of architecture allows us the means to enter other cultures intensely and playfully, but also responsibly.