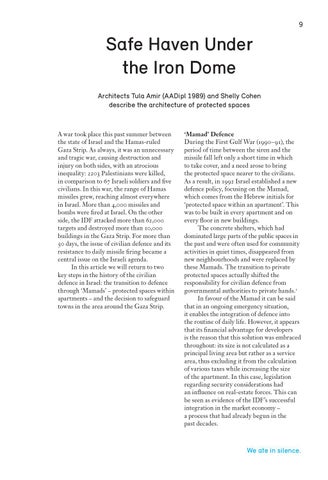 A war took place this past summer between the state of Israel and the Hamas-ruled Gaza Strip. As always, it was an unnecessary and tragic war, causing destruction and injury on both sides, with an atrocious inequality: 2203 Palestinians were killed, in comparison to 67 Israeli soldiers and five civilians. In this war, the range of Hamas missiles grew, reaching almost everywhere in Israel. More than 4,000 missiles and bombs were fired at Israel. On the other side, the IDF attacked more than 62,000 targets and destroyed more than 10,000 buildings in the Gaza Strip. For more than 50 days, the issue of civilian defence and its resistance to daily missile firing became a central issue on the Israeli agenda. In this article we will return to two key steps in the history of the civilian defence in Israel: the transition to defence through ‘Mamads’ – protected spaces within apartments – and the decision to safeguard towns in the area around the Gaza Strip.

‘Mamad’ Defence During the First Gulf War (1990–91), the period of time between the siren and the missile fall left only a short time in which to take cover, and a need arose to bring the protected space nearer to the civilians. As a result, in 1992 Israel established a new defence policy, focusing on the Mamad, which comes from the Hebrew initials for ‘protected space within an apartment’. This was to be built in every apartment and on every floor in new buildings. The concrete shelters, which had dominated large parts of the public spaces in the past and were often used for community activities in quiet times, disappeared from new neighbourhoods and were replaced by these Mamads. The transition to private protected spaces actually shifted the responsibility for civilian defence from governmental authorities to private hands.1 In favour of the Mamad it can be said that in an ongoing emergency situation, it enables the integration of defence into the routine of daily life. However, it appears that its financial advantage for developers is the reason that this solution was embraced throughout: its size is not calculated as a principal living area but rather as a service area, thus excluding it from the calculation of various taxes while increasing the size of the apartment. In this case, legislation regarding security considerations had an influence on real-estate forces. This can be seen as evidence of the IDF’s successful integration in the market economy – a process that had already begun in the past decades.

We ate in silence.