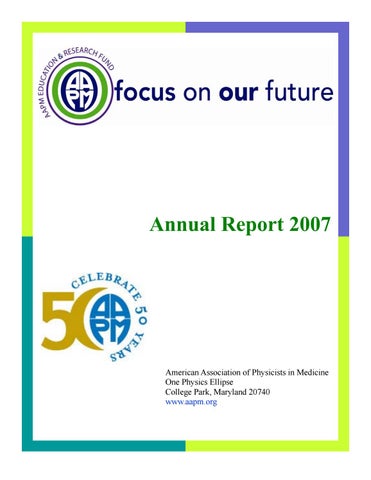 relied upon to sustain its awards programs into the future without continued infusion of new funds.

Dear AAPM Members: It gives me great pleasure to present this Annual Report for the AAPM Education &amp; Research Fund for 2007. On the following pages you will read of the accomplishments for the year. On the last page we present a list of contributors to either the general fund or a named fund during the calendar year. The members of the Development Committee, as well as the award recipients, want to thank you for your contributions and continued support. Included with hard copies of this report, you will find a contribution envelope for your convenience in making your contribution for 2008. If you wish to make a contribution on line, please go to the AAPM web site at www.aapm.org and click on the Education &amp; Research Fund logo at the top right corner. We are hoping that each member, in this our 50th year, will contribute to this effort.

The AAPM Education &amp; Research Fund is your way to give back to the medical physics community.

AAPM Education &amp; Research Fund 2007 Annual Report The AAPM Education &amp; Research Fund is pleased to present this Annual Report on the contributions and achievements made during 2007. The purpose of the fund is to support Fellowships for Ph.D. candidates in Medical Physics at institutions accredited by the Commission on Accreditation of Medical Physics Educational Programs (CAMPEP). Currently there are 17 institutions eligible to receive these awards. The Fund also supports clinical residencies, including seed money for research. Twenty-two institutions are now accredited by CAMPEP and are eligible for these funds. In addition to the general fund, with a balance of $1.1 million as of December 31, 2007, there are a number of named funds containing donations in honor of deceased AAPM members. The Members Memorial Fund currently contains just over $56,000. The History Fund has contributions totaling just under $20,000 and the International Funds total just over $15,000. Since 1992, the Development Committee has actively sought renewable funding to sponsor residencies and fellowships in medical physics. In addition to awards directly from the AAPM Education &amp; Research Fund, RSNA and ASTRO have generously supported residencies and fellowships through the AAPM Education &amp; Research Fund. Varian Medical Systems also supported two residencies in Clinical Radiation Oncology from 1993 through 2007. All such Residencies are supported by matching funds from the host institution. Beginning in 2005, under the auspices of the AAPM Science Council, an annual grant of $25,000 has been awarded to new investigators as “seed” money to stimulate their research. Recipients must be within 5 years of having received the Ph.D. degree and have not received grants exceeding $50,000. In 2007, Science Council voted to expand this to two awards of $25,000 each. In 2007, contributions into the Fund totaled in excess of $19,000. Investment earnings totaled $75,156. Awards from the Fund totaled $136,500. Obviously in 2007 the Fund did not receive enough contributions or income to cover its distributions. Since investment earnings are dependent upon financial markets, this source of income to the Fund cannot be

2007 Awards The following are details from several of the current award recipients. Dr. Marco Carlone was the recipient of the 2007 AAPM Research Seed Funding Award. He is a Medical Physicist at the Cross Cancer Institute in Edmonton, Alberta, Canada. His research project, Study of RF Interference Between a Medical Linear Accelerator and an MRI, is well underway. This research project is focusing on identifying, explaining, and quantifying the source of RF noise due to a medical linear accelerator. Dr. Carlone reports that “the funds provided by the AAPM for this research project have been invaluable in constructing the experimental linear accelerator modulator, and making it operational. This tool will provide a unique experimental apparatus for studying RF generation from a medical linear accelerator.” Dr. Todd Pawlicki of UC San Diego received the AAPM/ASTRO Residency award in 2007. He was charged with establishing a medical physics residency program when joining the faculty in 2006 and has been successful in securing funding for two resident positions. “I joined the faculty at UC San Diego in September 2006. One of my first charges was to establish a Medical Physics Residency Program. Our first step in that charge was to obtain funding for our Residency program. We were in the process of applying for the AAPM/ASTRO Residency Award during the time of discussions with our hospital program funding. It was helpful for our hospital administrators to know that external financial resources were available to assist in program start-up. We were finally successful in securing on-going funding for two resident positions. Since securing program funding from the hospital, the AAPM/ ASTRO Residency Award has been used for continued program start-up activities such as starting a medical physics library, recruitment for the second residency position, and program administrative support. It is also funding the CAMPEP accreditation process.“ Scott &amp; White Memorial Hospital in Temple, Texas, was also awarded an AAPM/ASTRO Residency in 2007 under the direction of Dr. Arthur Boyer. When Dr. Boyer joined Scott &amp; White in 2005, the Chair of the Radiology Department, Dr. Gill Naul, agreed to fund the initiation of a Radiation Oncology Physics Residency. On November 29, 2006, Dr. Bruce Gerbi confirmed that CAMPEP would entertain an application from Scott &amp;White for a Physics Residency. The Senior Staff and Staff of the Physics Division began planning the program. It was agreed that both diagnostic and therapy physicists would participate in the program in recognition of the strong imaging emphasis in the current practice of radiation oncology. An initial outline and draft of a Self-Study, required as a part of the application for accreditation by CAMPEP, was initiated in the spring of 2007.

Dr. S. Cheenu Kappdath at the UT M.D. Anderson Cancer Center in Houston was awarded the RSNA Medical Physics Residency Award for 2006-2008. Dr. Kappadath completed his residency in October 2007 focusing in nuclear medicine physics. With a solid background in radiological physics from his two-year tenure in Dr. Chris Shaw&#39;s lab, his completion of the residency with a focus in nuclear medicine physics made him a highly sought after &quot;double-Boardable&quot; medical physicist. Dr. Kappadath is currently on the faculty and supports the growing clinical research program in nuclear medicine, primarily in positron emission tomography (PET) at Anderson.. Dr. Kappadath will also provide support for the x-ray and nuclear imaging clinical research resources in their new Center for Advanced Biomedical Imaging Research slated to open in mid-2009.

tion of this document, the remaining funds will be utilized towards the CAMPEP application fee. Dr. Prisciandaro writes “We would like to thank both ASTRO and the AAPM for considering our application, and for their generous support. We have found this grant extremely helpful, as it has allowed us the necessary release time to concentrate on the CAMPEP documentation. We would strongly encourage other institutions in the process of accreditation to apply for this training grant.” David Bennett is the recipient of the 2006-2008 AAPM Fellowship and is working in the Center for Advanced Surgical and Interventional Technology at UCLA, under the supervision of Dr. M. McNitt-Gray. He is pursuing the fabrication end of a multidisciplinary project to build a flexible, conformal medical ultrasound system. He has designed and built novel flexible medical ultrasound transducers using microfabrication processes. These devices are currently being thoroughly tested and characterized, and will soon be used to assess the image reconstruction algorithms CASIT has designed for conformal ultrasound acquisition.

An AAPM/RSNA Fellowship for two years was awarded to Matt Vanderhoek at the University of Wisconsin in 2005. He is currently in his third year of a graduate program in medical physics at the University of Wisconsin - Madison. The Fellowship Award helped finance his first two years of graduate school. Matt states: “the fundamentals of medical physics that I learned in my first 2 years of graduate school (supported by the fellowship) are providing and will continue to provide me with an excellent foundation for my research in the use of PET The Medical University of South Carolina, under Dr. Kenneth imaging for assessment of treatment response in chemotherapy Vanek, received a 2007 AAPM/ASTRO Residency grant and patients and in my future career as a medical physicist.” reports that this grant has been the catalyst that they desperately needed to secure hospital funding for their radiation Bart Lynch at the University of Florida is the latest recipient of a oncology physics residency program. They have been suctwo-year fellowship from the AAPM/RSNA Fellowship from the cessful in incorporating this residency into their GME program AAPM Education &amp; Research Fund. Mr. Lynch is working to and are receiving some administrative support from this office further understand the impact of breathing motion on delivered as well. This relationship with the GME office is extremely dose distributions for lung cancer patients. He is using dosimet- helpful in many areas such as orientation, utilization of the ric parameters related to the incidence of radiation-induced existing resident handbook, established policies and procepneumonitis as a metric to compare 3D and 4D dose distribudures concerning residents, an electronic evaluation system, tions. etc. In the application process, his institution gave selection preference to students who had graduated from CAMPEPMedical Physics residencies supported by the Varian/AAPM accredited academic programs. They received 15 applicaResidency Award for 2005-2007 went to several residents at tions from CAMPEP programs plus an additional 28 from non Washington University Radiation Oncology Department, Divi-CAMPEP programs. Their first resident will be starting July sion of Medical Physics, under the direction of Dr. Eric Klein. 1st. These include: As you can judge, the impact of these funds on the training of future medical physicists is very far reaching and will benefit • Mark Wiesmeyer, Ph.D. is currently an Assistant Professor at the Virginia Commonwealth University and is now certified by our field of medical science for decades to come. The Develthe ABR. He completed his program at Washington University opment Committee would like to thank all who contributed in 2007. The following is a list of 2007 contributors. The memin 2006. sup• Anna Kress, M.S. is a physicist at the Dr. H Bliss Murphy Can- bers of the AAPM Development Committee ask for your port of these valuable research efforts. In this our 50th year, cer Centre in St. John’s, NL, Canada. Ms. Kress completed AAPM has much to celebrate, the least of which is the contriher program this year. bution to science made by recipients of grants from the Edu• Dharani Rangaraj, Ph.D. completed his program in 2007 and cation &amp; Research Fund. is now an Instructor at Washington University in St. Louis, MO. • Hui Zhao, Ph.D. is a current Resident who will graduate in We are asking all AAPM members to make a contribution to July of 2008. the Education &amp; Research Fund this year. Use either the envelope in paper copies of the report or go to The radiation oncology residency program at the University of www.aapm.org and click on the Education &amp; Research Fund Michigan was the recipient of the 2007 AAPM/ASTRO Radialogo on the top right corner of the page. Let’s all help contion Oncology Physics Residency. The radiation oncology tinue this tradition of supporting the future generation of Mediresidency program at the University of Michigan was estabcal Physicists. lished in 2002 and since its inception, has graduated six residents, including one visiting Israeli fellow. At present, there are five residents who are in various stages of the program. This grant helped offset the clinical salary of the residency coThank You! director, Joann Prisciandaro, Ph.D., to allow her to focus on the program’s self study documentation. As they near the comple-