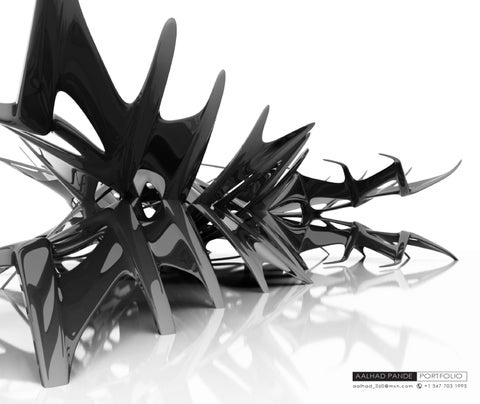 This sculpture was done as part of the Shades and Shadows workshop where paper was used as a medium to create a range of shades and shadows through juxtapositioning of numerous panels with cut-outs. The exercise was an introduction to the importance of Sciography in the field of Architecture.

Location: Roosevelt Island, NY Critic: Erich Schoenenberger Duration: 16 weeks The studio focussed on the potentials of Bio-Mimicry as a strategy for form finding, program organisation as well as the investigation of structural solutions. In simple terms it is the science of getting ideas from nature for the way we make or do things. For this project, a study on the organizational structure of Phytoplanktons was undertaken to develop a proposal for a Marine Research Center at Roosevelt Island, NY. The various interactions were diagrammed in order to develop a spatial understanding with respect to scale and aesthetics. The project would act as a catalyst for the regeneration of the Island which has historically been known as the Institutional Base for the city.

Pre-Independence, All India Radio was one of the most important media of information. The first sound of independence spread across the country through AIR. The vernacular approach of AIR has become the one voice of the majority of Indian population. The industry has rapidly changed and continually reinvented itself with newer technology. However, AIR has kept itself aloof from these changes. Newer work forms and means seem to be a decade away from the government offices and AIR is no exception.

The project is an attempt to revamp the existing monotonous working environment into a more fun, and creative one, which echoes the progress of AIR as the station for the youth. Constricted spaces are opened out to encorporate a fluid planning system. The hierarchical system is dropped for a more interactive work environment in order to encourage flow of ideas across all levels. The outer facade becomes a continuously changing digital interface to broadcast news as it occurs. A stepped entrance plaza becomes a dynamic interaction space for the youth and doubles up as a performance spae in order to give a much needed creative impetus to the institution.

Institute for Defence Studies and Analysis

Bharadwaj Bharadwaj and Associates Ideas Competition Location: New Delhi The Institute for Defence Studies and Analysis is one of the premier institutes that caters to the defence and political think tank of the nation as well as the entire Asia-Pacific region. Situated in the Cantonment area of New Delhi, the institute is characterized by its rotunda-like library that encloses a central open space along with the main wing. The objectives of the concept design report were mainly to provide recommendations for improvements in three aspects: - the entry of the building (mural) - the main access areas: the entry foyer and lobbies (Wall Cladding), and - the major central open spaces: the Quadrangle (landscaping)

SKETCHES Power, strength, great ideas, learning and sky high achievements. Metals used to make a striking and everlasting impact on the minds of the viewers. 06

Nine lines representing nature, nation, defence and democracy, knitting together, forming three directions to achieve strngth and enlightment. Knowledge and lines are two entities. Create a thought process in the viewer about the strength and the unity of our nation and gives vertical scale to the entrance facade.

The shining orbs of achievement: Knowledge, Skill and Power.

ZONE OF MOST ACTIVITY

Bharadwaj Bharadwaj and Associates, New Delhi Location: Faridabad Phase: Under Construction The project is a 4-star resort at Faridabad, 30 kilometres from Indira Gandhi International Airport, New Delhi. The site is located in a pastoral setting and therefore the client wanted to retain the character of the place. The plan follows an S- curve to give long sweeping views of the country-side. The resort consists of 40 deluxe rooms and 4 suites along with a restaurant, bar, health club and discotheque The building materials utilized are from within a radius of 50 kms from the site, thereby reducing transportation cost. Construction on the project began in January 2010.

These construction documents were completed for Phase 1 of Construction

Mumbai is home to an ever increasing population of homeless children who are forced into unpaid labour jobs and other menial work. They are deprived of a clean healthy life and are subjected to mental and physical abuse. The main objective of the Night Shelter is to give these children a clean and safe place to stay and keep them away from day to day vulnerable situations. A play-off on Wes Jones’ idea of the ‘Hackers House’, the scheme uses large

shipping containers as the building blocks for the night shelter. Material from these containers is recycled and made fit for habitation, thereby cutting down on building costs, at the same time maintaining an eco-friendly approach. The blocks can be easily transported and assembled on site as per requirement.

Location: Chandigarh, India Critic: Y.D. Pitkar Duration: 16 weeks Chandigarh has risen from a relatively new city on the 1950â&amp;#x20AC;&amp;#x2122;s to being one of the richest cities of india. each decade has seen a tremendous increase in pressure over land leaving only a few areas for urban regeneration. The city has undergone changes in terms of financial viability and its area.

The project aims to propose a suitable strategy for densification &amp; future use of the low density sector-22 which could further be used as a module for others sectors. The studio focussed on the potential of Restructuring Sector 22 into a Medium Density habitat.

Duration: 15 Weeks Team: Aalhad P, Shalini S. This elective focussed on the derivation of complex systems through the computation and simulation techniques in Maya. Existing artworks/installations were studied and broken down into smaller study diagrams which were then simulated in Maya using MEL Scripting and nDynamics. In this exercise, the installation at the BMW Museum by ArtCOM was studied and sub-divided into smaller units based on behavioral changes. These changes were encorporated into the final scheme using animation techniques.

FA B R I C AT I O N Critic: Jeffrey Taras Duration: 2 Weeks Team: Aalhad P, Tony M, Shalini S, Nisha B. This introductory exercise concentrated on using digital technologies and translating them into basic analog fabrication schemes. A component study was conducted in Generative Components after which an analog aparatus was conceived in order to achieve similar results without using adhesives. The aparatus was enabled to change in certain parameters in order to create a varied result on the component assembly. The chief materials used were wood, wire and plastic sheets.

ANALOG APPARATUS MADE WITH WOOD

Location: New Delhi Critic: Shakti Parmar I Y.D. Pitkar Duration: 20 weeks The City Museum is imagined as a forum for the exchange of ideas pertaining to the development of New Delhi as a bustling Metropolis. Situated on the banks of the Yamuna river, the museum aims to transform the currently dysfunctional region into a hub of creativity and knowledge. The museum aims to take the visitor through the various stages in the development of Delhi as a mega-polis. The general movement is in a chronological order of important events in the history of Delhi. However, visitors also get the option of choosing their own path, thereby leading to a more flexible scheme.

There are various components which come together to form the image Delhi- the street culture and the radial planning form an integral part of Delhi. These have been retained to give the museum a connection with the “Delhi way of Life”. The City Museum is an educational cum interaction forum for the citizens of Delhi as well as tourists to help understand the dynamics of the city. Citizens and tourists are made aware of Delhi’s unparalleled history, the present and the future. The citizens will have an active say in the future development of the city as the City Museum will provide them with a platform to give suggestions on various upcoming large scale projects which will affect the citizens in a direct manner. N

M.S Architecture, Thesis- Spring 2011 Location: Anywhere Critic: Jason VIgneri-Beane Vito Hannibal Acconci Duration: 15 weeks Rapid urbanization leads to suburban expansion. cities are no more contained to a few milliion people. however, a lack of maintenance infrastructure leads to the formation of urban holes in a state of decay within city limits. Can these structures to be explored to support the creation of new retrofit micro environments. Our way of living is fragmenting at a rapid rate due to the increasing dependence on technology. In a scenario four decades into the future, this situation will only aggravate forcing us to rethink the way we inhabit structures. large buildings will gradually give way to smaller, mobile architecture which is governed by a need for individual customization. At the same time, it is essential to examine the possibility of connecivity between these units to create conditions dynamic interchange.

CITY IMAGINED AS A NETWORK OF RETROFIT CONNECTIONS

PERSPECTIVE OF THE UNIT

This is my portfolio consisting of academic and professional works.