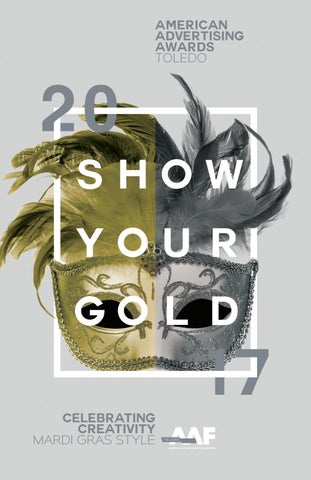 A LETTER FROM THE PRESIDENT ABOUT THE AWARD SILVER MEDAL AWARD

OFFICERS & BOARD OF GOVERNORS

A LETTER FROM THE PRESIDENT

Congratulations to the winners of the 2017 American Advertising Federation (AAF) of Toledo American Advertising Awards (ADDYs). The high-quality work on display this year proves once again that Toledo is home to some of the country’s best and brightest advertising and marketing talent. AAF Toledo believes it is important to honor and recognize our members through the ADDY Awards as we aim to support the attraction and retention of top marketing talent in Toledo. The ADDYs are the advertising industry’s largest and most representative competition, attracting over 40,000 entries every year in local AdClub competitions. The mission of the ADDYs competition is to recognize and reward the creative spirit of excellence in the art of advertising.

Conducted annually by the AAF, the local AdClub phase is the first of a three-tier, national competition. Concurrently, all across the country, local entrants vie to win ADDY Awards – and the recognition as the very best in their markets. At the second tier, local ADDY winners compete against winners from other local clubs in one of 15 district competitions. District ADDY winners are then forwarded to the third tier, the national stage of the ADDY Awards. Entry in your local AdClub competition is the first step toward winning a national ADDY. Entering the ADDYs supports the entire advertising industry because the AAF and its local and district affiliates use the proceeds to enhance advertising through programs such as public service, internships, advocacy groups, advertising education, and consumer awareness. Selection of the most creative entry is affected by a scoring process in which a panel of judges evaluates all creative dimensions of every entry. A GOLD ADDY is recognition of the highest level of creative excellence and is judged to be superior to all other entries. Entries that are also considered outstanding and worthy of recognition receive a SILVER or BRONZE ADDY. The number of awards given is determined by the judges based on the relative quality of work in every category. We would like to thank everyone who entered this year’s ADDY Awards, as well as our generous sponsors and volunteers who made this celebration possible. To learn more about AAF Toledo or to get more involved, visit aaftoledo.org or call 419-866-4199.

A LETTER FROM THE PRESIDENT

The American Advertising Federation’s Silver Medal Award Program was established in 1959 to recognize men and women who have made outstanding contributions to advertising and who have been active in furthering the industry’s standards, creative excellence and responsibility in areas of social concern. Annually, AAF member clubs bestow this honor upon outstanding members of the local advertising community.   For many local clubs, awarding the AAF Silver Medal is the highlight of their year. It enhances the image of advertising by recognizing a locally well-known person for their advertising and community involvement.  Candidates are nominated by AAF Toledo members and the recipient is selected by a panel of judges (three previous winners).

CRITERIA CONTRIBUTION TO HIS / HER COMPANY

The recipient must have achieved success in one of the following areas of work: advertising agency, advertiser, media or advertising service. CREATIVE ABILITY

The recipient must have shown a consistent, high degree of original thinking in their field. CONTRIBUTIONS TO THE GENERAL ADVANCEMENT OF ADVERTISING

The recipient must have worked to increase the stature and raise the standards of the advertising profession. CONTRIBUTIONS TO THE COMMUNITY

The recipient should be someone who has been active in civic, religious, or other groups dedicated to human or social welfare.

STEVE HANSON Steve Hanson is a digital marketing pioneer and a video visionary. When he established Hanson Productions in 1991, the firm was specializing in film and video production. In 1996, he renamed the company Hanson Inc., as Internet use was in its infancy. As online commercialization took root, Steve saw the unlimited potential of interactive marketing for his clients. Under Steve’s guidance, the interactive group joined Hanson’s expert video and live production staff to create a formidable, full-service digital agency. Steve began his career as a photojournalist. While working for a regional newspaper, he took on additional freelance work that was published by United Press International, the Associated Press, Time, Newsweek and Sports Illustrated. Steve further honed his communication skills as Assistant Director of Public Relations for BGSU, as the university photographer. From public relations, Steve segued into advertising and sales promotion as a producer for film, video and multimedia presentations at Stephenson & Taylor, before becoming one of the founding partners of Packo, Mitchell, Hanson, & Comer. Steve’s other creative passions beyond the agency are rooted in story telling and cinema. In 2009, he led a group that secured the film rights to “The Prophet” by Kahlil Gibran, one of the bestselling books of the 20th century. The animated film previewed at the Cannes Film Festival and later premiered at The 2014 Toronto International Film Festival. An overarching priority for Steve has always been the nurturing and strengthening of client partnerships. He oversees Hanson’s executive management team and directs the company’s long-range vision. “My job is to make sure our clients get the very best of what we have to offer, which is a lot,” Steve says. “I help them look beyond their day-today business to figure out what market conditions can impact them the most. We then determine which new technologies can positively impact their bottom line. This approach, I believe, has helped us forge immensely successful and rewarding client relationships and made Hanson a significant presence in our field.” Throughout his career, Steve has made generous contributions of time, money and/or professional services to a varied list of regional community organizations, including: The Toledo Fire Department, The Ability Center, The Sight Center, BGSU, TEDxBGSU, The Toledo Museum of Art, SunBridge Academy, and The ProMedica Foundation as a Mission Partner.

Peter Roth has over 17 years of professional ad agency experience. He has developed award winning ad campaigns, interface designs, web sites, event graphics, corporate identity systems, and other print/multimedia materials for leading fortune 500 companies. GlaxoSmithKline, Johnson & Johnson, Pfizer, Boeing, Xerox, Sallie Mae, Sherwin-Williams, and Cub Cadet are among the many clients Peter has worked with. As a strategic creative, Peter strives to push every medium by creating honest, unique work that has a purpose.

With over 10 years of design experience, Tsvetana Rousseva has worked in a variety of creative industries and design disciplines ranging from print, web, photography and most recently social media. A Wayne State University Graphic Design graduate, Tsvetana has specialized on print/marketing campaigns and photo enhancements with clients including Beaumont Hospitals, General Motors and Chrysler. In addition to print design, Tsvetana has thorough experience in web design, content management systems and electronic campaigns for clients ranging in size of emerging musicians to powerhouse automotive companies. In most recent years, she has switched gears to designing for social media by fully embracing the possibilities of what social media platforms can offer and how designs can be viewed and absorbed by the social media savvy viewer.

Mark Zapico is Associate Professor and Chair of the Advertising Department at the College for Creative Studies. Professor Zapico is constantly seeking out new methods of teaching and inspiring the next generation of advertising creative professionals. In addition to pushing for excellence in traditional media, his focus is on moving the department curriculum ahead of the curve in digital advertising, social media, video, content creation and consumer engagement. In his professional career as creative director and art director in Detroit, he created campaigns for clients such as General Motors, Pontiac, Cadillac, Mr. Goodwrench, FTD, American Plastics Council, AAA, Dow Chemical Company, Pulte Homes, Detroit Lions, Harvey’s Bristol Cream, Ford, Lincoln-Mercury, Exxon, Warner-Lambert, Saginaw Spirit Hockey Club, PGA of America, and Tom’s Oyster Bar Restaurants. He directed awardwinning commercials for Meals on Wheels and the National Center for Missing and Exploited Children. His commercials have been seen on the Super Bowl and recognized internationally. He also works as a creative consultant and product designer. He is also self-taught painter. His work has been exhibited in numerous exhibitions and competitions and is held in many private and public collections including the Henry Ford Hospital Healing Arts Center in Detroit. Zapico’s debut solo exhibition was held at the Detroit Reparatory Theater in 2011. His work has been exhibited in CCS Alumni and Faculty exhibitions, the Detroit Wine Auction, Noel Night, the Grosse Pointe Center for the Arts, Art Works Detroit, Art for God’s Sake, WYZ Bar at Aloft Hotel in Detroit and the Detroit Artists Market. His most recent exhibition “TEXTRS” was held in the CCS Alumni and Faculty Hall in November/December 2016.

"REALLY ENJOYED THE BOLD COLORFUL GRAPHICS. I LIKED HOW THEY TOOK AN OLD IDENTIFIABLE GRAPHIC (SMPTE COLOR BARS) AND MADE IT FEEL FRESH. IT WAS NICE TO SEE ALL OF THIS TIED TOGETHER BASED OFF OF THE SMPTE COLOR BARS AS WELL; FROM THE TIMELINE DESIGNS TO THE FUN T-SHIRT DESIGNS. YOU COULD TELL THERE WAS A LOT OF THOUGHT AND CREATIVE PROCESS INVOLVED WITHIN THIS PROJECT.”

I APPROVE THIS MESSAGE EXHIBITION

ENTRANT: THE TOLEDO MUSEUM OF ART

CLIENT: THE TOLEDO MUSEUM OF ART

“I HAD CHILLS WHILE WATCHING IT. MADE SUCH AN IMPACT DESPITE HAVING NO VOICEOVER AND ONLY A FEW LINES OF STATEMENTS. PERFECTLY EXECUTED SOUND EFFECTS THAT MAKE THE VIEWER FULLY ENGAGED IN THE MESSAGE. IMPECCABLY CAPTURED THE TONE AND SERIOUSNESS OF THE SUBJECT MATTER.” TSVETANA ROUSSEVA SENIOR ART DIRECTOR FLEISHMANHILLARD

"WELL EXECUTED VIDEO WITH DYNAMIC SPECIAL EFFECTS. CAPTIVATING STORYLINE DEVELOPED WITHIN THE VIDEO. I LIKED HOW IT HAD A SERIOUS TONE TO IT BUT ALSO INCORPORATED SOME FUNNY MOMENTS (ELEVATOR SCENE/MAN OPENING DOOR THAT HOCKEY PLAYER RUNS INTO).” PETER ROTH ASSOCIATE CREATIVE DIRECTOR GO2 ADVERTISING

DEBBRA COOPER THE UNIVERSITY OF TOLEDO

OFFICERS & BOARD OF GOVERNORS

THANK YOU TO THE FOLLOWING

THE UNIVERSITY OF TOLEDO 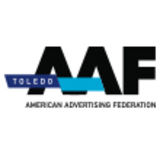