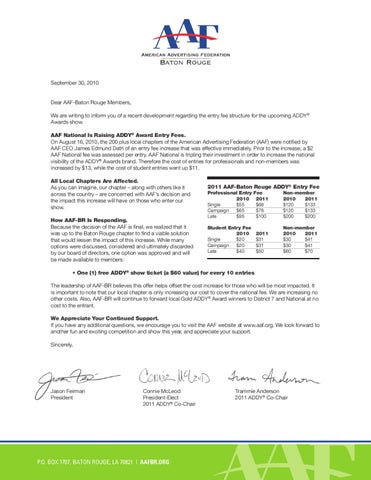 September 30, 2010 Dear AAF-Baton Rouge Members, We are writing to inform you of a recent development regarding the entry fee structure for the upcoming ADDY® Awards show. AAF National Is Raising ADDY® Award Entry Fees. On August 16, 2010, the 200 plus local chapters of the American Advertising Federation (AAF) were notified by AAF CEO James Edmund Datri of an entry fee increase that was effective immediately. Prior to the increase, a $2 AAF National fee was assessed per entry. AAF National is tripling their investment in order to increase the national visibility of the ADDY® Awards brand. Therefore the cost of entries for professionals and non-members was increased by $13, while the cost of student entries went up $11. All Local Chapters Are Affected. As you can imagine, our chapter – along with others like it across the country – are concerned with AAF’s decision and the impact this increase will have on those who enter our show. How AAF-BR Is Responding. Because the decision of the AAF is final, we realized that it was up to the Baton Rouge chapter to find a viable solution that would lessen the impact of this increase. While many options were discussed, considered and ultimately discarded by our board of directors, one option was approved and will be made available to members:

The leadership of AAF-BR believes this offer helps offset the cost increase for those who will be most impacted. It is important to note that our local chapter is only increasing our cost to cover the national fee. We are increasing no other costs. Also, AAF-BR will continue to forward local Gold ADDY® Award winners to District 7 and National at no cost to the entrant. We Appreciate Your Continued Support. If you have any additional questions, we encourage you to visit the AAF website at www.aaf.org. We look forward to another fun and exciting competition and show this year, and appreciate your support. Sincerely, 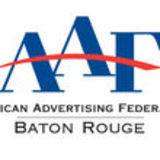 A letter on behalf of the Board of Directors of AAF-Baton Rouge, ADDY Committee.

A letter on behalf of the Board of Directors of AAF-Baton Rouge, ADDY Committee.