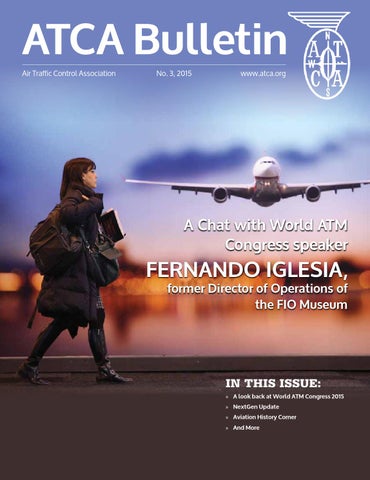 former Director of Operations of the FIO Museum

am writing this after returning from the third edition of World ATM Congress (WATMC) in Madrid, Spain. I wrote briefly last month describing ATCA’s role in WATMC. The event was once again very successful, with 6,929 registered attendees. However, I won’t go into all of the numbers here. Instead, I would like to focus on what value this event contributes to ATCA and, in turn, your membership. When I first came to ATCA, the Board of Directors was resolute that ATCA increase its span of influence to the international community, both in terms of membership and participation. WATMC has indeed helped us do this. ATCA now has members from all around the world and we are often asked to participate in international events. Our relationships with CANSO, IATA, IFATCA, and other international organizations have never been stronger. This international presence is beneficial to you and your membership in that it expands and strengthens your ability to connect with fellow members and international organizations. This is good for pro-

fessional as well as business development. For example, in the coming weeks ATCA will participate in the annual IATA Operations Conference and the IFATCA Annual Conference. We will be sure to pass on useful information from both of these conferences to you, the member. You will notice in this issue an article on the launch of the FAA’s new NextGen Update 2015 website, faa.gov/nextgen/ update/. In the coming weeks, as we update our Association Management System and our ATCA website, you will see a greater access to information, including links to websites such as the new NextGen Update 2015. Even though the memory of World ATM Congress hasn’t faded, ATCA is already moving forward. The ATCA Technical Symposium in Atlantic City, NJ, is right around the corner. I look forward to seeing you there. As I have said many times we strive for continuous improvement. To this end I welcome any feedback you may have to help make your association more valuable, beneficial, and useful to our members.

Formed in 1956 as a non-profit, professional membership association, ATCA represents the interests of all professionals in the air traffic control industry. Dedicated to the advancement of professionalism and technology of air traffic control, ATCA has grown to represent several thousand individuals and organizations managing and providing ATC services and equipment around the world. Published by

© 2015 Air Traffic Control Association, Inc. All rights reserved. The contents of this publication may not be reproduced by any means, in whole or in part, without the prior written consent of ATCA. Disclaimer: The opinions expressed by the authors of the editorial articles contained in this publication are those of the respective authors and do not necessarily represent the opinion of ATCA. Printed in Canada. Please recycle where facilities exist. Cover photo courtesy of Kristen Knott

“In those times of bad weather, having a good controller is a do or die situation. They are part of the history.” - Fernando Iglesias

hat binds everyone together at ATCA is a shared love of aviation. Fernando Iglesias is a complete embodiment of that sentiment. Iglesias, the Infante de Orleans Foundation (FIO) director of operations from 2000-2010, was a guest speaker at World ATM Congress (WATMC) in Madrid, Spain, on March 12. He introduced Carlos Valle, president of FIO, and delivered a short presentation on the FIO Museum – which exhibited at WATMC all three days – before a viewing of the aviation documentary, Wings for History: The Rescue of a Myth. Officially established in December 1989, with origins dating back to 1984, the not-for-profit FIO Museum came

Fernando Iglesias and his wife.

to fruition when members of the Aresti Aerobatic Club in Madrid decided to form their own collection of historic aircraft in flight. “My job [at the FIO museum] was to distribute all the flights. It was not an easy task because we had many types of planes and pilots. There are no two airplanes that fly in the same manner; pilots must be able to troubleshoot,” said Iglesias. He adds that the FIO pilots mainly come from the Spanish Aeromatic Team and the Spanish Air Force but the museum is always trying to get younger pilots involved. Today, the FIO’s collection includes 43 historic aircraft, ranging from 1925 to 1970. Of these 43 aircraft, Iglesias – who first started flying at the age of 16 – has

flown 24 of them. His favorites are the Boeing Stearman Kaydet-FNM (1933) and the Bucker Bu 131 Jungmann-ERO (1934). These aircraft bring especially happy memories because he flew with both of his daughters in them. Iglesias acknowledges that the Comper CLA 7 Swift, the aircraft that was displayed at the back of the World ATM Exhibition, is a much more difficult plane to fly due to its poor visibility. Fernando Rein Loring (1902 – 1978) famously flew the aircraft from Madrid, Spain, to Manila, Phillipines, in 1933 with a “Visit Spain” advertisement scrawled across its body. Iglesias is also quick to add that air traffic controllers are a crucial aspect of the aviation industry. In his aviation career,

he’s flown more than 5,000 ground control approaches, with 10-15 percent of those in poor weather conditions. “In those times of bad weather, having a good controller is a do or die situation. They are part of the history,” said Iglesias. ATCA and World ATM Congress was proud to exhibit the FIO Museum – the only museum of its kind in Spain – and learn about a living legend’s career and passion for aviation. “The most important part of this [FIO Museum] collection is to maintain the aeronautical heritage and history of aviation,” says Iglesias. “The goal is not to present an air show but to show the beauty of these pieces of art with this collection.”

The Comper CLA 7 Swift aircraft was on display at the FIO Museum stand at the World ATM Exhibition.

ew videos featuring the FAA’s top two NextGen executives lead the recently published NextGen Update: 2015 (http://www.faa.gov/nextgen/update/), which puts the latest on airspace modernization in one easy-tonavigate website. Chief NextGen Officer Michael G. Whitaker and Assistant Administrator for NextGen Edward L. Bolton Jr. discuss NextGen progress, plans, and benefits. “NextGen is not just about the work that we’re doing in the next one to three years,” Bolton said in his video. “NextGen is now.” “NextGen changes how we communicate beyond voice, navigate beyond radio beacons, and track aircraft beyond radar,” Whitaker said.

The Progress and Plans section includes the latest on many programs of interest to ATCA members. By clicking on sidebars, links, and videos, visitors can drill down to a great deal of information. On the Automatic Dependent Surveillance-Broadcast (ADS-B) page you’ll find connections to: • the final rule mandating ADS-B equipage by January 1, 2020 • a sidebar about Equip 2020, the FAA’s initiative to resolve equipage issues with the airlines and general aviation • NextGen Performance Snapshot success stories about ADS-B • a video of Joe Bertapelle, JetBlue’s director of Strategic Airspace Programs, explaining how NextGen helps his airline

The Operator Investments and Airports section provides an overview of existing and planned capabilities, the benefits these capabilities enable, and which technologies and equipment are needed to take advantage of specific NextGen capabilities. The Collaboration section shows progress on three-year priorities agreed to by the FAA and the NextGen Advisory Committee on Performance Based Navigation, Surface Operations, Multiple Runway Operations, and Data Communications. The Update also includes a roundup of achievements during the first decade of NextGen development.

Midwest Air Traffic Control Service, Inc., is a leading provider of aviation support services to US civilian and military federal government agencies, as well as international customers. Founded in 1978, Midwest ATC supports a diverse customer base, including the US Federal Aviation Administration, the FAA International Office, the US Department of Defense, the North Atlantic Treaty organization, and the Canadian Department of Defense. With our solid reputation and team of highly qualified aviation experts, Midwest ATC is dedicated to providing clients with an outstanding level of service and commitment to safety at a reasonable price. Midwest takes seriously our role in ensuring the safety of the traveling public and in supporting the efforts of both the US government and global partners overseas. Using Midwest ATC&#39;s flexible and professional approach will enable you to achieve the success you seek.

A Look Back at

Aviation History Corner The United States and the Netherlands signed a new international aviation agreement, based on the principle of free competition and regarded as a model for similar understandings that the United States hoped to negotiate. On March 17, the United States also announced a new agreement with the United Kingdom, within the context of the Bermuda II treaty, making possible a range of lower fares between the two nations. During 1978, the United States concluded liberal new aviation agreements with Israel and several other nations. In an August 21 statement explaining its negotiating stance, the Carter Administration declared that “maximum consumer benefits can be best achieved through the preservation and extension of competition between airlines in a fair market place.” - FAA Historical Chronology

CACI is a leading provider of a wide range of aviation and aerospace oﬀerings, with core competencies in: Enterprise training Advanced simulation ■ Remote and classroom education With experience managing and delivering training services to over 40 government organizations in the United States and around the world, CACI assures the FAA of high-quality, cost-eﬃcient solutions that produce results. ■ ■

Transforming the air trafﬁc management (ATM) system is essential for improving safety, efﬁciency and the environment around the globe. Boeing is fully committed and uniquely qualiﬁed to help make ATM transformation a reality. It’s the right time and Boeing is the right partner. 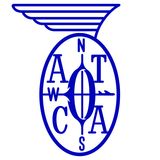