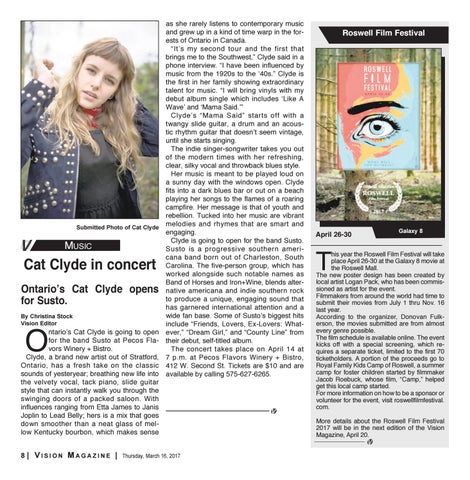 as she rarely listens to contemporary music and grew up in a kind of time warp in the forests of Ontario in Canada. “It’s my second tour and the first that brings me to the Southwest,” Clyde said in a phone interview. “I have been influenced by music from the 1920s to the ‘40s.” Clyde is the first in her family showing extraordinary talent for music. “I will bring vinyls with my debut album single which includes ‘Like A Wave’ and ‘Mama Said.’” Clyde’s “Mama Said” starts off with a twangy slide guitar, a drum and an acoustic rhythm guitar that doesn’t seem vintage, until she starts singing. The indie singer-songwriter takes you out of the modern times with her refreshing, clear, silky vocal and throwback blues style. Her music is meant to be played loud on a sunny day with the windows open. Clyde fits into a dark blues bar or out on a beach playing her songs to the flames of a roaring campfire. Her message is that of youth and rebellion. Tucked into her music are vibrant melodies and rhymes that are smart and Submitted Photo of Cat Clyde engaging. Clyde is going to open for the band Susto. Music Susto is a progressive southern americana band born out of Charleston, South Carolina. The five-person group, which has worked alongside such notable names as Band of Horses and Iron+Wine, blends alterOntario’s Cat Clyde opens native americana and indie southern rock to produce a unique, engaging sound that for Susto. has garnered international attention and a wide fan base. Some of Susto’s biggest hits By Christina Stock Vision Editor include “Friends, Lovers, Ex-Lovers: Whatntario’s Cat Clyde is going to open ever,” “Dream Girl,” and “County Line” from for the band Susto at Pecos Fla- their debut, self-titled album. vors Winery + Bistro. The concert takes place on April 14 at Clyde, a brand new artist out of Stratford, 7 p.m. at Pecos Flavors Winery + Bistro, Ontario, has a fresh take on the classic 412 W. Second St. Tickets are $10 and are sounds of yesteryear; breathing new life into available by calling 575-627-6265. the velvety vocal, tack piano, slide guitar style that can instantly walk you through the swinging doors of a packed saloon. With influences ranging from Etta James to Janis Joplin to Lead Belly; hers is a mix that goes down smoother than a neat glass of mellow Kentucky bourbon, which makes sense

his year the Roswell Film Festival will take place April 26-30 at the Galaxy 8 movie at the Roswell Mall. The new poster design has been created by local artist Logan Pack, who has been commissioned as artist for the event. Filmmakers from around the world had time to submit their movies from July 1 thru Nov. 16 last year. According to the organizer, Donovan Fulkerson, the movies submitted are from almost every genre possible. The film schedule is available online. The event kicks off with a special screening, which requires a separate ticket, limited to the first 70 ticketholders. A portion of the proceeds go to Royal Family Kids Camp of Roswell, a summer camp for foster children started by filmmaker Jacob Roebuck, whose film, “Camp,” helped get this local camp started. For more information on how to be a sponsor or volunteer for the event, visit roswellfilmfestival. com. More details about the Roswell Film Festival 2017 will be in the next edition of the Vision Magazine, April 20. 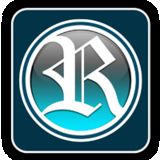 The Vision Magazine covers events in Roswell, New Mexico and surrounding area. On the cover: Roswell's theater season is here with 'The Good...

The Vision Magazine covers events in Roswell, New Mexico and surrounding area. On the cover: Roswell's theater season is here with 'The Good...