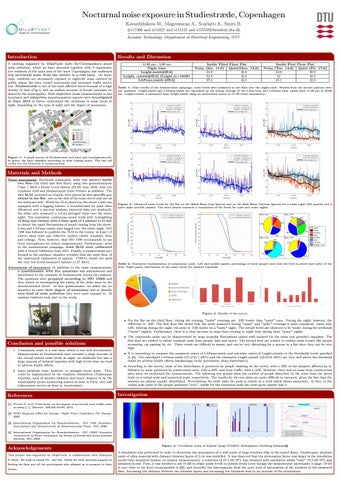 Introduction A meeting organised by MiljøPunkt Indre By-Christianshavn about noise pollution, which we have attended together with 9 representative residents of the main area of the inner Copenhagen, has confirmed that nocturnal noise from the streets is a real issue. On weekends, residents are incessantly exposed to night-life noise emitted by public places like bars, crowd movements and increased traffic activities. Studiestræde is one of the most affected street because of a high density of bars (Fig.1) and an endless increase of license premises released by the municipality. Both objective (noise measurements in two locations) and subjective (questionnaires) aspects were investigated in June 2016 to better understand the variations in noise levels at night, depending on the type of night and the degree of annoyance.

Table 1: Main results of the measurement campaign: noise levels were measured in two flats over two nights each. Results from the second position were not analysed. Lnight,inside and LAFmax,inside are calculated as the energy average of the LAeq,1min and LAFmax,1min values from 11:00 pm to 05:00 am. Lnight,outside is estimated from Lnight,inside using an attenuation factor of 19 dB (from simulation).

Figure 1: A small section of Studiestræde (red line) and Larsbjørnstræde. In green, the bars classified according to their closing hours. The two red circles are the locations of measurements.

Materials and Methods Noise assessment Nocturnal community noise was assessed inside two flats (on third and first floor) using two general-purpose Class 1 B&amp;K’s Sound Level Meters (SLM) type 2250, with microphone 4189 and Measurement Suite Partner as software. The two SLM, mounted on tripods, were placed in two specific positions in the flat: one on the side of the noisy street and one on the backyard side. While the SLM placed on the street’s side was equipped with a logging feature, a recorder(used for peak identification) and a spectral analyser (spectral data not analysed), the other only measured a LA,eq averaged value over the entire night. The equivalent, continuous sound levels with A-weighting (LAeq) was chosen with a time span of 1 minute to be able to detect the rapid fluctuations of sound coming from the street. LAeq and LAFmax values were logged over the entire night. ISO 1996 was followed to position the SLM in the rooms: at least 1.5 meters away from any reflective surface (walls, windows, floor and ceiling). Note, however, that ISO 1996 recommends to use three microphones for indoor measurements. Furthermore, prior to the measurement campaign, both SLM were calibrated with a Sound Calibrator type 4231. Finally, a measurement performed in the anechoic chamber revealed that the noise floor of the instrument (measured at approx. 17dBA) would not spoil the very low levels measured indoors (&gt;27 dBA). Assessment of annoyance In addition to the noise measurements, a questionnaire with five questions was administered and distributed to the residents of Studiestræde during two sessions. The questions were prepared according to ISO 15666 and they aimed at investigating the sweep of the noise issue in the aforementioned street. In this questionnaire, we asked the responders to rate their degree of annoyance and to identify what kind of noise pollution they were most exposed to. 23 random residents took part in the study.

Figure 2: Measured noise levels for the flat on the third floor (top figures) and on the first floor (bottom figures) for a noisy night (left panels) and a quiet night (middle panels). The third panels represent a comparison of the levels for quiet and noisy nights.

Table 2: Statistical representation of community noise. Left and middle panels, percentage of total sample time that the level is above each value of the level. Right panel, distribution of the noise events (or isolated impulses).

Figure 3: Results of the survey.

Conclusion and possible solutions 1. Community noise is a real issue which is not well documented. Measurements at Studiestræde have revealed a large increase of the overall indoor noise levels at night, on weekends but also a large amount of isolated impulses with high levels that can lead to adverse health effects. 2. Some solutions exist, however, to mitigate street noise. They could be implemented by the residents themselves (Triple-pane windows, used of wooden shutters and heavy drapes) or by the municipality (noise monitoring system as done in Paris, very soft enforcement service as done in Amsterdam).

• The community noise can be characterized by large irregular fluctuations mixed with isolated (in the sense non periodic) impulses. The first kind are related to rather constant noise from people, bars and music. The second kind are related to sudden noise events, like people screaming, car passing by, etc. These events are difficult to assess, and can be very disturbing for a person in a flat since they can be very high. • It is interesting to compare the measured values of LAFmax,inside and calculate values of Lnight,outside to the thresholds levels specified in [2]. The calculated LAFmax,inside (47.4/45.1 dBA) and the estimated Lnight,outside (52.9/52 dBA) are very well above the threshold limits for adverse health effects (awakenings, body movements, sleep disturbance). • According to the survey, most of the disturbance is produced by people chatting on the street, with a 39% of the subjects affected by it, followed by noise produced by construction sites, with a 26%, and from traffic, with a 16%. However, there was no noise from construction sites when we performed the measurements. The following two graphs show the number of people disturbed by the noise from the street both on a verbal scale and numerical scale, respectively. The results for the two plots are quite difficult to interpret, given the fact that the answers are almost equally distributed. Nevertheless, for both plots the peak is clearly at a level which shows annoyance. In fact, in the verbal scale most of the people answered &quot;very&quot;, whilst for the numerical scale the most given answer was 8.

Acknowledgements This project was supported by MiljøPunkt in collaboration with Marianne S. Bech. We wish to thank Mr. and Ms. Vesely for their precious support in finding the flats and all the participants who allowed us to measure in their homes.

A simulation was performed in order to determine the attenuation of a wall made of large windows (like in the tested flats). Double-pane windows made of silica material with distance between layers of 3 cm was modelled. It was observed that the attenuation factor was larger in the simulation model than measured (indoor vs outdoor measurement): a reduction of 27.2 dB SPL was obtained with simulation whilst &quot;only&quot; 19.2 dB SPL was obtained in real. First, it was decided to use 19 dB to relate inside levels to outside levels (even though the measurement uncertainty is large, 19 dB is very close to the level recommended in [2]), and secondly, the discrepancies show the poor level of attenuation of the windows in the measured flats. Increasing the distance between the windows layers and increasing the thickness lead to an increase of the attenuation. 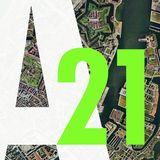