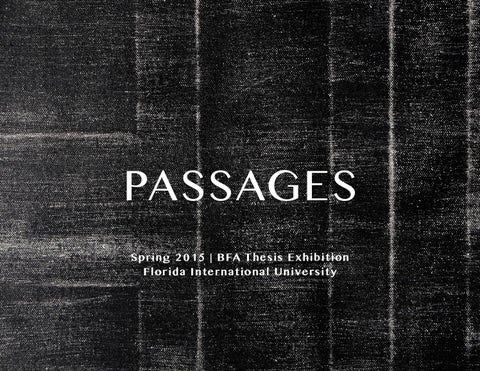 Plastics. This is the “great future” offered to Benjamin Braddock by Mr. McGuire in the iconic 1967 film, The Graduate. It is a future of progress and prosperity, where routes to success are clearly mapped. It is not a future for drifters, or those who nurse uncertainty. Yet, this is precisely what an artist must do. An artist can take nothing for granted, must have intense curiosity, and ask difficult questions. Challenging conventional thinking, especially in oneself, is a necessity. It is the artist’s task to remain exposed; a raw nerve open to life’s best and worst, its pain and brutality, its paradoxes and perplexity, its immense beauty and everyday magic. In the midst of Benjamin’s post-college existential malaise, his father asks him what he wants from his future. When I consider the rising artists featured in this exhibition, Benjamin’s response still rings true nearly fifty years later: “I want it to be . . . different.” Dustin London Instructor, BFA Thesis II April 2015 Passages

Paola Katherine Rodriguez As a survivor of abuse, I now realize that an important thing that was taken away from me during that time was my voice. In my series, Broken Free, I try to promote awareness of victimization, while empowering survivors to speak out. Fellow survivors and I share our personal experiences with one another as I photograph them, their intimate space, and anything pertaining to their particular experience. They then have the option to voice themselves through writing on the prints. The combination of handwriting and image juxtaposes the survivorâ&amp;#x20AC;&amp;#x2122;s past with their present. While an image can often speak for itself, I am interested in the textâ&amp;#x20AC;&amp;#x2122;s ability to become like a diary entry, allowing for intimacy, openness, and vulnerability, providing insight as to where each person stands in their healing process. artbypaopao.com

Vanessa Valdes Exposing myself to new processes entices me to explore new ways to manipulate geometric forms in a variety of mediums. These forms are seemingly simple, yet the process by which they are created is dynamic and physically laborious. Each piece takes on its own life as it is torn apart, battered, coddled, and shined into something new, becoming a monument to time and transformation.

Aura Lacruz My work is a narrative of my struggles and experiences concerning my body weight. I often felt the extreme pressure to conform and fit into a box. Thin was everything to me, and if I couldn’t be that, what was I? I still hear their voices: “Why can’t I look like so and so? Why can’t you try harder, you could be so beautiful if you were thin.” Those words are hard to forget or ignore. So I became obsessed with the weight scale, numbers, often weighing myself endlessly during the day. I avoided looking at mirrors because I couldn’t stand to look at myself, disgusted at what I saw. My work in ceramics consists of large, juicy, rough, and imperfect vessels. A vessel can be filled or emptied; it can protect or restrict. It is the interior and exterior, and like one that holds liquids and solids, to me the vessel is a container for my own self-doubt, feelings that I’ve held inside and repressed. In these pieces I embrace and magnify every dent, scratch, and roll of my body, putting these “flaws” on full display.

Carlos Spartacus If I see the leaves of a tree dancing in the wind, I make a mark in reaction to their movement. If I touch the blades of grass beneath me, or hear the distant mumbling of a conversation, I translate these sensory experiences intoÂ marksÂ on a surface. In a world filled with infinite distractions, I aspire to remain in a state of present-mindedness, where my responses are determined by the intensity of felt sensations. The purring sounds of a cat can become fine lines of rhythmic stippling, whereas the blast of a bus driving by can materialize as a saturated brushstroke. Some works are on paper, while others are made directly on the wall. These pieces exist for a short time and are then destroyed in an embrace of the transient and impermanent nature of life itself. carlospartacus.com

Martha Carolina Guerrero My embroidery is part of a maternal legacy that glorifies the labor of women. I grew up among fabrics, threads, and woman that were heads of households. I learned about embroidery in our family-run handkerchief factory during the 80â&amp;#x20AC;&amp;#x2122;s and 90â&amp;#x20AC;&amp;#x2122;s, the worst and most violent decades in Colombian history. During my childhood, both of my parents also did pyrography, which has been an important part of my connection with these materials. In my current work using similar processes, I let marks spontaneously appear from my subconscious, exposing my deepest memories and past experiences. I consider my work an act of freedom and protest. In my work with horses, I am looking to recognize everyone who has to deal with life under difficult social circumstances. I also use the mule as a symbol for the working people of my country who, thanks to their strength and endurance, overcame a long period of violence. By dedicating their lives to the cultivation of a variety of important crops they have formed an industry that has helped the country avoid the recultivation of cocaine to this day.

Jeannie Chatmonmart Like a navigator, I am plotting my position at each given point over the course of time. Like a cartographer, I am organizing and mapping out the tangled web of my thoughts. Like a scientist, I am dissecting material and immaterial things in order to better understand them. I am none of these things, nor do I consider myself a writer, a poet, a professional. If anything, I am an explorer, an amateur one even at that. And the path to understanding myself has been one of the most undesirable passages I have ever set out on. I want to put myself in a state of utter vulnerability, to enhance my own self-awareness and to be pulled out of my comfort zone. I want to be read like an open book, all of my secrets and intimate thoughts exposedâ&amp;#x20AC;&amp;#x201D;whether it is to be read by the world or no one at all. While translating my experience into the written word, I am also blurring the lines between writing and mark-making. Words become illegible marks and marks present the illusion of being decipherable. Having always floated between different lands and languages, the action of putting pen to paper has become the way of grounding myself to one particular place at one distinct moment in time.

Darryl Wawa There is a very fun surprise that happens when I carefully look through the viewfinder or at my images; I notice things, things I would normally not pay attention to, like the step of a dog’s paw on the concrete floor, as he presses onward, that moment his paw hits the floor, in a melting embrace that lets you know he feels the ground or the laptop blasting light on my girlfriend’s oily, frustrated, face as she sits on a messy table, how her fingers sank on the skin of her cheek like it was quick sand, or how the older woman with the creepy smile that pushed her breasts towards the camera as her granddaughter looked away and her friends smiled at the camera so vacantly in front of one of those typical, bland Kendall apartment complexes, how her skin, sagging and wrinkly, still had a glow of youth, or how my cat Maurice, when we first moved in our current apartment, jumped on his little tower and looked around at the chaos of bags and trash in this new space, seeming to ask himself, where am I? What is this stuff? Photography allows me to investigate this curiosity for flesh and fur and space and texture and color—bodies and their surroundings. My job is to describe those things. “description, which lingers, and loves for no reason.” --Tony Hoagland 26

Pedro Perez I feel that the processes, pieces, parts, and points of any creative attempt become hidden with the focus being shifted to the contemplation of a final product. This space between the start and the potential finish can be become invisible, just like the electricity powering a fan. One experiences the function of the fan and the air, but forgets the marvel of an electrical current that is allowing it to exist. By revealing the process one can see each point or part as its own current.

Juan Neira I am interested in collapsing the space between the illusionism of painting and the objectness of sculpture. By sanding coats of black paint from a white gessoed surface, a resulting grey tonality reveals the structural support through a process of brute, yet meticulous mark-making. I use the elements that are commonly understood to make up a canvas as tools to create a state of ambiguity; a new reality where seemingly opposing notions can coexist.