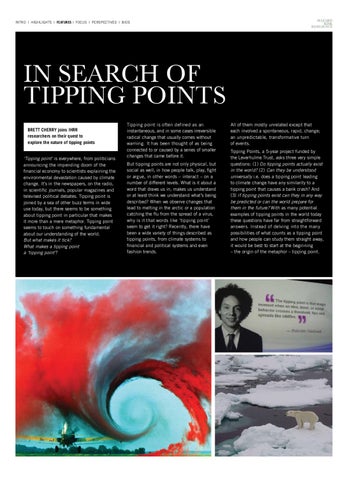 IN SEARCH OF TIPPING POINTS BRETT CHERRY joins IHRR researchers on their quest to explore the nature of tipping points ‘Tipping point’ is everywhere, from politicians announcing the impending doom of the financial economy to scientists explaining the environmental devastation caused by climate change. It’s in the newspapers, on the radio, in scientific journals, popular magazines and televised political debates. Tipping point is joined by a sea of other buzz terms in wide use today, but there seems to be something about tipping point in particular that makes it more than a mere metaphor. Tipping point seems to touch on something fundamental about our understanding of the world. But what makes it tick? What makes a tipping point a ‘tipping point’?

Tipping point is often defined as an instantaneous, and in some cases irreversible radical change that usually comes without warning. It has been thought of as being connected to or caused by a series of smaller changes that came before it. But tipping points are not only physical, but social as well, in how people talk, play, fight or argue, in other words – interact – on a number of different levels. What is it about a word that draws us in, makes us understand or at least think we understand what’s being described? When we observe changes that lead to melting in the arctic or a population catching the flu from the spread of a virus, why is it that words like ‘tipping point’ seem to get it right? Recently, there have been a wide variety of things described as tipping points, from climate systems to financial and political systems and even fashion trends.

All of them mostly unrelated except that each involved a spontaneous, rapid, change; an unpredictable, transformative turn of events. Tipping Points, a 5-year project funded by the Leverhulme Trust, asks three very simple questions: (1) Do tipping points actually exist in the world? (2) Can they be understood universally i.e. does a tipping point leading to climate change have any similarity to a tipping point that causes a bank crash? And (3) if tipping points exist can they in any way be predicted or can the world prepare for them in the future? With as many potential examples of tipping points in the world today these questions have far from straightforward answers. Instead of delving into the many possibilities of what counts as a tipping point and how people can study them straight away, it would be best to start at the beginning – the origin of the metaphor – tipping point.

This is the high-res version of the first issue of IHRR's new magazine. It introduces research projects from the Institute of Hazard, Risk and Resilience at Durham University on tipping points, climate change adaptation, recovering from disasters in developing countries, the Aberfan Disaster, governing emerging science and technologies, defining resilience plus much more.