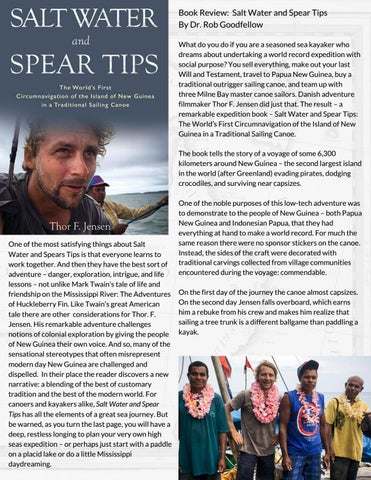 Book Review: Salt Water and Spear Tips By Dr. Rob Goodfellow What do you do if you are a seasoned sea kayaker who dreams about undertaking a world record expedition with social purpose? You sell everything, make out your last Will and Testament, travel to Papua New Guinea, buy a traditional outrigger sailing canoe, and team up with three Milne Bay master canoe sailors. Danish adventure filmmaker Thor F. Jensen did just that. The result – a remarkable expedition book – Salt Water and Spear Tips: The World’s First Circumnavigation of the Island of New Guinea in a Traditional Sailing Canoe. The book tells the story of a voyage of some 6,300 kilometers around New Guinea – the second largest island in the world (after Greenland) evading pirates, dodging crocodiles, and surviving near capsizes.

One of the most satisfying things about Salt Water and Spears Tips is that everyone learns to work together. And then they have the best sort of adventure – danger, exploration, intrigue, and life lessons – not unlike Mark Twain’s tale of life and friendship on the Mississippi River: The Adventures of Huckleberry Fin. Like Twain’s great American tale there are other considerations for Thor. F. Jensen. His remarkable adventure challenges notions of colonial exploration by giving the people of New Guinea their own voice. And so, many of the sensational stereotypes that often misrepresent modern day New Guinea are challenged and dispelled. In their place the reader discovers a new narrative: a blending of the best of customary tradition and the best of the modern world. For canoers and kayakers alike, Salt Water and Spear Tips has all the elements of a great sea journey. But be warned, as you turn the last page, you will have a deep, restless longing to plan your very own high seas expedition – or perhaps just start with a paddle on a placid lake or do a little Mississippi daydreaming.

One of the noble purposes of this low-tech adventure was to demonstrate to the people of New Guinea – both Papua New Guinea and Indonesian Papua, that they had everything at hand to make a world record. For much the same reason there were no sponsor stickers on the canoe. Instead, the sides of the craft were decorated with traditional carvings collected from village communities encountered during the voyage: commendable. On the first day of the journey the canoe almost capsizes. On the second day Jensen falls overboard, which earns him a rebuke from his crew and makes him realize that sailing a tree trunk is a different ballgame than paddling a kayak. 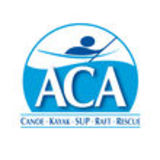