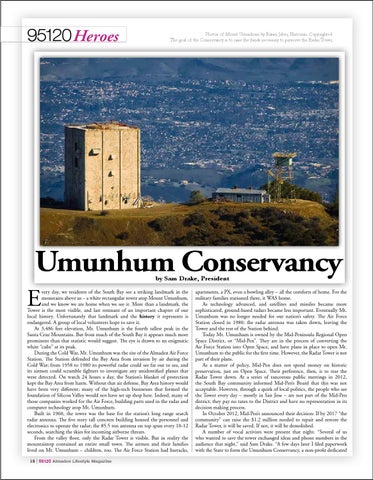 Photos of Mount Umunhum by Basim Jaber, Historian. Copyrighted. The goal of the Conservancy is to raise the funds necessary to preserve the Radar Tower.

very day, we residents of the South Bay see a striking landmark in the mountains above us – a white rectangular tower atop Mount Umunhum, and we know we are home when we see it. More than a landmark, the Tower is the most visible, and last remnant of an important chapter of our local history. Unfortunately that landmark and the history it represents is endangered. A group of local volunteers hope to save it. At 3,486 feet elevation, Mt. Umunhum is the fourth tallest peak in the Santa Cruz Mountains. But from much of the South Bay it appears much more prominent than that statistic would suggest. The eye is drawn to an enigmatic white “cube” at its peak. During the Cold War, Mt. Umunhum was the site of the Almaden Air Force Station. The Station defended the Bay Area from invasion by air during the Cold War; from 1958 to 1980 its powerful radar could see far out to sea, and its airmen could scramble fighters to investigate any unidentified planes that were detected. On watch 24 hours a day, the Station’s blanket of protection kept the Bay Area from harm. Without that air defense, Bay Area history would have been very different; many of the high-tech businesses that formed the foundation of Silicon Valley would not have set up shop here. Indeed, many of those companies worked for the Air Force, building parts used in the radar and computer technology atop Mt. Umunhum. Built in 1960, the tower was the base for the station’s long range search radar antenna. The five story tall concrete building housed the personnel and electronics to operate the radar; the 85.5 ton antenna on top spun every 10-12 seconds, searching the skies for incoming airborne threats. From the valley floor, only the Radar Tower is visible. But in reality the mountaintop contained an entire small town. The airmen and their families lived on Mt. Umunhum – children, too. The Air Force Station had barracks, 18 | 95120 Almaden Lifestyle Magazine

apartments, a PX, even a bowling alley – all the comforts of home. For the military families stationed there, it WAS home. As technology advanced, and satellites and missiles became more sophisticated, ground-based radars became less important. Eventually Mt. Umunhum was no longer needed for our nation’s safety. The Air Force Station closed in 1980; the radar antenna was taken down, leaving the Tower and the rest of the Station behind. Today Mt. Umunhum is owned by the Mid-Peninsula Regional Open Space District, or “Mid-Pen”. They are in the process of converting the Air Force Station into Open Space, and have plans in place to open Mt. Umunhum to the public for the first time. However, the Radar Tower is not part of their plans. As a matter of policy, Mid-Pen does not spend money on historic preservation, just on Open Space. Their preference, then, is to tear the Radar Tower down. At a series of rancorous public meetings in 2012, the South Bay community informed Mid-Pen’s Board that this was not acceptable. However, through a quirk of local politics, the people who see the Tower every day – mostly in San Jose – are not part of the Mid-Pen district; they pay no taxes to the District and have no representation in its decision making process. In October 2012, Mid-Pen’s announced their decision: If by 2017 “the community” can raise the $1.2 million needed to repair and restore the Radar Tower, it will be saved. If not, it will be demolished. A number of vocal activists were present that night. “Several of us who wanted to save the tower exchanged ideas and phone numbers in the audience that night,” said Sam Drake. “A few days later I filed paperwork with the State to form the Umunhum Conservancy, a non-profit dedicated 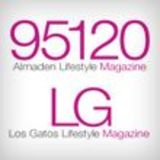