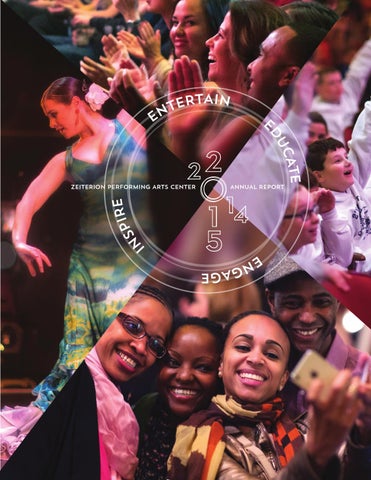 Dear Friends, The Zeiterion’s 2014-2015 season was one of the most memorable yet. It was a year of tremendous growth for our organization, and we are thrilled to share the highlights with you in this report. The stars aligned for us, leading to a spectacular main-stage lineup that included 17 sold out shows - a record breaking number! We dubbed this past year our “Year of the Member,” leading to a remarkable 40% increase in both number of members and revenue. Our ArtsBridge initiative’s continued success was especially apparent this year, with education and community programs surrounding some of our most moving and inspirational productions, such as Black Violin and Simon Wiesenthal: Nazi Hunter. We celebrated the 32nd year of our incredible volunteer usher program, with some volunteers reaching their 30 year anniversary with The Z! In addition to these successes, we are reporting that attendance, ticket sales, and contributed income are on the rise - a trend that we firmly believe will continue. Behind the scenes, we made significant investments in staffing thanks in part to a grant from The Island Foundation focused on capacity building. We filled the position of Development Director that had been vacant for many years, added a Development Coordinator position, and hired a full-time Staff Accountant. With these investments, The Z is on course to grow and thrive towards a healthy, sustainable future. The Z is also thrilled to report that our Board of Trustees nearly doubled in size over the last fiscal year, a sure sign of the positive energy surrounding us. Our relationship with the City of New Bedford is stronger than ever, as we executed a Facility Management Contract which recognized the hard work and expense that goes into maintaining this busy theater. Similarly, in partnership with the city of New Bedford and the state, the first phase of the façade restoration was completed. We are incredibly proud of the progress we made this year and have never been more enthusiastic about the work we are doing. Of course, all of this good news would not be possible without our loyal and generous supporters. You believe in The Z and understand its importance in our community. You are our true stars and we are ever grateful that you continue to align in our direction. Warm regards,

The mission of the Zeiterion Theatre, Inc. (The Z) is to provide New Bedford and the

region with performing arts programming of excellence that INSPIRES, EDUCATES, ENGAGES, and ENTERTAINS.

A good volunteer can be hard to find, but not at The Z! Reliable, loyal, knowledgeable, and passionate, our ushers are a testament to just how much the community cares about the success of The Z. These remarkable individuals are essential to the function of the theatre, enabling The Z to operate efficiently and assisting our full time staff in order to better serve the 80,000 patrons who come through our doors every year. From the simple task of taking your ticket to the moment they wish you well as you leave, the complete Z experience is made possible by this phenomenal group.

66 ushers volunteered during the 2014-2015 season Last year, our ushers collectively worked over 10,000 hours Our ushers are an incredibly diverse group of individuals: retirees, teachers, and business professionals of all ages who love and support The Z tirelessly Our volunteer usher program was established in 1983, making the 14-15 season its 32nd year

YEAR OF THE MEMBER

Members are the stars of The Z. With that in mind, we declared 2014-2015 to be the Year of the Member. An aggressive goal was set to increase membership in both revenue and number of members, and we are thrilled to report the program grew by 40%. As an interesting note, if every Z member attended a performance together, it would be a sold-out show! With a successful membership program already in place, we rolled out some new initiatives to achieve our goals: Pay it Forward: Z Members can now share the love and give the gift of membership. Each member at the $100 level and above are given a free $50 membership to gift to family of friends. The Member Lounge: We literally tore down the walls for our members, connecting the Penler space to the concession area, creating a special place to socialize with friends and fellow members before each show. Members-Only Season Preview Party: As we launched the 2014-2015 season, we also launched this special members-only event to unveil the season to our most important constituency.

One of the longest running strategic programs at The Z, the goal of ArtsBridge is to enrich the education of young people and engage the community through the diverse and inspiring productions we present each year. This strategy brings together The Z’s three main thrusts – mainstage performances, educational programs, and community outreach - creating a synergy with which The Z can stimulate the community in common purpose. By encouraging the participation, experience, and understanding of the arts, we are furthering our commitment to inspire, educate, engage, and entertain our community. All of the ArtsBridge projects are about connections--people and ideas, page to stage, audience to artist, theatre to the human spirit. During the 2014-2015 season, the stars aligned to make for some truly unique, inspiring, and illuminating experiences.

An explosive and inspiring school-time performance for over 900 students

Our partnership with the Jewish Federation allowed 300 students to attend the thought-provoking performance of Simon Wiesenthal: Nazi Hunter at no cost Page to Stage book club read and discussed Branded on My Arm and My Soul, A Holocaust Memoir by Abe Landau Special Exhibit curated by Spinner Publications in the Penler Space highlighting Abe Landau’s life, which was open to members of both the Mainstage and School-time audiences prior to the shows.

50 Students from Normandin and Hastings Middle Schools participated in a once-in-a-lifetime on-stage Master Class with the artists Pre-performance block party brought in amazing local artists and performance, and was free and open to the public Over 100 complimentary and discounted tickets distributed to students and teachers

From seeing world-class dance and music performances with my family to actually dancing on stage with the New Bedford Ballet, The Zeiterion (or The “Z” as we like to call it) has become a cultural touchstone in my life.” – Brooke Spencer, Age 17

Actor Tom Dugan, star of Wiesenthal, attends YomHaShoah ceremony at the Buttonwood Park Holocaust Memorial alongside the Mayor and members of the Jewish Federation.

My students loved it! They were very energetic when we came back to the school and were already working on creating rhythms and beats.” – Daniela Chirigotis, Hastings Middle School

The life of Simon Wiesenthal and his teaching remind people to fight against hatred… It’s important for young people to see the show of someone telling the story of Wiesenthal. What he did is very powerful.” – Cynthia Yoken

The Z is grateful to the local and regional businesses for their investment in our Corporate Sponsor program, and recognizing the importance of a vibrant performing arts center in our community. 2014-2015 SPONSORS:

Special Thanks to: Senator Mark Montigny, Representative Antonio Cabral, Mayor Jon Mitchell, New Bedford City Council, New Bedford Office of Tourism, our Board of Trustees, our volunteer corps and all our wonderful donors and members

The Z hosts over

The Z has a economic impact on the community.

and teachers participate in curriculum related education programs at The Z.

to low-income children and families.