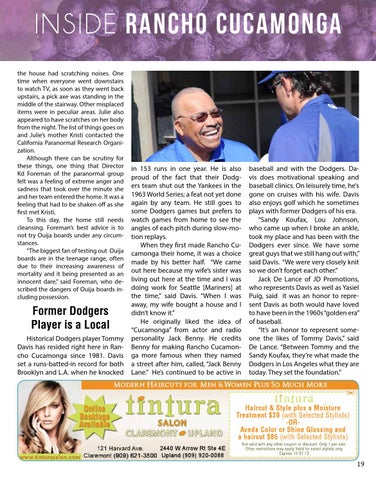 INSIDE rancho cucamonga the house had scratching noises. One time when everyone went downstairs to watch TV, as soon as they went back upstairs, a pick axe was standing in the middle of the stairway. Other misplaced items were in peculiar areas. Julie also appeared to have scratches on her body from the night. The list of things goes on and Julie’s mother Kristi contacted the California Paranormal Research Organization. Although there can be scrutiny for these things, one thing that Director Kd Foreman of the paranormal group felt was a feeling of extreme anger and sadness that took over the minute she and her team entered the home. It was a feeling that had to be shaken off as she first met Kristi. To this day, the home still needs cleansing. Foreman’s best advice is to not try Ouija boards under any circumstances. “The biggest fan of testing out Ouija boards are in the teenage range, often due to their increasing awareness of mortality and it being presented as an innocent dare,” said Foreman, who described the dangers of Ouija boards including possession.

Former Dodgers Player is a Local Historical Dodgers player Tommy Davis has resided right here in Rancho Cucamonga since 1981. Davis set a runs-batted-in record for both Brooklyn and L.A. when he knocked

in 153 runs in one year. He is also proud of the fact that their Dodgers team shut out the Yankees in the 1963 World Series; a feat not yet done again by any team. He still goes to some Dodgers games but prefers to watch games from home to see the angles of each pitch during slow-motion replays. When they first made Rancho Cucamonga their home, it was a choice made by his better half. “We came out here because my wife’s sister was living out here at the time and I was doing work for Seattle [Mariners] at the time,” said Davis. “When I was away, my wife bought a house and I didn’t know it.” He originally liked the idea of “Cucamonga” from actor and radio personality Jack Benny. He credits Benny for making Rancho Cucamonga more famous when they named a street after him, called, “Jack Benny Lane.” He’s continued to be active in

baseball and with the Dodgers. Davis does motivational speaking and baseball clinics. On leisurely time, he’s gone on cruises with his wife. Davis also enjoys golf which he sometimes plays with former Dodgers of his era. “Sandy Koufax, Lou Johnson, who came up when I broke an ankle, took my place and has been with the Dodgers ever since. We have some great guys that we still hang out with,” said Davis. “We were very closely knit so we don’t forget each other.” Jack De Lance of JD Promotions, who represents Davis as well as Yasiel Puig, said it was an honor to represent Davis as both would have loved to have been in the 1960s “golden era” of baseball. “It’s an honor to represent someone the likes of Tommy Davis,” said De Lance. “Between Tommy and the Sandy Koufax, they’re what made the Dodgers in Los Angeles what they are today. They set the foundation.”

Not valid with any other coupon or discount. Only 1 per visit. Other restrictions may apply. Valid for select stylists only. Expires 10-31-13