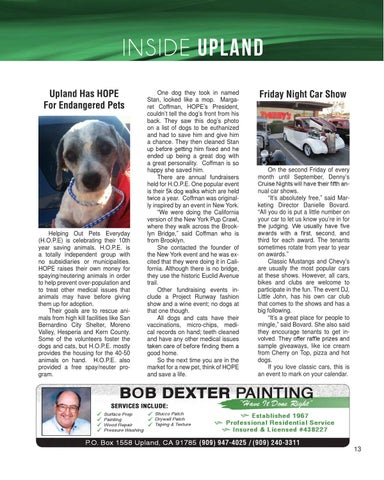 INSIDE Upland Upland Has HOPE For Endangered Pets

Helping Out Pets Everyday (H.O.P.E) is celebrating their 10th year saving animals. H.O.P.E. is a totally independent group with no subsidiaries or municipalities. HOPE raises their own money for spaying/neutering animals in order to help prevent over-population and to treat other medical issues that animals may have before giving them up for adoption. Their goals are to rescue animals from high kill facilities like San Bernardino City Shelter, Moreno Valley, Hesperia and Kern County. Some of the volunteers foster the dogs and cats, but H.O.P.E. mostly provides the housing for the 40-50 animals on hand. H.O.P.E. also provided a free spay/neuter program.

One dog they took in named Stan, looked like a mop. Margaret Coffman, HOPE’s President, couldn’t tell the dog’s front from his back. They saw this dog’s photo on a list of dogs to be euthanized and had to save him and give him a chance. They then cleaned Stan up before getting him fixed and he ended up being a great dog with a great personality. Coffman is so happy she saved him. There are annual fundraisers held for H.O.P.E. One popular event is their 5k dog walks which are held twice a year. Coffman was originally inspired by an event in New York. “We were doing the California version of the New York Pup Crawl, where they walk across the Brooklyn Bridge,” said Coffman who is from Brooklyn. She contacted the founder of the New York event and he was excited that they were doing it in California. Although there is no bridge, they use the historic Euclid Avenue trail. Other fundraising events include a Project Runway fashion show and a wine event; no dogs at that one though. All dogs and cats have their vaccinations, micro-chips, medical records on hand; teeth cleaned and have any other medical issues taken care of before finding them a good home. So the next time you are in the market for a new pet, think of HOPE and save a life.

On the second Friday of every month until September, Denny’s Cruise Nights will have their fifth annual car shows. “It’s absolutely free,” said Marketing Director Danielle Bovard. “All you do is put a little number on your car to let us know you’re in for the judging. We usually have five awards with a first, second, and third for each award. The tenants sometimes rotate from year to year on awards.” Classic Mustangs and Chevy’s are usually the most popular cars at these shows. However, all cars, bikes and clubs are welcome to participate in the fun. The event DJ, Little John, has his own car club that comes to the shows and has a big following. “It’s a great place for people to mingle,” said Bovard. She also said they encourage tenants to get involved. They offer raffle prizes and sample giveaways, like ice cream from Cherry on Top, pizza and hot dogs. If you love classic cars, this is an event to mark on your calendar.