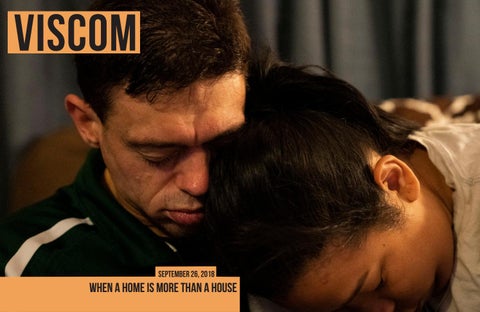 When A Home is More Than A House Alfreda and Preston support each other to navigate the challenges in their life. By Wangyuxuan Xu

Preston leaves a love note on the mirror for Alfreda before he leaves for work on Oct. 9, 2018.

Alfreda Silvey takes Preston’s wheelchair out of the trunk as he waits in his seat. Preston usually set up his wheelchair by himself. However, this time they drove another car for shopping, and there was not enough room in the rear for his wheelchair.

is 5:45 in the early morning, and the whole town is still in a slumber. All of a sudden, the light in a small trailer illuminates the deep recesses of an alley. It gleams through the darkness, like a beacon guiding the way home for sailors. Preston rolls his wheelchair to the kitchen, followed closely by his two dogs, Ube and MoMo, then fires up the stove to prepare her wife’s breakfast. The stove is higher than his height, which makes the cooking a little bit harder, but he fries an egg with

two sausages quite adeptly like he has already done hundreds of times. As the clock ticks slowly toward 6:40, the front door opens and his wife, Alfreda, pops her head out. “Dadi, I am back!” That’s basically how their day starts. Alfreda works night shift in Ohio University Culinary Services doing heavy-duty preparations while Preston works day shift. 40 minutes in the early morning and three hours after the sunset is the

Preston lifts his wheelchair into his car as he leaves to go grocery shopping on September 16, 2018, in the Plains, Ohio. Preston, a survivor of neuroblastoma, has been fighting illnesses for his entire life.

Preston Silvey lugs the trash to the backyard after coming back from his work. Preston and Alfreda share equally in housework.

only time they can be in each otherâ&#x20AC;&#x2122;s arms, share one blanket, and gossip. That is not the only the problem they have to deal with in daily life. Prestonâ&#x20AC;&#x2122;s health issues and their poor financial situation are the major sources of stress. Preston had a tumor called neuroblastoma in his childhood, but he was lucky to survive it. However, the radiation treatment causes a series of side effects, such as shortness of breath, shortness of stature, and loss of sensitivity in his lower extremities. The life in a wheelchair and the higher risk of infection were nightmares which haunted them for a long time. Nonetheless, those challenges never led to a split in their relationship. In fact, those challenges make their relationship stronger.

9.01 Their refrigerator is their love board. They posted their sweetest memory on it.

Alfreda finally goes back home around 6:30 am and their two dogs, Momo and Ube, jump on her to welcome their mom back.

“When I first saw his picture, I have this feeling that I found the right one.” 2011 is when this fairy-tale love story started. Preston and Alfreda met on an online dating site called Filipina Hardstock. At the first glance of each other’s pictures, they were both attracted to each other. However, the site required users to pay a lot of money in order to get correspondence from the other person. Back then, Alfreda didn’t have the money to pay for it and neither did Preston. Feeling hopeless, Preston typed Alfreda’s name in the Facebook and surprisingly found that she was using her real name on the dating site. Alfreda immediately recognized the man with the blue eyes that she was looking for and was attracted to his honesty, humor and strong sense of responsibility. After online dating for two years, Preston decided to meet her in person, which means he had to find a way to get the visa, pay the plane tickets he couldn’t afford and also go on a 24-hour journey alone. It was hard for a person who has to live in a wheelchair. But finally, he made it through and the two lovers finally felt the warmth of each other’s body. “I never imagined [I would] get married ever before I met with Alfreda,” Preston said. “I think it was God brought us together.”

Preston and Alfreda lean on each other in a local community church.

Preston picks up dirty laundry as he sits on the floor at home on September 16, 2018. Preston is not supposed to lift over 10 pounds 90 percent of the time. However, he takes care of most of the heavy-duty housework because he wants Alfreda to be able to rest when she gets home.

How do people react to a marriage between a disabled white man and a Fillipina? The answer could be cruel. Stereotypes still exist even five years into their marriage. An old woman who they met in the hospital one time kept asking Alfreda if she was the assigned nurse of Preston. One of Preston’s friend yelled aloud to Preston in front of Alfreda, saying “you’ll need to let your wife to do everything in the house. You just need to sit back and watch TV.” Some of Alfreda’s friends urged her to find a guy with money, not a disabled man who needs nursing. Those skeptical voices flooding over Preston and Alfreda made them upset for a while, but they realized that this is their own life and don’t need to listen to other people’s judgements.

9.06 Preston dries Alfreda’s hair before she leaves for work on September 16, 2018, at their home in the Plains, Ohio. “My mom thought it should be me always taking care of him, but it was him taking care of me,” Alfreda said. 9.07 Alfreda and her dogs look out of the window while waiting for Preston to come home.

“I don’t tend to think that a man should be bossing a woman around for every, every little thing. I tend to think it really is a partnership. ”

Some with disabilities expect to be taken care of all the time. But Preston And Alfreda? They are different. If there is something Preston can do so Alfreda can take a good rest after her very physical job, he will. “Philippines is very patriarchal -- wives are subservient to their husbands. The man in the house has the last say in terms of decision making,” said Adonis Durado, who is Preston and Alfreda’s best friend. “In Preston and Alfreda’s case, they are equal.” In 2015, Preston had the PICC lines swinging her arm. He wasn’t supposed to lift over 10 pounds at 90 percent of the time. He was

sweeping and mopping the floor, putting things away, and doing stuff he probably shouldn’t have been doing. He did it anyway because he didn’t think she should have to go to work then come home and take care of the house also. Some of that was due to his pride but mostly he didn’t want to be useless. However, Alfreda knows his limitations and tries to do the work before he can. Their roles in their relationship are not simply husband or wife. They are like good friends -- sometimes the parent who the other one needs. “My mom thought it should be me always taking care of him, but it was him taking care of me,” Alfreda said.

“We are thankful for what we have.” Preston and Alfreda are now living in a trailer with their children, which are two dogs: Momo, Ube, and three cats, Penny, Coco and Khulet. The size might be fine for two adults, but with all the pets and his wheelchairs, this trailer feels cramped for such a big family. “My only regret I think is just I wish I would had a better job to begin with so I wouldn’t had to live in this stupid box,” Preston said. “And she wouldn’t have all the financial concerns that we have.” In the meantime, Alfreda is pretty positive about this trailer and the financial issues they are facing. Being motherly since childhood, she was a role model for her siblings, the support for her family and most importantly, the hope through the darkness. However, it doesn’t mean she won’t be afraid. Preston’s neuroblastoma could kill him anytime, anywhere. Although she was aware of the disease when they first met, she was still afraid when she saw Preston struggling on the edge of death. Yet she never cried in front of her husband because she knew that he was getting strength from her. Now Preston has been cured from the latest infection. The near death experience teaches them to be thankful for what they have. 9.09 Preston and Alfreda laugh as they watch their favorite comedian Jo Koy’s talk show on a Tuesday night at their home on September 18, 2018. Alfreda took a night off after injuring her wrists at work.It was the only night she and Preston were able to stay overnight with each other during weekdays in that month.

Ube and Momo run toward Alfreda and Preston before they leave home for church. 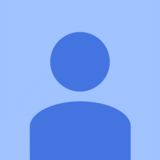 Alfreda and Preston support each other to navigate the challenges in their life.

Alfreda and Preston support each other to navigate the challenges in their life.