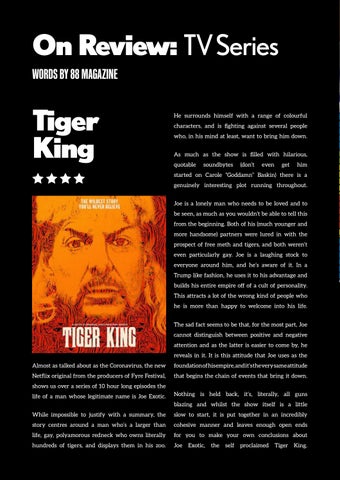 He surrounds himself with a range of colourful characters, and is fighting against several people who, in his mind at least, want to bring him down. As much as the show is filled with hilarious, quotable

started on Carole “Goddamn” Baskin) there is a genuinely interesting plot running throughout. Joe is a lonely man who needs to be loved and to be seen, as much as you wouldn’t be able to tell this from the beginning. Both of his (much younger and more handsome) partners were lured in with the prospect of free meth and tigers, and both weren’t even particularly gay. Joe is a laughing stock to everyone around him, and he’s aware of it. In a Trump like fashion, he uses it to his advantage and builds his entire empire off of a cult of personality. This attracts a lot of the wrong kind of people who he is more than happy to welcome into his life. The sad fact seems to be that, for the most part, Joe cannot distinguish between positive and negative attention and as the latter is easier to come by, he reveals in it. It is this attitude that Joe uses as the Almost as talked about as the Coronavirus, the new

foundation of his empire, and it’s the very same attitude

Netflix original from the producers of Fyre Festival,

that begins the chain of events that bring it down.

shows us over a series of 10 hour long episodes the life of a man whose legitimate name is Joe Exotic.

Nothing is held back, it’s, literally, all guns blazing and whilst the show itself is a little

While impossible to justify with a summary, the

slow to start, it is put together in an incredibly

story centres around a man who’s a larger than

for you to make your own conclusions about

hundreds of tigers, and displays them in his zoo.