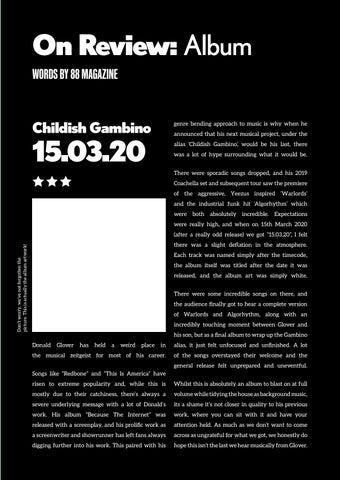 On Review: Album WORDS BY 88 MAGAZINE

genre bending approach to music is why when he announced that his next musical project, under the

alias ‘Childish Gambino’, would be his last, there was a lot of hype surrounding what it would be. There were sporadic songs dropped, and his 2019 Coachella set and subsequent tour saw the premiere of the aggressive, Yeezus inspired ‘Warlords’ and the industrial funk hit ‘Algorhythm’ which were both absolutely incredible. Expectations were really high, and when on 15th March 2020 (after a really odd release) we got “15.03.20”, I felt

Don’t worry, we’ve not forgotten the picture. This is actually the album artwork!

there was a slight deflation in the atmosphere. Each track was named simply after the timecode, the album itself was titled after the date it was released, and the album art was simply white. There were some incredible songs on there, and the audience finally got to hear a complete version of Warlords and Algorhythm, along with an incredibly touching moment between Glover and his son, but as a final album to wrap up the Gambino in

alias, it just felt unfocused and unfinished. A lot

the musical zeitgeist for most of his career.

of the songs overstayed their welcome and the

general release felt unprepared and uneventful. Songs like “Redbone” and “This Is America” have risen to extreme popularity and, while this is

Whilst this is absolutely an album to blast on at full

mostly due to their catchiness, there’s always a

volume while tidying the house as background music,

severe underlying message with a lot of Donald’s

work. His album “Because The Internet” was

work, where you can sit with it and have your

released with a screenplay, and his prolific work as

attention held. As much as we don’t want to come

a screenwriter and showrunner has left fans always

across as ungrateful for what we got, we honestly do

digging further into his work. This paired with his

hope this isn’t the last we hear musically from Glover. 55