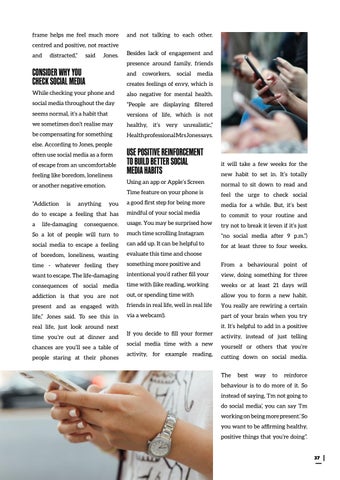 frame helps me feel much more

and not talking to each other.

centred and positive, not reactive and

Besides lack of engagement and presence around family, friends

CONSIDER WHY YOU CHECK SOCIAL MEDIA

creates feelings of envy, which is

While checking your phone and

social media throughout the day

seems normal, it’s a habit that

versions of life, which is not

we sometimes don’t realise may

be compensating for something

else. According to Jones, people often use social media as a form of escape from an uncomfortable feeling like boredom, loneliness

it will take a few weeks for the new habit to set in. It’s totally

Using an app or Apple’s Screen

normal to sit down to read and

Time feature on your phone is

feel the urge to check social

a good first step for being more

media for a while. But, it’s best

do to escape a feeling that has

mindful of your social media

to commit to your routine and

usage. You may be surprised how

try not to break it (even if it’s just

So a lot of people will turn to

social media to escape a feeling

can add up. It can be helpful to

for at least three to four weeks.

evaluate this time and choose

time - whatever feeling they

something more positive and

From a behavioural point of

want to escape. The life-damaging

intentional you’d rather fill your

view, doing something for three

weeks or at least 21 days will

addiction is that you are not

out, or spending time with

allow you to form a new habit.

present and as engaged with

You really are rewiring a certain

life,” Jones said. To see this in

part of your brain when you try

or another negative emotion. “Addiction

it. It’s helpful to add in a positive

real life, just look around next time you’re out at dinner and chances are you’ll see a table of people staring at their phones

If you decide to fill your former

activity, instead of just telling

social media time with a new

yourself or others that you’re

cutting down on social media. The

behaviour is to do more of it. So instead of saying, ‘I’m not going to do social media’, you can say ‘I’m working on being more present.’ So you want to be affirming healthy, positive things that you’re doing”.