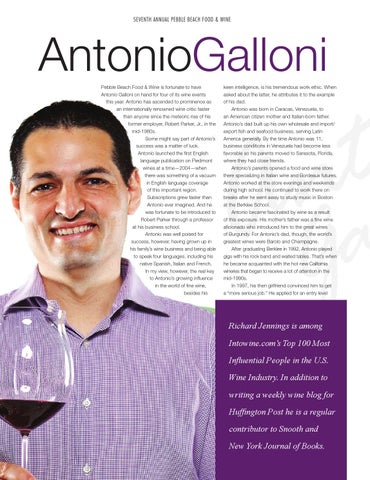 AntonioGalloni Pebble Beach Food &amp; Wine is fortunate to have Antonio Galloni on hand for four of its wine events this year. Antonio has ascended to prominence as an internationally renowned wine critic faster than anyone since the meteoric rise of his former employer, Robert Parker, Jr., in the mid-1980s. Some might say part of Antonio’s success was a matter of luck. Antonio launched the first English language publication on Piedmont

keen intelligence, is his tremendous work ethic. When asked about the latter, he attributes it to the example of his dad. Antonio was born in Caracas, Venezuela, to an American citizen mother and Italian-born father. Antonio’s dad built up his own wholesale and import/ export fish and seafood business, serving Latin America generally. By the time Antonio was 11, business conditions in Venezuela had become less favorable so his parents moved to Sarasota, Florida, where they had close friends.

wines at a time—2004—when there was something of a vacuum in English language coverage of this important region. Subscriptions grew faster than Antonio ever imagined. And he was fortunate to be introduced to Robert Parker through a professor at his business school. Antonio was well poised for success, however, having grown up in his family’s wine business and being able to speak four languages, including his native Spanish, Italian and French. In my view, however, the real key to Antonio’s growing influence in the world of fine wine, besides his

Antonio’s parents opened a food and wine store there specializing in Italian wine and Bordeaux futures. Antonio worked at the store evenings and weekends during high school. He continued to work there on breaks after he went away to study music in Boston at the Berklee School. Antonio became fascinated by wine as a result of this exposure. His mother’s father was a fine wine aficionado who introduced him to the great wines of Burgundy. For Antonio’s dad, though, the world’s greatest wines were Barolo and Champagne. After graduating Berklee in 1992, Antonio played gigs with his rock band and waited tables. That’s when he became acquainted with the hot new California wineries that began to receive a lot of attention in the mid-1990s. In 1997, his then girlfriend convinced him to get a “more serious job.” He applied for an entry level

Richard Jennings is among Intowine.com’s Top 100 Most Influential People in the U.S. Wine Industry. In addition to writing a weekly wine blog for Huffington Post he is a regular contributor to Snooth and New York Journal of Books. 64 PBFW | 2014 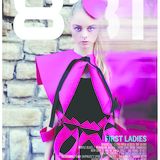