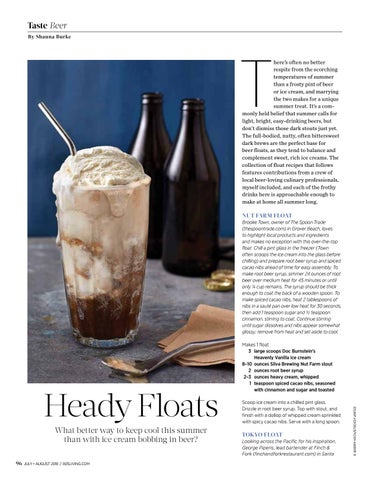 here’s often no better respite from the scorching temperatures of summer than a frosty pint of beer or ice cream, and marrying the two makes for a unique summer treat. It’s a commonly held belief that summer calls for light, bright, easy-drinking beers, but don’t dismiss those dark stouts just yet. The full-bodied, nutty, often bittersweet dark brews are the perfect base for beer floats, as they tend to balance and complement sweet, rich ice creams. The collection of float recipes that follows features contributions from a crew of local beer-loving culinary professionals, myself included, and each of the frothy drinks here is approachable enough to make at home all summer long. NUT FARM FLOAT Brooke Town, owner of The Spoon Trade (thespoontrade.com) in Grover Beach, loves to highlight local products and ingredients and makes no exception with this over-the-top float. Chill a pint glass in the freezer (Town often scoops the ice cream into the glass before chilling) and prepare root beer syrup and spiced cacao nibs ahead of time for easy assembly. To make root beer syrup, simmer 24 ounces of root beer over medium heat for 45 minutes or until only ¼ cup remains. The syrup should be thick enough to coat the back of a wooden spoon. To make spiced cacao nibs, heat 2 tablespoons of nibs in a sauté pan over low heat for 30 seconds, then add 1 teaspoon sugar and ½ teaspoon cinnamon, stirring to coat. Continue stirring until sugar dissolves and nibs appear somewhat glossy; remove from heat and set aside to cool.

What better way to keep cool this summer than with ice cream bobbing in beer? 96

Scoop ice cream into a chilled pint glass. Drizzle in root beer syrup. Top with stout, and finish with a dollop of whipped cream sprinkled with spicy cacao nibs. Serve with a long spoon.

TOKYO FLOAT Looking across the Pacific for his inspiration, George Piperis, lead bartender at Finch & Fork (finchandforkrestaurant.com) in Santa 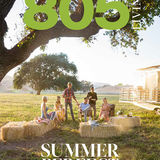