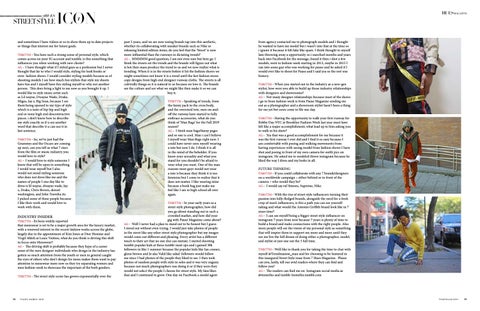 and sometimes I have videos or so to show them up to date projects or things that interest me for future goals. TH&TTM -​Y ​ ou have such a strong sense of personal style, which

comes across on your IG account and tumblr, is this something that influences you when working with new clients? AG -​ I have thought what if I styled guys as a profession but I never thought that far to who I would style, styling for look books or even fashion shows. I would consider styling models because as of shooting models I see how much fun stylists that style my shoots have fun and I myself have fun styling myself so why not another person.  This does bring a light to me now as you brought it up. I would like to style music artist such as Lil wayne, Dwayne Wade, Drake, Migos, Jay z, Big Sean, because I see them being opened to my type of style which is a taste of hip hip and high end or none high end descontructive pieces. i don’t know how to describe my style exactly so if u see another word that describe it u can use it in last sentence. TH&TTM -​S ​ o, we’ve just had the

Grammys and the Oscars are coming up next, can you tell us what 7 stars from the film or music industry you would love to style? AG -​ I would love to style someone I know that will be open to something I would wear myself but I also would not mind styling someone who does not dress like me and the names of people I one day like to dress is lil wayne, dwayne wade, Jay z, Drake, Chris Brown, denzel washington, and John Travolta etc I picked some of these people because I like their work and would love to work with them.

TH&TTM -​I​ ts been widely reported

that menswear is set to be a major growth area for the luxury market, with a renewed interest in the recent fashion weeks across the globe, largely due to the appointment of Kim Jones at Dior Homme and Virgil Abloh at Louis Vuitton, what do you think is driving this shift in focus onto Menswear? AG -​ The driving shift is probably because they hype of a career some of the men designer individuals who design in the industry has gotten so much attention from the youth or men in general caught the eyes of others who don't design for mens makes them want to pay attention to menswear more now so they try separating women and men fashion week to showcase the important of the both genders. TH&TTM -​Th ​ e street style scene has grown exponentially over the

past 5 years, and we are now seeing brands tap into this aesthetic, whether its collaborating with sneaker brands such as Nike or releasing limited edition items, do you feel that the ‘Street’ is now more influential than the runways in dictating trends? AG -​ MMMMM good question, I am not even sure but here go. I think the streets set the trends and the brands will figure out what is hot then mass produce the trend to us and we now realize what is trending. When it is in the streets before it hit the fashion shows we might sometimes not know it is a trend until the fast fashion stores copy designs from high end designer runway cloths. The streets is all culrtrally things so it is natural to us because we love it. The brands see the culture and see what we might like then make it so we can buy it. TH&TTM -​​Speaking of trends, from

the fanny pack to the cross body, and the oversized tote, men on-andoff the runway have started to fully embrace accessories, what do you think of ‘Man Bags’ for the Fall 2019 season? AG -​ I think man bags/fanny pages and so one is cool. Man i can't believe I myself wear Man Bags right now. I could have never seen myself wearing a tote but now I do. I think it is all in the mind of the beholder. If you know your sexuality and what you stand for you shouldn't be afraid to wear what you want. One of the man reasons most guys would not wear a tote is because they think it is too feminine but I come to realize that it does not matter. I like wearing mine because a book bag just make me feel like I am in high school all over again. TH&TTM -​In your early years as a

street style photographer, how did you go about standing out in such a crowded market, and how did your gig with Pause Magazine come about? AG -​ Well I never had a plan to stand out to be honest but I guess I stood out without even trying. I would just take photos of people in the street like any other street style photographer but my images would come out different and pleasing. Every artist has a different touch to their art that no one else can imitate. I started shooting tumblr popular kids at these tumblr meet ups and i gained 30k followers in like 1 summer because the popular kids like Ian conner, glenn brown and Jo aka Valid like salad followers would follow me since I had photos of the people they liked to see. I then took photos of random people with style in soho and it was very organic because not much photographers was doing it or if they were they would not select the people I choose for street style. My fans likes that and I continued to grow. One day on Facebook a model agent

from agency contacted me to photograph models and i thought he wanted to have me model but i wasn't into that at the time so i ignore it because it felt fake like spam. I think thought to myself Iam throwing away a opportunity so i searched months and years back into Facebook for the message, found it then i shot a few models, went to fashion week starting in 2013, maybe in 2015 I ran into some guy who was working for pause and he asked if I would ever like to shoot for Pause and I said yea so the rest was history. TH&TTM -​​When you started out in the industry as a new-gen

stylist, how were you able to build up those industry relationships with designers and showrooms? AG -​ Not many designer relationships because most of the shows i go to from fashion week is from Pause Magazine sending me out as a photographer and a showroom stylist hasn't been a thing for me yet but soon come to life one day. TH&TTM -​​Having the opportunity to walk your first runway for

Bobby Day NYC at Brooklyn Fashion Week last year must have felt like a major accomplishment, what lead up to him asking you to walk in his show? AG -​ Yea that was a good accomplishment for me because it was the first runway I ever did and I find it so easy because I am comfortable with posing and walking movements from having experiences with seeing model from fashion shows I have shot and posing in front of my own camera for outfit pics on instagram. He asked me to modeled throw instagram because he liked the way I dress and my looks in all. FUTURE THINKING

on a worldwide campaign – either behind or in front of the camera – who would they be? AG -​ I would say raf Simons, Supreme, Nike.

TH&TTM -​With the rise of street style influencers turning their

passion into fully-fledged brands, alongside the need for a fresh crop of men’s influencers, is this a path you can see yourself taking and what would the Antonio Griffith brand look like in 7 years time? AG -​ I can see myself being a bigger street style influencer on instagram 7 years from now because 7 years is plenty of time to build a brand and make connections with the right people. Also more people will see the vision of my personal style as something that will inspire them to support me more and more until they see me live the full dream of doing either a photographer, model, and stylist or just one out the 3 full time. TH&TTM -​We’d like to thank you for taking the time to chat with

myself @Trendmaison_man and for choosing to be featured in this inaugural Street Style issue from 7 Hues Magazine. Please can you, lastly, tell our avid readers where they can find and follow you? AG -​ The readers can find me on Instagram social media as @itzmetho and tumblr itzmetho.tumblr.com 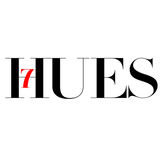