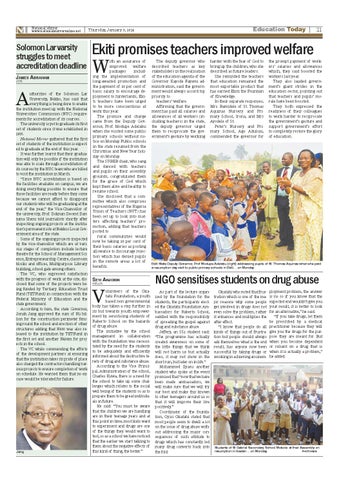 uthorities of the Solomon Lar University, Bokko, has said that everything is being done to enable the institution meet up with the National Universities Commission (NUC) requirements for accreditation of its courses. The university is yet to graduate its first set of students since it was established in 2005. National Mirror gathered that the first set of students of the institution is expected to graduate at the end of this year. It was further learnt that their graduation will only be possible if the institution was able to scale through accreditation of its courses by the NUC team who are billed to visit the institution in March. “Since NUC accreditation is based on the facilities available on campus, we are doing everything possible to ensure that those facilities are ready before they come because we cannot afford to disappoint our students who will be graduating at the end of the year,” the Vice-Chancellor of the university, Prof. Doknan Decent Danjuma Sheni told journalists shortly after inspecting ongoing projects at the institution’s permanent site at Bokkos Local Government area of the state. Some of the ongoing projects inspected by the vice-chancellor which are at various stages of completion include lecture theatre for the School of Management Science, Entrepreneurship Centre, classroom blocks and offices, Multipurpose Library building, school gate among others. The VC, who expressed satisfaction with the progress of work at the site, disclosed that some of the projects were being funded by Tertiary Education Trust Fund (TETFund) in conjunction with the Federal Ministry of Education and the state government. According to him, the state Governor, Jonah Jang approved the sum of N2 billion for the construction perimeter fencing round the school and erection of other structures adding that N600 was also released to the institution by TETFund in the first set and another N400m for projects in the school. The VC while commending the efforts of the development partners at ensuring that the institution takes its pride of place also charged the contractors handling various projects to ensure completion of work on schedule. He warned them that no excuse would be tolerated for failure.

ith an assurance of improved welfare packages including the implementation of long-awaited promotion and the payment of 20 per cent of basic salary to encourage deployment to hinterlands, Ekiti teachers have been urged to be more conscientious at work this year. The promise and charge came from the Deputy Governor, Prof. Modupe Adelabu when she visited some public primary schools without notice on Monday. Public schools in the state resumed from the Christmas and New Year holiday on Monday. The SUBEB chair, who sang and danced with teachers and pupils on their assembly grounds, congratulated them for the grace of God which kept them alive and healthy to resume school. She disclosed that a committee which also comprises representatives of the Nigeria Union of Teachers (NUT) has been set up to look into matters affecting teachers’ promotion, adding that teachers posted to rural communities would now be taking 20 per cent of their basic salaries as posting allowance to discourage rejection which has denied pupils in the remote areas a lot of benefits.

olunteers of the Okatahi Foundation, a youth based non governmental body has taken a step further in its bid towards youth empowerment by sensitising students of Raberto School on the hazards of drug abuse. The initiative by the school management in collaboration with the foundation was necessitated by the need for the students to be adequately and efficiently informed about the destructive tenets of drug and substance abuse. According to the Vice Principal, Administration of the school, Charles Kuwa, there is a need for the school to take up some challenges which relates to the social well being of the students so as to prepare them to be great individuals in future. He said: “You must be aware that the children we are handling are in their teenage years and at this point in time, most kids want to experiment and drugs are one of the things they would want to test, so as a school we have noticed that the earlier we start talking to them about the negative effects of this kind of thing, the better.”

The deputy governor who described teachers as key stakeholders in the realisation of the education agenda of the Governor Kayode Fayemi administration, said the government would always accord top priority to teachers’ welfare. Affirming that the government has paid all salaries and allowances of all workers (including teachers) in the state, the deputy governor urged them to reciprocate the government’s gesture by working

harder with the fear of God to bring up the children, who she described as future leaders. She reminded the teachers that education remained the most exportable product that has earned Ekiti the Fountain of Knowledge. In their separate responses, Mrs. Bamidele of St. Thomas Aquinas Nursery and Primary School, Irona, and Mrs Ayodele of St. Peter’s Nursery and Primary School, Ago Aduloju, commended the governor for

the prompt payment of workers’ salaries and allowances which, they said boosted the workers last year. They also lauded government’s giant strides in the education sector, pointing out that teachers and pupils’ morale have been boosted. They both expressed the readiness of their colleagues to work harder to reciprocate the government’s gesture and support government’s effort to completely restore the glory of education.

NGO sensitises students on drug abuse As part of the lecture organised by the foundation for the students, the participants elected the Okatahi Foundation Ambassadors for Raberto School, saddled with the responsibility of spreading the gospel against drug and substance abuse. Jeffery, an SS2 student said: “The programme has actually created awareness on some of the little things that we think will not harm us but actually does; it may not show in the short run, but later on in life.” Mohammed Ilyasu another student who spoke at the event promised that “now that we have been made ambassadors, we will make sure that we will try our best and make this known to other teenagers around us so that it will improve their live positively.” Coordinator of the foundation, Oyisi Okatahi stated that most people seem to dwell a lot on the issue of drug abuse without addressing the major consequences of such attitude to drugs which has constantly led many drug converts back into the fold.

Okatahi who noted that frustration which is one of the major reasons why some people get involved in drugs does not even solve the problem, rather it enhances and multiplies the after effect. “I know that people do all kinds of things out of frustration but people should always ask themselves what is the end result, has anyone now been successful by taking drugs or smoking in achieving an unem-

ployment problem, the answer is no so if you know that the expected end wouldn’t give you your result, it is better to look for an alternative,” he said. “If you take drugs, let them be prescribed by a medical practitioner because they will give you the drugs for the purpose they are meant for. But when you become dependent or reliant on a drug that is when it is actually a problem,” he added.

Students of St Gabriel Secondary School Mokola at their Assembly on resumption in Ibadan ... on Monday. PHOTO:NAN 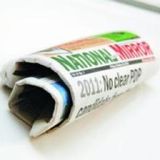