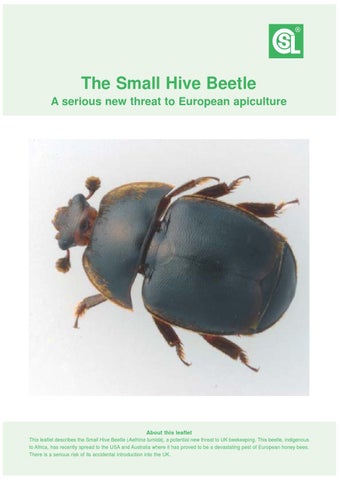 About this leaflet This leaflet describes the Small Hive Beetle (Aethina tumida), a potential new threat to UK beekeeping. This beetle, indigenous to Africa, has recently spread to the USA and Australia where it has proved to be a devastating pest of European honey bees. There is a serious risk of its accidental introduction into the UK.

It is not known how the beetle reached either

(Murray) (commonly referred to as the 'SHB'),

the USA or Australia, although in the USA

is a major threat to the long-term

shipping is considered the most likely route.

sustainability and economic prosperity of UK

By the time the beetle was detected in both

beekeeping and, as a consequence, to

countries it was already well established.

agriculture and the environment through disruption to pollination services, the value of

The potential implications for European

which is estimated at up to ÂŁ200 million

apiculture are enormous, as we must now

The beetle is indigenous to Africa, where it is

as in Australia and the USA.

considered a minor pest of honey bees, and until recently was thought to be restricted to that continent. However, in 1998 it was

Could the SHB reach the UK?

detected in Florida and it is now widespread

Yes it could. There is a serious risk that the

in the USA. It is called the small hive beetle

SHB could be transported and introduced into

to distinguish it from other minor pests of bee

the UK, for instance:

At the time of writing, the SHB is not

in swarms of bees or feral colonies

thought to be present in the UK.

The beetle can multiply to huge numbers

in used beekeeping equipment, comb and

within infested colonies where it eats brood,

destroys combs and if uncontrolled ultimately

on imported goods such as fruit

in soil material, for instance with imported plants or carried on heavy machinery

severe. Within two years of its discovery, at

least 20,000 colonies were destroyed by the

beetle, costing many millions of dollars. It has also been found in Manitoba, Canada where it arrived with beeswax imported from the USA. In October 2002, it was found in New South Wales and Queensland, Australia. The economic consequences to the beekeeping industry in Australia are likely to be extremely serious, jeopardising bee exports, pollination services and honey production.

Small hive beetle biology The small hive beetle belongs to a family of scavenger beetles known as the Nitidulidae. Many of them are pests of fruit and stored food, and some like the SHB have a close association with social hymenoptera (bees, wasps and ants).

Adult beetle anatomy Adult beetles are oval in shape, 5-7 mm long and 3-4.5 mm wide. Immediately after emergence they are coloured reddish-brown, but darken to dark brown or black when fully mature. There is some variation in size but they are about one- third the size of a worker

bee. They have club shaped antennae, their

frame. They can also be found hiding in

bodies are broad and flattened dorso-

empty cells at the margins of the brood nest

ventrally, their wing cases (elytra) are covered with fine hairs and are short so that a few

segments of the abdomen are visible.

Adult beetles are attracted to bee colonies. Once inside, adult beetles lay eggs in irregular masses in hive crevices or brood combs. The eggs are white and about 1.5 x 0.25 mm. Beetles can, however, survive and also lay eggs on a range of fruit, particularly melons. However, it is not known if beetles regularly eat fruit as an alternative food source, or whether this is important for their spread.

Larval development After 2-6 days SHB eggs hatch, and the young beetle larvae begin to feed. SHB larvae have characteristic rows of spines on the back and 3 pairs of tiny prolegs near the head (which distinguishes them from wax moth larvae). After 10-14 days, the larvae Fig 2. View of beetleâ&#x20AC;&#x2122;s abdomen showing

have completed their growth and measure

Emergence of adults Adult beetles first emerge on average 3-4 weeks later. About one week after emergence adult beetles search for colonies in which to lay eggs. They disperse rapidly over large distances (perhaps 5-10 miles).

CSL small hive beetle surveillance The SHB is not thought to be present in the UK. However, from 2003, CSL bee inspectors are increasing statutory surveillance programmes to monitor for SHB presence. The NBU will use Geographical Information Systems (GIS) to prioritise this programme and target apiaries identified as "At risk". For instance, apiaries situated: in warmer parts of the country on sandy soils (suitable for SHB Fig 4. Views of small hive beetle larvae

close to civilian and military airports

close to freight depots and ports of entry -

protruding from the rear

imported bees from countries where the

SHB is known to be present

potential. Individual female beetles are capable of producing up to a thousand eggs during their 4-6 month life.

Pupation The next phase of the SHB's lifecycle takes place in the soil. Mature larvae will often mass on the hive bottom board and in corners of frames before moving outside. If feeding and developing on fruit, once mature they will attempt to crawl away looking for soil.

Fig 5. Use of GIS to identify apiaries at potential risk

Mainly lives and breeds on its primary host the honey bee - in colonies, stored comb and beekeeping equipment, but it can also survive and reproduce on certain types of fruit, particularly melons.

Adult beetles lay large numbers of eggs in the hive. Beetle larvae eat brood, pollen and honey. Larvae crawl out of the hive to pupate. Pupation usually occurs in soil outside the hive. Preference for warm sandy soils. Adults can fly at least 5 miles to infest new colonies.

bees have natural defences. For European honey bees in America and Australia (and therefore almost certainly the UK) the SHB is an extremely serious problem. The beetles multiply to huge numbers, their larvae tunnel through comb to eat brood, ruin stored honey, and ultimately destroy infested colonies or cause them to abscond.

The SHB cannot be eradicated once well established. In the

USA, beekeepers control SHB by using pesticides within the hive and in the surrounding soil, together with improved bee husbandry and changes to honey handling procedures.

The life cycle of the small hive beetle (Aethina tumida)

Feeding activities of the larvae causes fermentation and spoilage of honey. Severe damage can occur in honey houses. It has a slimy appearance and smells of ‘rotten oranges’

Close up of ‘Maggot-like’ SHB larva: Note spines on the dorsum and 3 prolegs near the head. Larvae reach maturity in 10-14 days and measure 11mm

Life cycle is completed in the soil. Larvae mature in 10-14 days and measure 10-11mm when fully grown. They crawl out of the hive at night to pupate in the soil. Adult beetles hatch out on average 3-4 weeks later. They measure 5-7mm (one - third the size of a worker bee) and are dark reddish brown to black

There can be up to 30 larvae per cell. There is no webbing or frass like wax moth infestation

Larvae and adults preferentially consume bee eggs and brood, as well as honey and pollen. Tens of thousands of larvae can be produced in each hive.

Further help and advice Have I found a small hive beetle? Check to see if those you have found match

the key identification points below.

behaviour: hides from the light

Suspect SHB adults or larvae should be sent

to the NBU for examination in a sealed

service to beekeepers in England and Wales.

container, such as a plastic tube or stiff

It provides diagnostic, consultancy and

research services to Department for

Environment, Food and Rural Affairs (Defra), Please provide as many details as possible of

where the sample was found (including,

where possible, its Ordnance Survey map

beekeepers. The Unit has modern facilities,

reference) and its country of origin if found on

including laboratories with first class computer

support, as well as 150 colonies and the apiary buildings to support them.

Do not send live beetles in the post. Kill them first by keeping them in a freezer overnight or by putting them in 70% ethanol (e.g. methylated spirits). Sampling forms and details are available to download from the NBU website www.nationalbeeunit.com or contact the NBU Laboratory Fig 6. Central Science Laboratory, Sand Hutton, York

National Bee Unit on behalf of Defra Horticulture & Potatoes Division, March 2003. The authors are grateful to the following for their photographs and technical assistance: Dr Mike 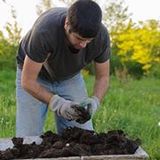