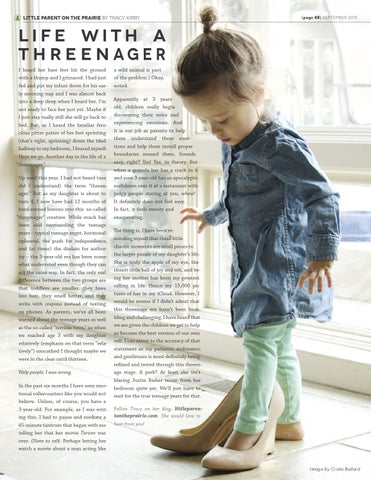 Life with a T h r e e n ager I heard her bare feet hit the ground with a thump and I grimaced. I had just fed and put my infant down for his early morning nap and I was almost back into a deep sleep when I heard her. I’m not ready to face her just yet. Maybe if I just stay really still she will go back to bed. But, as I heard the familiar ferocious pitter-patter of her feet sprinting (that’s right, sprinting) down the tiled hallway to my bedroom, I braced myself. Here we go. Another day in the life of a “threenager.” Up until this year, I had not heard (nor did I understand) the term “threenager.” But as my daughter is about to turn 4, I now have had 12 months of hard-earned lessons into this so-called “threenager” creature. While much has been said surrounding the teenage years – typical teenage angst, hormonal upheaval, the push for independence, and (at times) the disdain for authority – the 3-year-old era has been somewhat underrated even though they can act the same way. In fact, the only real difference between the two groups are that toddlers are smaller, they have less hair, they smell better, and they write with crayons instead of texting on phones. As parents, we’ve all been warned about the teenage years as well as the so-called “terrible twos,” so when we reached age 3 with my daughter relatively (emphasis on that term “relatively”) unscathed I thought maybe we were in the clear until thirteen. Welp people, I was wrong. In the past six months I have seen emotional rollercoasters like you would not believe. Unless, of course, you have a 3-year-old. For example, as I was writing this, I had to pause and mediate a 45-minute tantrum that began with me telling her that her movie Tarzan was over. (Note to self: Perhaps letting her watch a movie about a man acting like

a wild animal is part of the problem.) Okay, noted. Apparently at 3 years old, children really begin discovering their voice and experiencing emotions. And it is our job as parents to help them understand these emotions and help them install proper boundaries around them. Sounds easy, right? Yes! Yes, in theory. But when a granola bar has a crack in it and your 3-year-old has an apocalyptic meltdown over it at a restaurant with judgy people staring at you, whew! It definitely does not feel easy. In fact, it feels sweaty and exasperating. The thing is, I have been reminding myself that these little chaotic moments are small pieces to the larger puzzle of my daughter’s life. She is truly the apple of my eye, the tiniest little ball of joy and wit, and being her mother has been my greatest calling in life. Hence my 15,000 pictures of her in my iCloud. However, I would be remiss if I didn’t admit that this threenage era hasn’t been humbling and challenging. I have heard that we are given the children we get to help us become the best version of our own self. I can attest to the accuracy of that statement as my patience, endurance, and gentleness is most definitely being refined and tested through this threenage stage. A perk? At least she isn’t blaring Justin Bieber music from her bedroom quite yet. We’ll just have to wait for the true teenage years for that. Follow Tracy on her blog, littleparentontheprairie.com. She would love to hear from you!