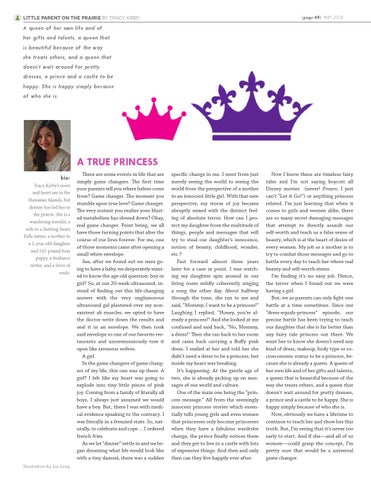 A queen of her own life and of her gifts and talents, a queen that is beautiful because of the way she treats others, and a queen that doesn’t wait around for pretty dresses, a prince and a castle to be happy. She is happy simply because of who she is.

A TRUE PRINCESS bio: Tracy Kirby’s roots and heart are in the Hawaiian Islands, but destiny has led her to the prairie. She is a wandering traveler, a wife to a dashing Sioux Falls native, a mother to a 2-year-old daughter and 145-pound bear puppy, a freelance writer, and a lover of souls.

There are some events in life that are simply game changers. The first time your parents tell you where babies come from? Game changer. The moment you stumble upon true love? Game changer. The very instant you realize your blasted metabolism has slowed down? Okay, real game changer. Point being, we all have those turning points that alter the course of our lives forever. For me, one of those moments came after opening a small white envelope. See, after we found out we were going to have a baby, we desperately wanted to know the age-old question: boy or girl? So, at our 20-week ultrasound, instead of finding out this life-changing answer with the very unglamorous ultrasound gel plastered over my nonexistent ab muscles, we opted to have the doctor write down the results and seal it in an envelope. We then took said envelope to one of our favorite restaurants and unceremoniously tore it open like ravenous wolves. A girl. In the game changers of game changers of my life, this one was up there. A girl? I felt like my heart was going to explode into tiny little pieces of pink joy. Coming from a family of literally all boys, I always just assumed we would have a boy. But, there I was with medical evidence speaking to the contrary. I was literally in a frenzied state. So, naturally, to celebrate and cope ... I ordered french fries. As we let “dinner” settle in and we began dreaming what life would look like with a tiny damsel, there was a sudden

specific change in me. I went from just merely seeing the world to seeing the world from the perspective of a mother to an innocent little girl. With that new perspective, my storm of joy became abruptly mixed with the distinct feeling of absolute terror. How can I protect my daughter from the multitude of things, people and messages that will try to steal our daughter’s innocence, notion of beauty, childhood, wonder, etc.? Fast forward almost three years later for a case in point. I was watching my daughter spin around in our living room mildly coherently singing a song the other day. About halfway through the tune, she ran to me and said, “Mommy, I want to be a princess!” Laughing I replied, “Honey, you’re already a princess!” And she looked at me confused and said back, “No, Mommy, a dress!” Then she ran back to her room and came back carrying a fluffy pink dress. I smiled at her and told her she didn’t need a dress to be a princess, but inside my heart was breaking. It’s happening. At the gentle age of two, she is already picking up on messages of our world and culture. One of the main one being the “princess message.” All from the seemingly innocent princess stories which essentially tells young girls and even women that princesses only become princesses when they have a fabulous wardrobe change, the prince finally notices them and they get to live in a castle with lots of expensive things. And then and only then can they live happily ever after.

Now I know these are timeless fairy tales and I’m not saying boycott all Disney movies (never! Frozen; I just can’t “Let it Go!”) or anything princess related. I’m just learning that when it comes to girls and women alike, there are so many secret damaging messages that attempt to directly assault our self-worth and teach us a false sense of beauty, which is at the heart of desire of every women. My job as a mother is to try to combat those messages and go to battle every day to teach her where real beauty and self-worth stems. I’m finding it’s no easy job. Hence, the terror when I found out we were having a girl. But, we as parents can only fight one battle at a time sometimes. Since our “dress-equals-princess” episode, our precise battle has been trying to teach our daughter that she is far better than any fairy tale princess out there. We want her to know she doesn’t need any kind of dress, makeup, body type or socioeconomic status to be a princess, because she is already a queen. A queen of her own life and of her gifts and talents, a queen that is beautiful because of the way she treats others, and a queen that doesn’t wait around for pretty dresses, a prince and a castle to be happy. She is happy simply because of who she is. Now, obviously we have a lifetime to continue to teach her and show her this truth. But, I’m seeing that it’s never too early to start. And if she—and all of us women—could grasp the concept, I’m pretty sure that would be a universal game changer.