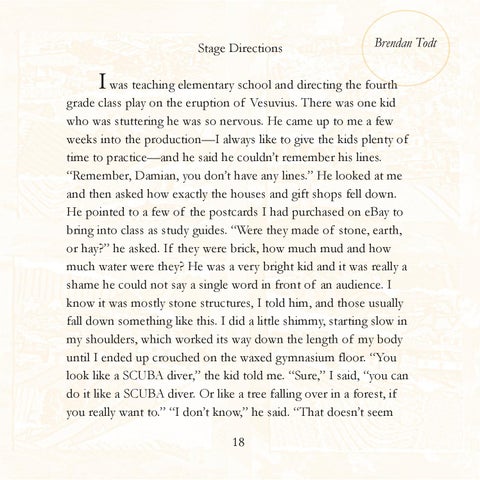 I was teaching elementary school and directing the fourth

grade class play on the eruption of Vesuvius. There was one kid who was stuttering he was so nervous. He came up to me a few weeks into the production—I always like to give the kids plenty of time to practice—and he said he couldn’t remember his lines. “Remember, Damian, you don’t have any lines.” He looked at me and then asked how exactly the houses and gift shops fell down. He pointed to a few of the postcards I had purchased on eBay to bring into class as study guides. “Were they made of stone, earth, or hay?” he asked. If they were brick, how much mud and how much water were they? He was a very bright kid and it was really a shame he could not say a single word in front of an audience. I know it was mostly stone structures, I told him, and those usually fall down something like this. I did a little shimmy, starting slow in my shoulders, which worked its way down the length of my body until I ended up crouched on the waxed gymnasium floor. “You look like a SCUBA diver,” the kid told me. “Sure,” I said, “you can do it like a SCUBA diver. Or like a tree falling over in a forest, if you really want to.” “I don’t know,” he said. “That doesn’t seem 18 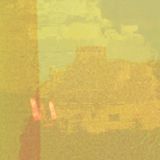