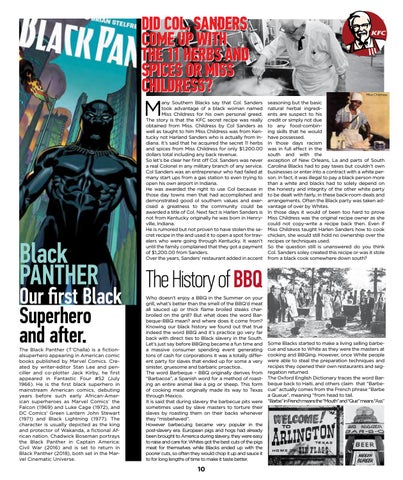 DID COL. SANDERS COME UP WITH THE 11 HERBS AND SPICES OR MISS CHILDRESS?

any Southern Blacks say that Col. Sanders took advantage of a black woman named Miss Childress for his own personal greed. The story is that the KFC secret recipe was really obtained from Miss. Childress by Col Sanders as well as taught to him Miss Childress was from Kentucky not Harland Sanders who is actually from Indiana. It’s said that he acquired the secret 11 herbs and spices from Miss Childress for only $1,200.00 dollars total including any back revenue. So let’s be clear her first off Col. Sanders was never a real Colonel in any military branch of any service. Col Sanders was an entrepreneur who had failed at many start ups from a gas station to even trying to open his own airport in Indiana. He was awarded the right to use Col because in those day towns men that had accomplished and demonstrated good ol southern values and exercised a greatness to the community could be awarded a title of Col. Next fact is Harlen Sanders is not from Kentucky originally he was born in Henryville, Indiana. He is rumored but not proven to have stolen the secret recipe in the and used it to open a spot for travelers who were going through Kentucky. It wasn’t until the family complained that they got a payment of $1,200.00 from Sanders. Over the years, Sanders’ restaurant added in accent

The History of BBQ

The Black Panther (T’Challa) is a fictionalsuperhero appearing in American comic books published by Marvel Comics. Created by writer-editor Stan Lee and penciller and co-plotter Jack Kirby, he first appeared in Fantastic Four #52 (July 1966). He is the first black superhero in mainstream American comics, debuting years before such early African-American superheroes as Marvel Comics’ the Falcon (1969) and Luke Cage (1972), and DC Comics’ Green Lantern John Stewart (1971) and Black Lightning (1977). The character is usually depicted as the king and protector of Wakanda, a fictional African nation. Chadwick Boseman portrays the Black Panther in Captain America: Civil War (2016) and is set to return in Black Panther (2018), both set in the Marvel Cinematic Universe.

Who doesn’t enjoy a BBQ in the Summer on your grill, what’s better than the smell of the BBQ’d meat all sauced up or thick flame broiled steaks charbroiled on the grill? But what does the word Barbeque-BBQ mean? and where does it come from? Knowing our black history we found out that true indeed the word BBQ and it’s practice go very far back with direct ties to Black slavery in the South. Let’s just say before BBQing became a fun time and a massive consumer spending event generating tons of cash for corporations it was a totally different party for slaves that ended up for some a very sinister, gruesome and barbaric proactice.. The word Barbeque – BBQ originally derives from “Barbacoa”, a Spanish word for a method of roasting an entire animal like a pig or sheep. This form of cooking meat originally made its way to Texas through Mexico. It is said that during slavery the barbecue pits were sometimes used by slave masters to torture their slaves by roasting them on their backs whenever they “misbehaved”. However barbecuing became very popular in the post-slavery era. European pigs and hogs had already been brought to America during slavery, they were easy to raise and care for. Whites got the best cuts of the pigs meat for themselves while Blacks ended up with the poorer cuts, so often they would chop it up and sauce it to for long lengths of time to make it taste better.

Our first Black Superhero and after.

seasoning but the basic natural herbal ingredients are suspect to his credit or simply not due to any food-combining skills that he would have possessed. In those days racism was in full effect in the south and with the exception of New Orleans, La and parts of South Carolina Blacks had to pay taxes but couldn’t own businesses or enter into a contract with a white person. In fact, it was illegal to pay a black person more than a white and blacks had to solely depend on the honesty and integrity of the other white party to be dealt with fairly, in these back-room deals and arrangements. Often the Black party was taken advantage of over by Whites. In those days it would of been too hard to prove Miss Childress was the original recipe owner as she could not copy-write a recipe back then. Even if Miss Childress taught Harlen Sanders how to cook chicken, she would still hold no ownership over the recipes or techniques used. So the question still is unanswered do you think Col. Sanders soley created this recipe or was it stole from a black cook somewhere down south?

Some Blacks started to make a living selling barbecue and sauce to White as they were the masters at cooking and BBQing. However, once White people were able to steal the preparation techniques and recipes they opened their own restaurants and segregation returned. The Oxford English Dictionary traces the word Barbeque back to Haiti, and others claim that “Barbecue” actually comes from the French phrase “Barbe a Queue”, meaning “from head to tail. “Barbe” in French means the “Mouth” and “Que” means “Ass”

Second year round of 2017, 4AM NEWS dedicates this issue to the Black History Month Enjoy your free read 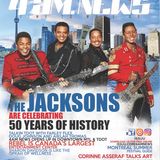