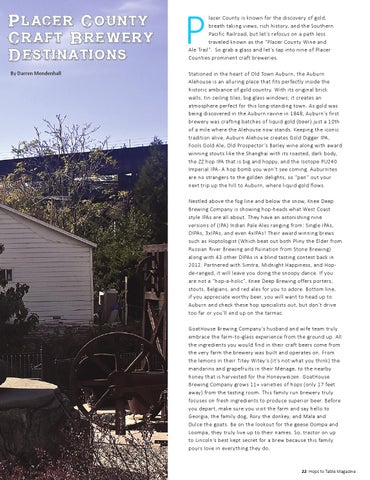 lacer County is known for the discovery of gold, breath taking views, rich history, and the Southern Pacific Railroad, but let’s refocus on a path less traveled known as the “Placer County Wine and Ale Trail”. So grab a glass and let’s tap into nine of Placer Counties prominent craft breweries. Stationed in the heart of Old Town Auburn, the Auburn Alehouse is an alluring place that fits perfectly inside the historic ambiance of gold country. With its original brick walls, tin ceiling tiles, big glass windows; it creates an atmosphere perfect for this long-standing town. As gold was being discovered in the Auburn ravine in 1848, Auburn’s first brewery was crafting batches of liquid gold (beer) just a 10th of a mile where the Alehouse now stands. Keeping the iconic tradition alive, Auburn Alehouse creates Gold Digger IPA, Fools Gold Ale, Old Prospector’s Barley wine along with award winning stouts like the Shanghai with its roasted, dark body, the ZZ hop IPA that is big and hoppy, and the Isotope PU240 Imperial IPA- A hop bomb you won’t see coming. Auburnites are no strangers to the golden delights, so “pan” out your next trip up the hill to Auburn, where liquid gold flows. Nestled above the fog line and below the snow, Knee Deep Brewing Company is showing hop-heads what West Coast style IPAs are all about. They have an astonishing nine versions of (IPA) Indian Pale Ales ranging from: Single IPAs, DIPAs, 3xIPAs, and even 4xIPAs! Their award winning brews such as Hoptologist (Which beat out both Pliny the Elder from Russian River Brewing and Ruination from Stone Brewing) along with 43 other DIPAs in a blind tasting contest back in 2012. Partnered with Simtra, Midnight Happiness, and Hopde-ranged, it will leave you doing the snoopy dance. If you are not a “hop-a-holic”, Knee Deep Brewing offers porters, stouts, Belgians, and red ales for you to adore. Bottom line, if you appreciate worthy beer, you will want to head up to Auburn and check these hop specialists out, but don’t drive too far or you’ll end up on the tarmac. GoatHouse Brewing Company’s husband and wife team truly embrace the farm-to-glass experience from the ground up. All the ingredients you would find in their craft beers come from the very farm the brewery was built and operates on. From the lemons in their Titey Witey’s (it’s not what you think) the mandarins and grapefruits in their Ménage, to the nearby honey that is harvested for the Honeyweizen. GoatHouse Brewing Company grows 11+ varieties of hops (only 17 feet away) from the tasting room. This family run brewery truly focuses on fresh ingredients to produce superior beer. Before you depart, make sure you visit the farm and say hello to Georgia, the family dog, Rory the donkey, and Mala and Dulce the goats. Be on the lookout for the geese Oompa and Loompa, they truly live up to their names. So, tractor on up to Lincoln’s best kept secret for a brew because this family pours love in everything they do. 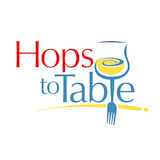