THIS IS MUSIC BY 44 DEGREES ART MAGAZINE 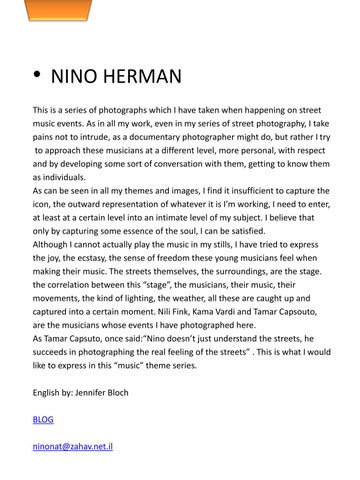 • ‫‏‬NINO HERMAN This is a series of photographs which I have taken when happening on street music events. As in all my work, even in my series of street photography, I take pains not to intrude, as a documentary photographer might do, but rather I try to approach these musicians at a different level, more personal, with respect and by developing some sort of conversation with them, getting to know them as individuals. As can be seen in all my themes and images, I find it insufficient to capture the icon, the outward representation of whatever it is I’m working, I need to enter, at least at a certain level into an intimate level of my subject. I believe that only by capturing some essence of the soul, I can be satisfied. Although I cannot actually play the music in my stills, I have tried to express the joy, the ecstasy, the sense of freedom these young musicians feel when making their music. The streets themselves, the surroundings, are the stage. the correlation between this “stage”, the musicians, their music, their movements, the kind of lighting, the weather, all these are caught up and captured into a certain moment. Nili Fink, Kama Vardi and Tamar Capsouto, are the musicians whose events I have photographed here. As Tamar Capsuto, once said:“Nino doesn’t just understand the streets, he succeeds in photographing the real feeling of the streets” . This is what I would like to express in this “music” theme series.

THIS IS MUSIC BY 44 DEGREES ART MAGAZINE

The new issue – 'THIS IS MUSIC' of the online art magazine 44 DEGREES and it free to view. The online art magazine 44 DEGREES presents, an impressive body of work of contemporary art in various fields and dedicated to promoting Israeli artists. You can make direct contact with the artist by clicking on his e-mail address. You are welcome to the magazine link: http://www.44degrees.net For more news, press LIKE, in the magazine's Facebook page https://www.facebook.com/44DegreesMagazine 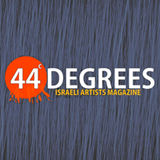