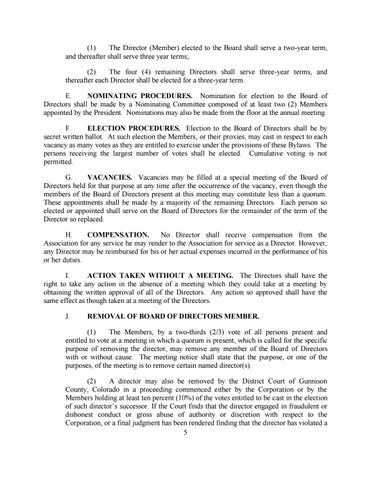 (1) The Director (Member) elected to the Board shall serve a two-year term, and thereafter shall serve three year terms; (2) The four (4) remaining Directors shall serve three-year terms, and thereafter each Director shall be elected for a three-year term. E. NOMINATING PROCEDURES. Nomination for election to the Board of Directors shall be made by a Nominating Committee composed of at least two (2) Members appointed by the President. Nominations may also be made from the floor at the annual meeting. F. ELECTION PROCEDURES. Election to the Board of Directors shall be by secret written ballot. At such election the Members, or their proxies, may cast in respect to each vacancy as many votes as they are entitled to exercise under the provisions of these Bylaws. The persons receiving the largest number of votes shall be elected. Cumulative voting is not permitted. G. VACANCIES. Vacancies may be filled at a special meeting of the Board of Directors held for that purpose at any time after the occurrence of the vacancy, even though the members of the Board of Directors present at this meeting may constitute less than a quorum. These appointments shall be made by a majority of the remaining Directors. Each person so elected or appointed shall serve on the Board of Directors for the remainder of the term of the Director so replaced. H. COMPENSATION. No Director shall receive compensation from the Association for any service he may render to the Association for service as a Director. However, any Director may be reimbursed for his or her actual expenses incurred in the performance of his or her duties. I. ACTION TAKEN WITHOUT A MEETING. The Directors shall have the right to take any action in the absence of a meeting which they could take at a meeting by obtaining the written approval of all of the Directors. Any action so approved shall have the same effect as though taken at a meeting of the Directors. J.

REMOVAL OF BOARD OF DIRECTORS MEMBER.

(1) The Members, by a two-thirds (2/3) vote of all persons present and entitled to vote at a meeting in which a quorum is present, which is called for the specific purpose of removing the director, may remove any member of the Board of Directors with or without cause. The meeting notice shall state that the purpose, or one of the purposes, of the meeting is to remove certain named director(s). (2) A director may also be removed by the District Court of Gunnison County, Colorado in a proceeding commenced either by the Corporation or by the Members holding at least ten percent (10%) of the votes entitled to be cast in the election of such directorâ&#x20AC;&#x2122;s successor. If the Court finds that the director engaged in fraudulent or dishonest conduct or gross abuse of authority or discretion with respect to the Corporation, or a final judgment has been rendered finding that the director has violated a 5