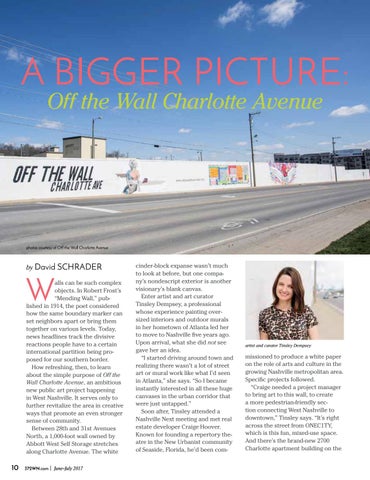 A BIGGER PICTURE: Off the Wall Charlotte Avenue

photos courtesy of Off the Wall Charlotte Avenue

alls can be such complex objects. In Robert Frost’s “Mending Wall,” published in 1914, the poet considered how the same boundary marker can set neighbors apart or bring them together on various levels. Today, news headlines track the divisive reactions people have to a certain international partition being proposed for our southern border. How refreshing, then, to learn about the simple purpose of Off the Wall Charlotte Avenue, an ambitious new public art project happening in West Nashville. It serves only to further revitalize the area in creative ways that promote an even stronger sense of community. Between 28th and 31st Avenues North, a 1,000-foot wall owned by Abbott West Self Storage stretches along Charlotte Avenue. The white

cinder-block expanse wasn’t much to look at before, but one company’s nondescript exterior is another visionary’s blank canvas. Enter artist and art curator Tinsley Dempsey, a professional whose experience painting oversized interiors and outdoor murals in her hometown of Atlanta led her to move to Nashville five years ago. Upon arrival, what she did not see gave her an idea. “I started driving around town and realizing there wasn’t a lot of street art or mural work like what I’d seen in Atlanta,” she says. “So I became instantly interested in all these huge canvases in the urban corridor that were just untapped.” Soon after, Tinsley attended a Nashville Next meeting and met real estate developer Craige Hoover. Known for founding a repertory theatre in the New Urbanist community of Seaside, Florida, he’d been com-

missioned to produce a white paper on the role of arts and culture in the growing Nashville metropolitan area. Specific projects followed. “Craige needed a project manager to bring art to this wall, to create a more pedestrian-friendly section connecting West Nashville to downtown,” Tinsley says. “It’s right across the street from ONEC1TY, which is this fun, mixed-use space. And there’s the brand-new 2700 Charlotte apartment building on the