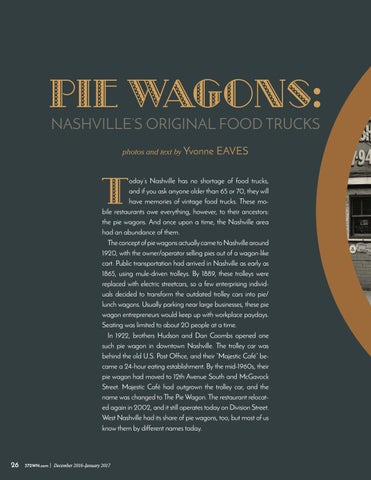 oday’s Nashville has no shortage of food trucks, and if you ask anyone older than 65 or 70, they will have memories of vintage food trucks. These mobile restaurants owe everything, however, to their ancestors: the pie wagons. And once upon a time, the Nashville area had an abundance of them. The concept of pie wagons actually came to Nashville around 1920, with the owner/operator selling pies out of a wagon-like cart. Public transportation had arrived in Nashville as early as 1865, using mule-driven trolleys. By 1889, these trolleys were replaced with electric streetcars, so a few enterprising individuals decided to transform the outdated trolley cars into pie/ lunch wagons. Usually parking near large businesses, these pie wagon entrepreneurs would keep up with workplace paydays. Seating was limited to about 20 people at a time. In 1922, brothers Hudson and Dan Coombs opened one such pie wagon in downtown Nashville. The trolley car was behind the old U.S. Post Office, and their “Majestic Café” became a 24-hour eating establishment. By the mid-1960s, their pie wagon had moved to 12th Avenue South and McGavock Street. Majestic Café had outgrown the trolley car, and the name was changed to The Pie Wagon. The restaurant relocated again in 2002, and it still operates today on Division Street. West Nashville had its share of pie wagons, too, but most of us know them by different names today.