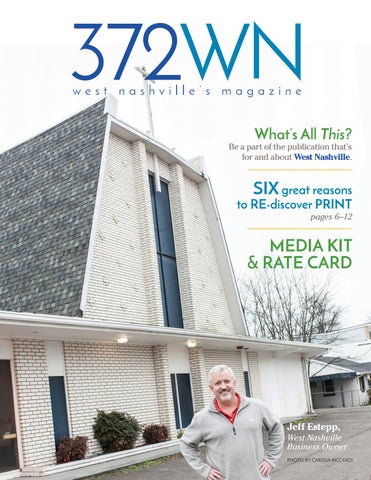 Be a part of the publication that’s for and about West Nashville.

A SOURCE THAT: • Preserves and protects the history. • Explores growth, progress and development. • Combines objectivity with passion. • Keeps all residents informed. • Is written, photographed and designed exclusively by West Nashvillians. • Builds community by building a community, because it . . . CELEBRATES AND CHAMPIONS WEST NASHVILLE.

A magazine for and about West Nashville.

PART OF SOMETHING THIS COMMUNITY HAS NEEDED FOR A LONG TIME.

A news source that transcends individual forms of media to deliver stories affecting our neighborhoods. the magazine with the odd name, is West Nashvilleâ&#x20AC;&#x2122;s magazine. Each issue is packed with informative, interesting features that cover current happenings; historical facts and anecdotal memories; business and SHRSOH SURČ´OHV DQG Č&#x2020;DUWHU\Č&#x2021; QHZV IURP :HVW (QG &KDUORWWH DQG Centennial. And with new neighbors moving into our community at UDSLGČ´UHSDFH\RXČ&#x2021;OODOVRČ´QGTXLFNUHIHUHQFHJXLGHVWKDWDQVZHU WKRVHČ&#x160;KRZGRÎ&#x2013;"Č&#x2039;DQGČ&#x160;ZKHQGRÎ&#x2013;"Č&#x2039;VRUWVRITXHVWLRQV

WHY NOT JUST DO THIS ONLINE? At press time: Among residents in West Nashvilleâ&#x20AC;&#x2122;s coreâ&#x20AC;&#x201D;Sylvan Heights, Sylvan Park, The Nations, Charlotte Park, Robertson, and White Bridgeâ&#x20AC;&#x201D; only 18% are members of Nextdoor. That number decreases to 11% when surrounding West Nashville neighborhoods are factored in. Over a dozen Facebook pages exist on behalf of these

same neighborhoods. Proportionately speaking, none of these has emerged as a centralized source of West Nashville news, much less reached the majority of West Nashvillians. By and large, West Nashville remains a print community; we recognize, however, the need to provide news via multiple platforms. After all, this is about reaching our entire community, right? So it is essential to make 372WN accessible, no matter how you receive your newsâ&#x20AC;&#x201D;print, web, social media, and maybe someday . . . even broadcast (as they say in the biz, â&#x20AC;&#x2DC;stay tuned.â&#x20AC;&#x2122;).

ARE YOU JUST THE MOUTHPIECE FOR NEIGHBORHOOD ASSOCIATIONS, DEVELOPERS OR ELECTED OFFICIALS? We are not chasing scandals, but nor will we shy away from issues that affect West Nashville, directly or indirectly. To this end, it is our policy that our editorial department is not beholden to any elected official, advertiser, neighborhood association or individual. Certainly, we are willing to work with these entities (and want to), but we are under no obligation to them.

he November 2015 Nations Neighborhood Association’s meeting started out like any other, with then-president Frankie Stabile working through that month’s agenda. When it was time to discuss new business, a mild-mannered gentleman stood and introduced himself: “My name is Jeff Estepp, and I recently purchased the old church at 4909 Indiana Avenue.” While a few neighbors in attendance knew Estepp personally, many more knew him by his occupation: He was a developer. Another developer. There was nothing unusual about developers attending these meetings; Estepp attending one, however, was a different matter. He had a reputation for being reasonable, didn’t carry the baggage that many developers and builders in the area carried from one job to the next. But nor did Estepp attend neighborhood meetings; something was up. “Right now, I have two options with the current zoning,” he continued. “I could leave it as a church, or I can tear it down and build six houses.” At that point, neighbors started

glancing at each other, knowing what was coming next. “What I want to do is renovate the building, and I’ve come to you, the neighborhood, for ideas on what to do with it.” For a nanosecond, you could have heard a pin drop; murmurs turned to excited stage whispers. No, this wasn’t what they expected to come next. “So I’m asking for your ideas and dreams about what this neighborhood needs and wants,” Estepp said. “What could we do with this property? That’s all I had to say.” Sitting down, he encouraged people to speak with him after the meeting or contact him in the days following.

for over a decade, Estepp recently relocated his office deeper into The Nations neighborhood, just down the street in the building that once occupied West Meade Decorating Company; he is no stranger to West Nashville, having spent his childhood in Sylvan Park and returning to it as a resident for more than twenty years. Looking across Charlotte Avenue, he saw a neighborhood worth preserving and improving. “I was the second builder to build a new home in The Nations since probably 1970,” he explains. “I’ve got a lot of time, effort, and money invested in this neighborhood—honestly, I think more so than any other developer or builder in this area [The Nations neighborhood].” In a climate where developers are begging people to sell their homes, it’s interesting to note that Estepp

“retrofitting just one percent of the city’s office buildings and single family homes . . . would help to meet 15 percent of the entire county’s total CO2 reduction targets.”

Local Boy Does Good? Having been a fixture on 51st Avenue

D ; +Ĺ&#x201A;1Ă&#x160;Ĺ&#x201A; That could be good news for the neighborhood and the environment. According to â&#x20AC;&#x153;The Greenest Building: Quantifying the Environmental Value of Building Reuse,â&#x20AC;? published by The National Trust for Historic Preservationâ&#x20AC;&#x2122;s Green Lab in 2012, even if a new building is energy efficient, the negative environmental affects of construction outweigh

the positive gains. The report states that, â&#x20AC;&#x153;it can take 10 to 80 years for a new energy efficient building to compensate, through efficient operations, for the climate change impacts created by its construction.â&#x20AC;? The study offers a startling example out of Portland, Oregon, where they determined that â&#x20AC;&#x153;retrofitting just one percent of the cityâ&#x20AC;&#x2122;s office buildings and single family

homes that would otherwise be demolished and rebuilt over the

next ten years would help to meet 15 percent of the entire countyâ&#x20AC;&#x2122;s total CO2 reduction targets.â&#x20AC;? When you consider how much demolition and new construction is taking place in The Nations, West Nashville, and Nashville as a whole, those findings should take on a whole new level of concern. Under the existing zoning, however, Esteppâ&#x20AC;&#x2122;s options were quite limited. He could have left the building as a church; he could have demolished the building and built up to six

The Codes Consideration Ideas were flowing and being debated among neighborsâ&#x20AC;&#x201D;which was what Estepp had requestedâ&#x20AC;&#x201D; without considering the zoning codes themselves. â&#x20AC;&#x153;It seemed like there was some neighborhood consensus building to put some sort of large grocery store in

WHAT COULD BE: 4909 Indiana Avenue, rendering by Austin Schulenburg, Pen & Mug Graphic Design.

move for the neighborhood,â&#x20AC;? he explains. â&#x20AC;&#x153;Commercial zoning opens up the possibility that anything could go in there: a used tired store to a massage parlor. I donâ&#x20AC;&#x2122;t think that would work.â&#x20AC;? When asked about a Specific Plan (SP), which seems to be a popular tool for neighborhoods that want an active voice in new construction,

A Landmark Decision Estepp got to work immediately, attending a couple of monthly neighborhood meetings and purposefully seeking residents in the immediate area who would be affected most by these decisions. One neighbor was Bradley, who welcomed the conversations. â&#x20AC;&#x153;After talking to him, it sounded like he preferred to keep the building and secure a landmark overlay,â&#x20AC;? says Bradley. â&#x20AC;&#x153;That way, weâ&#x20AC;&#x2122;d keep the building but loosen up the use, with some restrictions. I think thatâ&#x20AC;&#x2122;s a good idea, if he can make it work.â&#x20AC;? Bradley and Estepp walked through the property itself, discussing some of the improvements Estepp envisioned. â&#x20AC;&#x153;He talked about opening it up to get more light in there, improving some of the materials,â&#x20AC;? says Bradley. â&#x20AC;&#x153;From everything I can tell, he seems to be trying to do something thatâ&#x20AC;&#x2122;s good and would work well with the neighborhood

give them two opportunities to meet about this.â&#x20AC;?

diversity and change is happening so quickly,â&#x20AC;? she explains. â&#x20AC;&#x153;We have to be proactive, and I plan to move forward having all developers speak to the neighborhood before they go to Planning.â&#x20AC;?

Residents still have every right to be skeptical of Esteppâ&#x20AC;&#x2122;s intentions, however. Part of what has landed West Nashville into a lightning rod of development woes are lack of transparency, lack of communication, and outright lies theyâ&#x20AC;&#x2122;ve been told by builders and â&#x20AC;&#x153;millionaire-on-paperâ&#x20AC;? type of builders beholden to investors who donâ&#x20AC;&#x2122;t want their names attached to whatâ&#x20AC;&#x2122;s coming, but do want to collect the paycheck it will yield. In addition, the lack of communication from neighborhood leaders has often Blurry, Barely-there Lines resulted in fractured information and silos of division. Estepp understands Discussing community development the suspicion, and encourages neighon a broader scale, one of the most bors to make every effort to shift common issues that raise residentsâ&#x20AC;&#x2122; from reactive to proactive mode. â&#x20AC;&#x153;I collective blood pressure is a builderâ&#x20AC;&#x2122;s think so many people just donâ&#x20AC;&#x2122;t have time to get involved; [4] they want to get involved, they voice their opinions when the outcome isnâ&#x20AC;&#x2122;t something they desired,â&#x20AC;? he explains. â&#x20AC;&#x153;I think we need more advertisAs long as your products and ing of community meetings $ " $Ă&#x2030; Ă&#x160;$&Ă&#x160; ( Ă&#x2030; instead of just social media. Ă&#x160; Ă&#x2030;Ă&#x2021;Ă&#x2030;*Ă&#x160;Y$$ $  $ There are so . . specialty publications offer many people who need a you a dedicated market. mailer or a flyer stuck on their SOURCE: â&#x20AC;&#x153;Top Five Benefits of Print Advertising door; there are in Niche Magazines,â&#x20AC;? HCP Aboard Publishing, May 29th, 2014 so many who arenâ&#x20AC;&#x2122;t members of Next Door or Facebook,

WHY WEST is BEST

His outlookâ&#x20AC;&#x201D;primarily for Sylvan Park, Sylvan Heights, The Nations, and Charlotte Park, which contain most of his interestsâ&#x20AC;&#x201D;remains optimistic. â&#x20AC;&#x153;My vision for West Nashville is to keep improving, especially the residential spaces and cleaning up the neighborhood,â&#x20AC;? he explains. â&#x20AC;&#x153;That doesnâ&#x20AC;&#x2122;t necessarily mean tearing down every house thatâ&#x20AC;&#x2122;s fifty years or older, either. There are plenty that Iâ&#x20AC;&#x2122;ve remodeled. West Nashville is a broad canvas. I want to do as much as I can to support commercial development on 51st . . . I think that Charlotte Pike needs to be cleaned up. Property owners have a right to do whatâ&#x20AC;&#x2122;s allowed, but I think there are a lot of older structures that either need to go away or repair, if they could. I plan on retiring here, I plan to stay here until Iâ&#x20AC;&#x2122;m done and want to do what I can for this area. To make it better and moving forward instead of stalling out.â&#x20AC;? While the final outcome of 4909 Indiana remains to be seen, transparency and true neighborhood input is a great first step. IN

All online ads will link to advertiserโs site. Media kit for the magazine for and about West Nashville. Get a feel for what we're about, learn why print still matters, and look at ad form...

Media kit for the magazine for and about West Nashville. Get a feel for what we're about, learn why print still matters, and look at ad form...