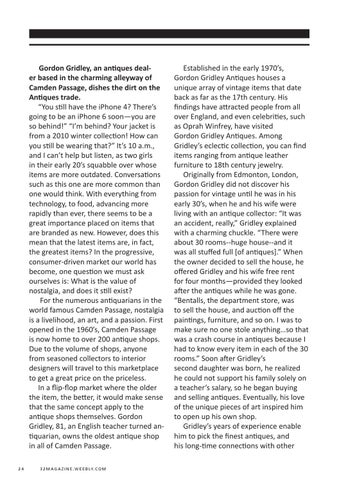 Gordon Gridley, an antiques dealer based in the charming alleyway of Camden Passage, dishes the dirt on the Antiques trade. “You still have the iPhone 4? There’s going to be an iPhone 6 soon—you are so behind!” “I’m behind? Your jacket is from a 2010 winter collection! How can you still be wearing that?” It’s 10 a.m., and I can’t help but listen, as two girls in their early 20’s squabble over whose items are more outdated. Conversations such as this one are more common than one would think. With everything from technology, to food, advancing more rapidly than ever, there seems to be a great importance placed on items that are branded as new. However, does this mean that the latest items are, in fact, the greatest items? In the progressive, consumer-driven market our world has become, one question we must ask ourselves is: What is the value of nostalgia, and does it still exist? For the numerous antiquarians in the world famous Camden Passage, nostalgia is a livelihood, an art, and a passion. First opened in the 1960’s, Camden Passage is now home to over 200 antique shops. Due to the volume of shops, anyone from seasoned collectors to interior designers will travel to this marketplace to get a great price on the priceless. In a flip-flop market where the older the item, the better, it would make sense that the same concept apply to the antique shops themselves. Gordon Gridley, 81, an English teacher turned antiquarian, owns the oldest antique shop in all of Camden Passage. 24

Established in the early 1970’s, Gordon Gridley Antiques houses a unique array of vintage items that date back as far as the 17th century. His findings have attracted people from all over England, and even celebrities, such as Oprah Winfrey, have visited Gordon Gridley Antiques. Among Gridley’s eclectic collection, you can find items ranging from antique leather furniture to 18th century jewelry. Originally from Edmonton, London, Gordon Gridley did not discover his passion for vintage until he was in his early 30’s, when he and his wife were living with an antique collector: “It was an accident, really,” Gridley explained with a charming chuckle. “There were about 30 rooms--huge house--and it was all stuffed full [of antiques].” When the owner decided to sell the house, he offered Gridley and his wife free rent for four months—provided they looked after the antiques while he was gone. “Bentalls, the department store, was to sell the house, and auction off the paintings, furniture, and so on. I was to make sure no one stole anything…so that was a crash course in antiques because I had to know every item in each of the 30 rooms.” Soon after Gridley’s second daughter was born, he realized he could not support his family solely on a teacher’s salary, so he began buying and selling antiques. Eventually, his love of the unique pieces of art inspired him to open up his own shop. Gridley’s years of experience enable him to pick the finest antiques, and his long-time connections with other

A monthly community and lifestyle magazine celebrating one of London's 32 boroughs every month.