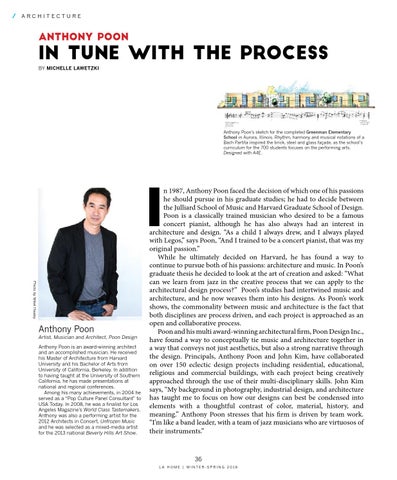 IN TUNE WITH THE PROCESS BY MICHELLE LAWETZKI

Anthony Poon’s sketch for the completed Greenman Elementary School in Aurora, Illinois. Rhythm, harmony and musical notations of a Bach Partita inspired the brick, steel and glass façade, as the school’s curriculum for the 700 students focuses on the performing arts. Designed with A4E.

I Photo by Mikel Healey

Anthony Poon Artist, Musician and Architect, Poon Design Anthony Poon is an award-winning architect and an accomplished musician. He received his Master of Architecture from Harvard University and his Bachelor of Arts from University of California, Berkeley. In addition to having taught at the University of Southern California, he has made presentations at national and regional conferences. Among his many achievements, in 2004 he served as a “Pop Culture Panel Consultant” to USA Today. In 2008, he was a finalist for Los Angeles Magazine’s World Class Tastemakers. Anthony was also a performing artist for the 2012 Architects in Concert, Unfrozen Music and he was selected as a mixed-media artist for the 2013 national Beverly Hills Art Show.

n 1987, Anthony Poon faced the decision of which one of his passions he should pursue in his graduate studies; he had to decide between the Julliard School of Music and Harvard Graduate School of Design. Poon is a classically trained musician who desired to be a famous concert pianist, although he has also always had an interest in architecture and design. “As a child I always drew, and I always played with Legos,” says Poon, “And I trained to be a concert pianist, that was my original passion.” While he ultimately decided on Harvard, he has found a way to continue to pursue both of his passions: architecture and music. In Poon’s graduate thesis he decided to look at the art of creation and asked: “What can we learn from jazz in the creative process that we can apply to the architectural design process?” Poon’s studies had intertwined music and architecture, and he now weaves them into his designs. As Poon’s work shows, the commonality between music and architecture is the fact that both disciplines are process driven, and each project is approached as an open and collaborative process. Poon and his multi award-winning architectural firm, Poon Design Inc., have found a way to conceptually tie music and architecture together in a way that conveys not just aesthetics, but also a strong narrative through the design. Principals, Anthony Poon and John Kim, have collaborated on over 150 eclectic design projects including residential, educational, religious and commercial buildings, with each project being creatively approached through the use of their multi-disciplinary skills. John Kim says, “My background in photography, industrial design, and architecture has taught me to focus on how our designs can best be condensed into elements with a thoughtful contrast of color, material, history, and meaning.” Anthony Poon stresses that his firm is driven by team work. “I’m like a band leader, with a team of jazz musicians who are virtuosos of their instruments.” 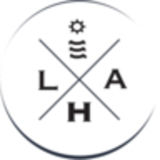