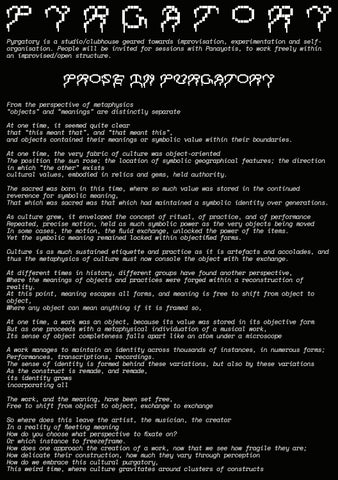 Pyrgatory is a studio/clubhouse geared towards improvisation, experimentation and selforganisation. People will be invited for sessions with Panayotis, to work freely within an improvised/open structure.

From the perspective of metaphysics “objects” and “meanings” are distinctly separate At one time, it seemed quite clear that “this meant that”, and “that meant this”, and objects contained their meanings or symbolic value within their boundaries. At one time, the very fabric of culture was object-oriented The position the sun rose; the location of symbolic geographical features; the direction in which “the other” exists cultural values, embodied in relics and gems, held authority. The sacred was born in this time, where so much value was stored in the continued reverence for symbolic meaning, That which was sacred was that which had maintained a symbolic identity over generations. As culture grew, it enveloped the concept of ritual, of practice, and of performance Repeated, precise motion, held as much symbolic power as the very objects being moved In some cases, the motion, the fluid exchange, unlocked the power of the items. Yet the symbolic meaning remained locked within objectified forms. Culture is as much sustained etiquette and practice as it is artefacts and accolades, and thus the metaphysics of culture must now console the object with the exchange. At different times in history, different groups have found another perspective, Where the meanings of objects and practices were forged within a reconstruction of reality. At this point, meaning escapes all forms, and meaning is free to shift from object to object, Where any object can mean anything if it is framed so, At one time, a work was an object, because its value was stored in its objective form But as one proceeds with a metaphysical individuation of a musical work, Its sense of object completeness falls apart like an atom under a microscope A work manages to maintain an identity across thousands of instances, in numerous forms; Performances, transcriptions, recordings. The sense of identity is formed behind these variations, but also by these variations As the construct is remade, and remade, its identity grows incorporating all The work, and the meaning, have been set free, Free to shift from object to object, exchange to exchange So where does this leave the artist, the musician, the creator In a reality of fleeting meaning How do you choose what perspective to fixate on? Or which instance to freezeframe. How does one approach the creation of a work, now that we see how fragile they are; How delicate their construction, how much they vary through perception How do we embrace this cultural purgatory, This weird time, where culture gravitates around clusters of constructs

Clusters of cultural monuments, maintained like guiding lights, from fear of what reality we would be left in, if those lights went out.

We improvise. We glide on these new currents, and be sincere in our reflections We use what we now know, to continue pushing further We create works that are conscious of the fragility of their existence, We seek to explore how our art could embrace, And play with its formlessness. Work that responds to the very listener, work that evolves from within itself Works which donâ&amp;#x20AC;&amp;#x2122;t try to be works, but surrender themselves to the infinite chain of action Which we know drives our culture And accept that only so much control can be had in how that cultural artefact, partobject, part-exchange, is taken into the currents of culture and transformed Self-organising music Music which lives and breathes

This begins by deconstructing the object, the work, Which first begins by locating it, individuating it.

While we once thought that it was the object, like the work of art, or spiritual artefact, or ritualised performance, that contained the value within its boundaries, we were met with another perspective which came about and saw the value of the objects as defined by the continued social performance, The continued shared projection, the establishment of tradition. As with Duchampâ&amp;#x20AC;&amp;#x2122;s fountain, which is at once a urinal and a commentary on art, Even if one accepts this as a duality, where objects and meanings coexist with seemingly inseparable borders, it is no longer acceptable to think of meaning as consistent, and one must always account for the contextual framing, and how the artist positions the quasi-object within a chain of exchanges and actions. Where does this leave music? Is music an object or an exchange, or a hybrid of the two? A classical work may seem fixed, or embodied in the score but, yet exists primarily in the thousands of repetitions and reinterpretations over time, no two of which are the same. The work exists behind the score, behind the performances, in the territory of aesthetics, subjectivity and symbolism; within cultural purgatory. Text: Nick Herzverg Contact P Y R G A T O R Y: 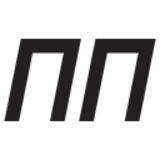