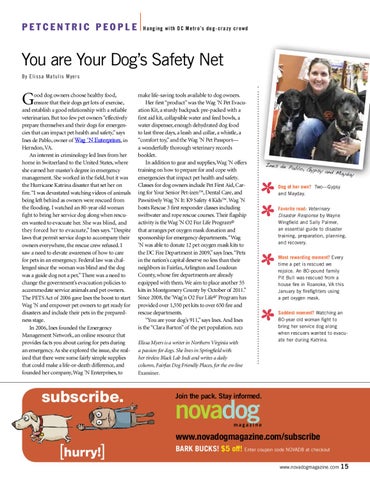 ood dog owners choose healthy food, ensure that their dogs get lots of exercise, and establish a good relationship with a reliable veterinarian. But too few pet owners “effectively prepare themselves and their dogs for emergencies that can impact pet health and safety,” says Ines de Pablo, owner of Wag ’N Enterprises, in Herndon, VA. An interest in criminology led Ines from her home in Switzerland to the United States, where she earned her master’s degree in emergency management. She worked in the field, but it was the Hurricane Katrina disaster that set her on fire. “I was devastated watching videos of animals being left behind as owners were rescued from the flooding. I watched an 80-year old woman fight to bring her service dog along when rescuers wanted to evacuate her. She was blind, and they forced her to evacuate,” Ines says. “Despite laws that permit service dogs to accompany their owners everywhere, the rescue crew refused. I saw a need to elevate awareness of how to care for pets in an emergency. Federal law was challenged since the woman was blind and the dog was a guide dog not a pet.” There was a need to change the government’s evacuation policies to accommodate service animals and pet owners. The PETS Act of 2006 gave Ines the boost to start Wag ’N and empower pet owners to get ready for disasters and include their pets in the preparedness stage. In 2006, Ines founded the Emergency Management Network, an online resource that provides facts you about caring for pets during an emergency. As she explored the issue, she realized that there were some fairly simple supplies that could make a life-or-death difference, and founded her company, Wag ’N Enterprises, to

make life-saving tools available to dog owners. Her first “product” was the Wag ’N Pet Evacuation Kit, a sturdy backpack pre-packed with a first aid kit, collapsible water and feed bowls, a water dispenser, enough dehydrated dog food to last three days, a leash and collar, a whistle, a “comfort toy,” and the Wag ’N Pet Passport— a wonderfully thorough veterinary records booklet. In addition to gear and supplies, Wag ’N offers training on how to prepare for and cope with emergencies that impact pet health and safety. Classes for dog owners include Pet First Aid, Caring for Your Senior Pet-izen™, Dental Care, and Pawsitively Wag ’N It: K9 Safety 4 Kids™. Wag ’N hosts Rescue 3 first responder classes including swiftwater and rope rescue courses. Their flagship activity is the Wag ’N O2 Fur Life Program® that arranges pet oxygen mask donation and sponsorship for emergency departments. “Wag ’N was able to donate 12 pet oxygen mask kits to the DC Fire Department in 2009,” says Ines. “Pets in the nation’s capital deserve no less than their neighbors in Fairfax, Arlington and Loudoun County, whose fire departments are already equipped with them. We aim to place another 55 kits in Montgomery County by October of 2011.” Since 2008, the ‘Wag’n O2 Fur Life®’ Program has provided over 1,550 pet kits to over 650 fire and rescue departments. “You are your dog’s 911,” says Ines. And Ines is the “Clara Barton” of the pet population. ND Elissa Myers is a writer in Northern Virginia with a passion for dogs. She lives in Springfield with her tireless Black Lab Indi and writes a daily column, Fairfax Dog Friendly Places, for the on-line Examiner.

Ines de P ablo, Gyp sy and May day Dog of her own? Two—Gypsy and Mayday. Favorite read: Veterinary Disaster Response by Wayne Wingfield and Sally Palmer, an essential guide to disaster training, preparation, planning, and recovery. Most rewarding moment? Every time a pet is rescued we rejoice. An 80-pound family Pit Bull was rescued from a house fire in Roanoke, VA this January by firefighters using a pet oxygen mask. Saddest moment? Watching an 80-year old woman fight to bring her service dog along when rescuers wanted to evacuate her during Katrina.