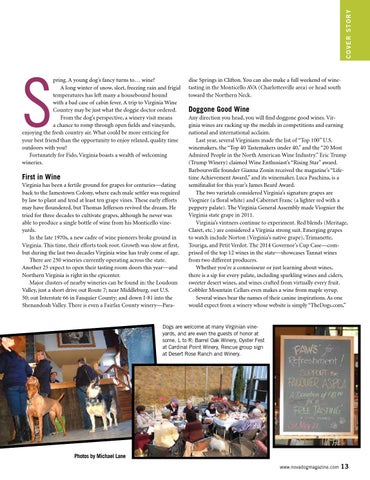 pring. A young dog’s fancy turns to… wine? A long winter of snow, sleet, freezing rain and frigid temperatures has left many a housebound hound with a bad case of cabin fever. A trip to Virginia Wine Country may be just what the doggie doctor ordered. From the dog’s perspective, a winery visit means a chance to romp through open fields and vineyards, enjoying the fresh country air. What could be more enticing for your best friend than the opportunity to enjoy relaxed, quality time outdoors with you? Fortunately for Fido, Virginia boasts a wealth of welcoming wineries.

First in Wine Virginia has been a fertile ground for grapes for centuries—dating back to the Jamestown Colony, where each male settler was required by law to plant and tend at least ten grape vines. These early efforts may have floundered, but Thomas Jefferson revived the dream. He tried for three decades to cultivate grapes, although he never was able to produce a single bottle of wine from his Monticello vineyards. In the late 1970s, a new cadre of wine pioneers broke ground in Virginia. This time, their efforts took root. Growth was slow at first, but during the last two decades Virginia wine has truly come of age. There are 250 wineries currently operating across the state. Another 25 expect to open their tasting room doors this year—and Northern Virginia is right in the epicenter. Major clusters of nearby wineries can be found in: the Loudoun Valley, just a short drive out Route 7; near Middleburg, out U.S. 50; out Interstate 66 in Fauquier County; and down I-81 into the Shenandoah Valley. There is even a Fairfax County winery—Para-

dise Springs in Clifton. You can also make a full weekend of winetasting in the Monticello AVA (Charlottesville area) or head south toward the Northern Neck.

Doggone Good Wine Any direction you head, you will find doggone good wines. Virginia wines are racking up the medals in competitions and earning national and international acclaim. Last year, several Virginians made the list of “Top 100” U.S. winemakers, the “Top 40 Tastemakers under 40,” and the “20 Most Admired People in the North American Wine Industry.” Eric Trump (Trump Winery) claimed Wine Enthusiast’s “Rising Star” award. Barboursville founder Gianna Zonin received the magazine’s “Lifetime Achievement Award,” and its winemaker, Luca Paschina, is a semifinalist for this year’s James Beard Award. The two varietals considered Virginia’s signature grapes are Viognier (a floral white) and Cabernet Franc (a lighter red with a peppery palate). The Virginia General Assembly made Viognier the Virginia state grape in 2011. Virginia’s vintners continue to experiment. Red blends (Meritage, Claret, etc.) are considered a Virginia strong suit. Emerging grapes to watch include Norton (Virginia’s native grape), Trimanette, Touriga, and Petit Verdot. The 2014 Governor’s Cup Case—comprised of the top 12 wines in the state—showcases Tannat wines from two different producers. Whether you’re a connoisseur or just learning about wines, there is a sip for every palate, including sparkling wines and ciders, sweeter desert wines, and wines crafted from virtually every fruit. Cobbler Mountain Cellars even makes a wine from maple syrup. Several wines bear the names of their canine inspirations. As one would expect from a winery whose website is simply “TheDogs.com,”

Dogs are welcome at many Virginian vineyards, and are even the guests of honor at some. L to R: Barrel Oak Winery, Oyster Fest at Cardinal Point Winery, Rescue group sign at Desert Rose Ranch and Winery.