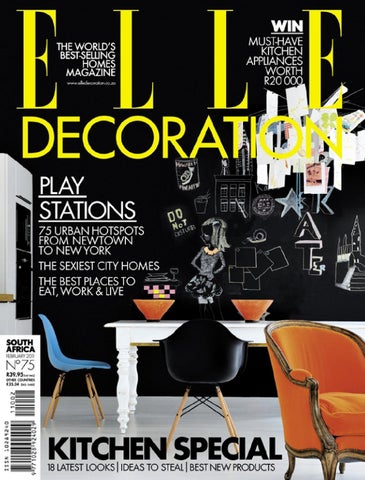 1 Art is bursting from traditional gallery spaces to find new audiences on city streets. Part of Joburg’s urban regeneration has been the active promotion of public art – ensuring that passers-by can enjoy work by masters such as William Kentridge. But street art is not only about the big names – it also claims a voice for people who may lack formal art-school training, but have plenty to say and want to speak to people who never see the insides of galleries. Young artists are sidestepping the established art market, taking their ideas to spaces to which they can relate: the more fluid subcultures and agreeable chaos of our city streets. Here’s a selection of our favourite pieces from around the country…

6 This artwork, which appeared temporarily on Mill Street in Gardens, Cape Town, is typical of the dark humour and graphic, pop-art style of 35ten73. She’s also part of Love and Hate Studio, a creative design duo who specialise in handgenerated images and typefaces for illustration and murals 26

8 4 A giant origami-style pigeon – one of three ‘Paper Pigeons’ by Gerhard and Maja Marx – becomes a perch for birds opposite the Family Court at the intersection of Commissioner and Margaret Mcingana Streets in Ferreirasdorp, Joburg. 5 ‘Fire Walker’, by William Kentridge and Gerhard Marx, on the southern side of Joburg’s Queen Elizabeth bridge, consists of steel plates that form the image of a woman carrying a burning brazier

8 Standing on the busy corner of Bertha and Ameshoff Streets in Braamfontein, Joburg, ‘Eland’ by Clive van den Berg has all the majesty of a living antelope. 9 The installation at the De La Rey Street subway in Vrededorp is Joburg’s biggest artwork and shows scenes of community life, including the laser-cut steel dancing couple (7) pictured on the opposite page. It was created by Bronwyn Lace, Reg Pakari, Rookeya Gardee and 26’10 South Architects, in a joint venture with The Trinity Session