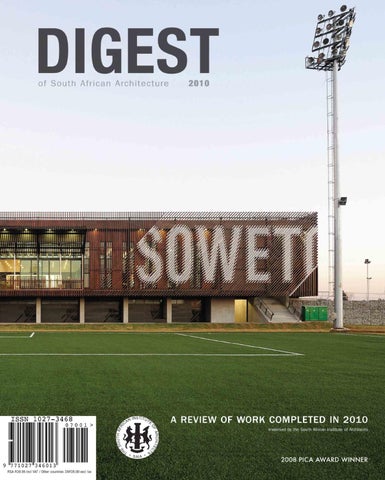 Despite the UN-HABITAT’s call for ‘cities without slums’ in 1999, the number of informal settlements has increased drastically worldwide. Similar ambitions are expressed closer to home. In South Africa, housing lists dating back to 1998 and a backlog in excess of two million houses (not counting the needs of non-beneficiaries) demonstrates that formal approaches to housing delivery are not effective. In response, the informal city fills the gaps left by what the formal city will not and cannot provide. In this context, people house themselves with minimal costs to the state. Whilst these environments are severely flawed, they display complex, affordable, flexible spatial arrangements lacking in the formal post-apartheid housing landscape. The material presented here in a highly summarised form makes an argument for how housing can be thought of going forward, by incorporating lessons learnt from both informal and formal housing strategies. The material has been produced over a two-year period in collaboration with the Goethe-Institut in Johannesburg, 26’10 South Architects, Professor Lone Poulsen and several participants involved in a Gauteng Institute for Architecture (GIFA) masterclass. Diepsloot’s Reception Area has been used as a basis to test existing and proposed formal housing types. It presents a predominantly singlestorey fabric at densities close to 300 dwelling units per hectare. Density, most commonly measured as units/ha, is generally accepted to be low at less than 40 units/ha, medium at between 40 and 100 units/ha and high at more than 100 units/ ha. For the purposes of this article, densities are listed as both stands (dwelling units or one-owner shacks) per hectare, as well as habitable rooms per hectare. Reception Area’s existing density and its quality of spaces and diversity of functions points to the potential for low-rise, high-density solutions which may be freehold and offer opportunities for subletting and small-scale enterprise. Based on detailed mappings of Reception Area by 26’10 South Architects, the masterclass set out to explore the complex relationship between housing density, occupation density, built form and community initiatives. These initiatives include the 166

construction of lettable rooms, the incorporation of small businesses and the effective delineation of communal and public spaces. A one-hectare piece of land situated along a busy street of Reception Area was used to compare different types of housing developments. A number of existing and proposed housing types were superimposed onto this one hectare and measured in terms of the displacement or additional accommodation each settlement type achieves. An inventory of current types was drawn up as part of the masterclass. Here the two most ubiquitous types – the Reconstruction and Development Programme (RDP) house and the double-storey row or terraced house – are shown. When considering the growth over time (in the form of self-constructed rental rooms or backyard shacks), the RDP type, in fact, performs as well as the much-toted row house and delivers densities approximating those of Reception Area. The gradual densification of settlements, although providing for many more inhabitants, requires time, a luxury not available when dealing with areas such as Diepsloot. In addition, the siting of the RDP house in the middle of its plot results in poor in-between spaces when rental rooms are added over time. Simultaneously, the existing settlement infrastructure and social amenities are often overburdened by the increased occupation density. However, backyard dwellings are gradually being recognised as having the potential to impact positively on the housing backlog, not only due to their minimal cost to the state, but also in that they can cater for non-qualifiers. The row-house type, promoted as the alternative to the RDP house, starts out with higher initial densities but has limited growth potential over time, since tenants need to pass through the main house to 168

access their accommodation. Units with passages on one side or access lanes at the back of stands may alleviate this to a degree. While Breaking New Ground (BNG) principles have been developed to render houses safe as collateral for bank loans, current densities are not particularly efficient in the use of land and infrastructure. Furthermore, the banks frown upon self-constructed additions. The housing types proposed during the masterclass for the Diepsloot context attempt to achieve a much higher stand and occupational density from the outset, in order to achieve the minimum displacement of existing residents. The housing types enable eligible beneficiaries to become small-scale landlords who rent habitable rooms to non-eligible residents. The settlement would be planned for the increased occupational density from the start, in terms of infrastructure and social amenities. The design of the proposed housing types also attempt to incorporate and enable income generation through accommodating rental rooms, retail and small business enterprises. The unit types are located close to the street boundary to create a sense of urbanity, natural surveillance, ease of trading and to limit the amount of unusable space between units. Micro-loans, in addition to a basic starter unit (funded by means of the state subsidy), can assist owners to construct quality rental rooms according to various pre-defined options. Part of the resultant rental income would go towards repaying the loan. The vertical-yard type as well as the 14m X 7m row-house type offer two different approaches to achieving both high density and growth over time. Both unit types move away from the ‘shrunken mansion’ syndrome, satisfying a perceived aspiration towards a dynamic flexibility that can deliver subsidised housing in which the

unit becomes an asset for income generation. Whilst the proposed starter types are bigger than the standard RDP house, they can – through savings made due to higher density on land costs, infrastructure and service provision – be imminently achievable. In addition, the availability of micro-loans should offer even more choice to beneficiaries to customise their dwellings to suit their specific needs. The increased densities also achieve the necessary thresholds for the efficient provision of public transport and economic opportunities. Subsidised housing has been the exclusive métier of engineers and town planners for long

enough to prove that low-density settlements – laid out exclusively around minimal service provisions and rendered lifeless through rigid zoning by laws – are not going to solve South Africa’s housing needs. The conceptual shift from the Department of Housing to the Department of Human Settlements should be the incentive to think more holistically about the quality of future urban residential environments, rather than just the quantity of houses. Rethinking the design of housing units, urban layouts and viable settlements requires that professionals, politicians and policy makers take a closer look at the solutions already constructed by ordinary people.

River House Vaal, Free State This house has been designed for weekend use and eventually early retirement, for a family currently living in Johannesburg. The site is located on the Free State side of the Vaal River and has been extensively quarried for rusher run prior to the flood line, being established in the 1970s. This has resulted in much of the site being rendered unbuildable. The clients’ desire for a long, northfacing, single-storey structure resulted in the western edge of the house projecting over the flood line. The natural depression in the ground at this point was slightly lowered, to serve as a carport. The scullery, garage and staff quarters are docked perpendicularly onto the main house, resulting in an arrival courtyard and a more sheltered private courtyard. The garage has doors on both sides, connecting the two courtyards, and forms the ideal venue for informal activities such as table-tennis matches and teenage discos. 176

A separate shed accommodates the clients’ inherited tractor, boat and miscellaneous leisure equipment. It has been conceived as a utilitarian structure built by a local shed contractor and sited parallel to the line of approach towards the house. The projecting garage and staff wing further guide visitors towards the entrance. Here the roof is at its lowest in order to create a sense of intimacy. On entering, the volume of the living room rises upwards towards the sky, while the floor extends onto the patio. The folded plane of the roof is functionally derived and aesthetically fine-tuned to create a modulated form that mirrors the horizon on the north, but rises up to announce the house to visitors approaching from the south. Red earthcoloured brick walls, without visible lintels and subtle window sills, form a monolithic base capped by the thin metal plane of the roof.

The solar installation on the garage roof, the water tanks and tower are treated as straightforward exposed utilitarian elements, albeit sited with care. Rainwater is used in combination with borehole water and is piped in a closed insulated system, ensuring hot water on tap at any point. An outdoor bathroom off the main bedroom is simply housed in a corrugated metal enclosure, which can be opened up to afford views of the river. The existing trees, flood line and contours provided the parameters for the positioning of the house and informed proposals for landscaping, including the siting of a concealed access track to the boat launch which is located between two tall existing trees.