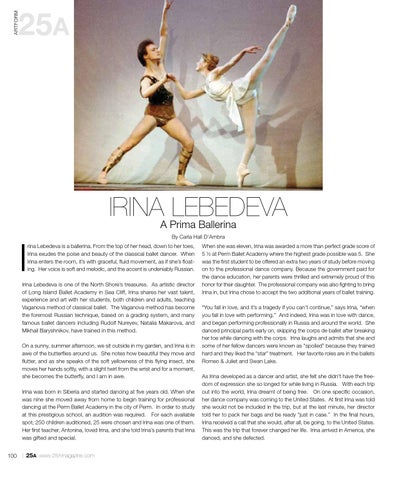 rina Lebedeva is a ballerina. From the top of her head, down to her toes, Irina exudes the poise and beauty of the classical ballet dancer. When Irina enters the room, it’s with graceful, fluid movement, as if she’s floating. Her voice is soft and melodic, and the accent is undeniably Russian.

Irina Lebedeva is one of the North Shore’s treasures. As artistic director of Long Island Ballet Academy in Sea Cliff, Irina shares her vast talent, experience and art with her students, both children and adults, teaching Vaganova method of classical ballet. The Vaganova method has become the foremost Russian technique, based on a grading system, and many famous ballet dancers including Rudolf Nureyev, Natalia Makarova, and Mikhail Baryshnikov, have trained in this method. On a sunny, summer afternoon, we sit outside in my garden, and Irina is in awe of the butterflies around us. She notes how beautiful they move and flutter, and as she speaks of the soft yellowness of this flying insect, she moves her hands softly, with a slight twirl from the wrist and for a moment, she becomes the butterfly, and I am in awe. Irina was born in Siberia and started dancing at five years old. When she was nine she moved away from home to begin training for professional dancing at the Perm Ballet Academy in the city of Perm. In order to study at this prestigious school, an audition was required. For each available spot, 250 children auditioned, 25 were chosen and Irina was one of them. Her first teacher, Antonina, loved Irina, and she told Irina’s parents that Irina was gifted and special. 100 | 25A www.25Amagazine.com

When she was eleven, Irina was awarded a more than perfect grade score of 5 ½ at Perm Ballet Academy where the highest grade possible was 5. She was the first student to be offered an extra two years of study before moving on to the professional dance company. Because the government paid for the dance education, her parents were thrilled and extremely proud of this honor for their daughter. The professional company was also fighting to bring Irina in, but Irina chose to accept the two additional years of ballet training. “You fall in love, and it’s a tragedy if you can’t continue,” says Irina, “when you fall in love with performing.” And indeed, Irina was in love with dance, and began performing professionally in Russia and around the world. She danced principal parts early on, skipping the corps de ballet after breaking her toe while dancing with the corps. Irina laughs and admits that she and some of her fellow dancers were known as “spoiled” because they trained hard and they liked the “star” treatment. Her favorite roles are in the ballets Romeo &amp; Juliet and Swan Lake. As Irina developed as a dancer and artist, she felt she didn’t have the freedom of expression she so longed for while living in Russia. With each trip out into the world, Irina dreamt of being free. On one specific occasion, her dance company was coming to the United States. At first Irina was told she would not be included in the trip, but at the last minute, her director told her to pack her bags and be ready “just in case.” In the final hours, Irina received a call that she would, after all, be going, to the United States. This was the trip that forever changed her life. Irina arrived in America, she danced, and she defected. 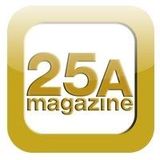 More from 25A Magazine