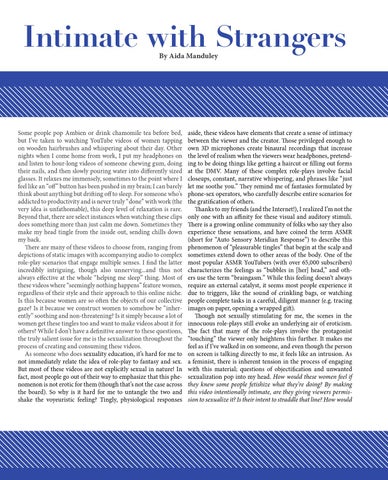 Intimate with Strangers By Aida Manduley

Some people pop Ambien or drink chamomile tea before bed, but I’ve taken to watching YouTube videos of women tapping on wooden hairbrushes and whispering about their day. Other nights when I come home from work, I put my headphones on and listen to hour-long videos of someone chewing gum, doing their nails, and then slowly pouring water into differently sized glasses. It relaxes me immensely, sometimes to the point where I feel like an “off” button has been pushed in my brain; I can barely think about anything but drifting off to sleep. For someone who’s addicted to productivity and is never truly “done” with work (the very idea is unfathomable), this deep level of relaxation is rare. Beyond that, there are select instances when watching these clips does something more than just calm me down. Sometimes they make my head tingle from the inside out, sending chills down my back. There are many of these videos to choose from, ranging from depictions of static images with accompanying audio to complex role-play scenarios that engage multiple senses. I find the latter incredibly intriguing, though also unnerving...and thus not always effective at the whole “helping me sleep” thing. Most of these videos where “seemingly nothing happens” feature women, regardless of their style and their approach to this online niche. Is this because women are so often the objects of our collective gaze? Is it because we construct women to somehow be “inherently” soothing and non-threatening? Is it simply because a lot of women get these tingles too and want to make videos about it for others? While I don’t have a definitive answer to these questions, the truly salient issue for me is the sexualization throughout the process of creating and consuming these videos. As someone who does sexuality education, it’s hard for me to not immediately relate the idea of role-play to fantasy and sex. But most of these videos are not explicitly sexual in nature! In fact, most people go out of their way to emphasize that this phenomenon is not erotic for them (though that’s not the case across the board). So why is it hard for me to untangle the two and shake the voyeuristic feeling? Tingly, physiological responses

aside, these videos have elements that create a sense of intimacy between the viewer and the creator. Those privileged enough to own 3D microphones create binaural recordings that increase the level of realism when the viewers wear headphones, pretending to be doing things like getting a haircut or filling out forms at the DMV. Many of these complex role-plays involve facial closeups, constant, narrative whispering, and phrases like “just let me soothe you.” They remind me of fantasies formulated by phone-sex operators, who carefully describe entire scenarios for the gratification of others. Thanks to my friends (and the Internet!), I realized I’m not the only one with an affinity for these visual and auditory stimuli. There is a growing online community of folks who say they also experience these sensations, and have coined the term ASMR (short for “Auto Sensory Meridian Response”) to describe this phenomenon of “pleasurable tingles” that begin at the scalp and sometimes extend down to other areas of the body. One of the most popular ASMR YouTubers (with over 65,000 subscribers) characterizes the feelings as “bubbles in [her] head,” and others use the term “braingasm.” While this feeling doesn’t always require an external catalyst, it seems most people experience it due to triggers, like the sound of crinkling bags, or watching people complete tasks in a careful, diligent manner (e.g. tracing images on paper, opening a wrapped gift). Though not sexually stimulating for me, the scenes in the innocuous role-plays still evoke an underlying air of eroticism. The fact that many of the role-plays involve the protagonist “touching” the viewer only heightens this further. It makes me feel as if I’ve walked in on someone, and even though the person on screen is talking directly to me, it feels like an intrusion. As a feminist, there is inherent tension in the process of engaging with this material; questions of objectification and unwanted sexualization pop into my head. How would these women feel if they knew some people fetishize what they’re doing? By making this video intentionally intimate, are they giving viewers permission to sexualize it? Is their intent to straddle that line? How would 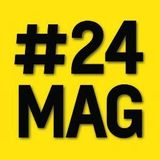