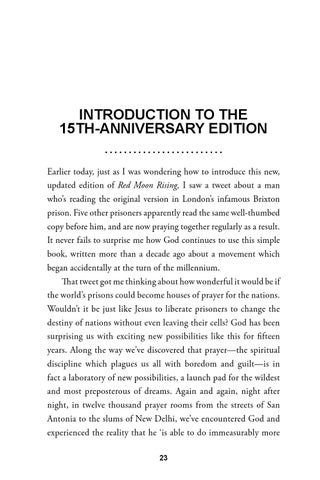 INTRODUCTION TO THE 15TH-ANNIVERSARY EDITION Earlier today, just as I was wondering how to introduce this new, updated edition of Red Moon Rising, I saw a tweet about a man who’s reading the original version in London’s infamous Brixton prison. Five other prisoners apparently read the same well-thumbed copy before him, and are now praying together regularly as a result. It never fails to surprise me how God continues to use this simple book, written more than a decade ago about a movement which began accidentally at the turn of the millennium. That tweet got me thinking about how wonderful it would be if the world’s prisons could become houses of prayer for the nations. Wouldn’t it be just like Jesus to liberate prisoners to change the destiny of nations without even leaving their cells? God has been surprising us with exciting new possibilities like this for fifteen years. Along the way we’ve discovered that prayer—the spiritual discipline which plagues us all with boredom and guilt—is in fact a laboratory of new possibilities, a launch pad for the wildest and most preposterous of dreams. Again and again, night after night, in twelve thousand prayer rooms from the streets of San Antonia to the slums of New Delhi, we’ve encountered God and experienced the reality that he ‘is able to do immeasurably more 23

than all we ask or imagine, according to his power that is at work within us’ (Eph. 3:20). That’s actually the verse I chose to conclude the original version of this book, and here I am using it at the start of this revised edition a decade later. Why? Because as that tweet this morning shows, God is still doing ‘immeasurably more’ than we could possibly have asked or imagined in that first, unsuspecting prayer room way back in 1999—before Facebook, before Candy Crush, before Justin Bieber started shaving. When I wrote Red Moon Rising, I was pretty sure that no one except my mum would ever read it. Who buys a book about a bunch of nobodies deciding to pray a lot? As a pitch, it’s not exactly blockbuster material. But somehow these stories took on a life of their own. My mum turned out not to be the only reader, and she once came across a Czech-language edition in a remote country church. My friend Lucy found Red Moon Rising abandoned in a Hong Kong airport lounge. And today it’s apparently being passed around Brixton prison. This is bewildering to me because, in the words of my forthright New Zealand friend Andrew Jones (aka The Tall Skinny Kiwi), ‘It’s not actually that well written, Pete.’ I guess it must be God. So here I am introducing the fifteenth-anniversary edition, and reflecting that maybe it caught on for two reasons. Firstly, it’s serendipity. God is calling his people to pray and Red Moon Rising got lucky—found itself surfing that particular wave. Secondly, maybe it’s a zeitgeist thing, baby. Maybe my story is a lot of people’s story. We all want to change the world, and wonder how to do it. We want to experience the power of prayer and find it

INTRODUCTION TO THE 15TH-ANNIVERSARY EDITION

hard. Secretly we are weary of revival stories from other places in the world and other times in history, and long for something to happen today, in our lives, our friends, our churches and the streets where we dwell. We’re tired of a vicarious, recycled faith, and long to hear the voice of God for ourselves. We would like Christianity to be the kind of white-water adventure that we read about in the book of Acts; the kind of great adventure upon which you embark with friends and about which you will one day tell stories to your kids without boring them stupid. ‘Did I ever tell you, son, about the time God empowered me to upgrade my Volvo to a Toyota hybrid?’ People often sidle up to me to say that this book convinced them that if God could use someone as ordinary and boring as me, that he could almost certainly use them too. And then, more often than not—just before I can get offended—they tell me about some wild new thing they’re doing because of an encounter with God in a prayer room, or about a brain-frying answer to prayer they have experienced as a result. When I hear their stories, all I can do is grin and say ‘wow!’ because we did a simple little deal with God way back at the start: it’s entirely his problem if 24-7 fails; it’s entirely his glory if it doesn’t. The day we start taking credit for the fact that he answers prayer we are in deep, deep trouble. Obviously, we can’t take credit for the miracles that have taken place and the new ministries that have been born in 24-7 prayer rooms. Birthing pools don’t make babies. It is intimacy with God, like intimacy with a member of the opposite sex, which creates new life. Soli Deo gloria. The 24-7 prayer room where the church was born two thousand years ago has long since disappeared, thank God. But the three thousand who were saved that day are with us still.

And the church herself, born by the Spirit, the body of Christ for the glory of the Father, will never disappear.

RED MOON According to both the prophet Joel and the apostle Peter, God’s heavenly logo for the days in which we live is the harvest moon, rising blood red and pregnant with possibilities. A red moon rises over every generation, awaiting the one who will finally fulfil Christ’s Great Commission to convey the gospel of the kingdom to every tribe and tongue. In this generation we are witnessing the Holy Spirit being poured out upon ten thousand upper rooms, mobilising young people onto the streets, intoxicated with vision. Sons and daughters are beginning to speak prophetically to the culture. Older generations continue to dream. And many people are crying out to be saved. For two thousand years Christians have stared up at the harvest moon and expected the return of Jesus in their lifetimes. Whether or not you believe in his imminent appearance, we are all called to live with a sense of urgency. The apostle Peter puts it like this: ‘The end of all things is near. Therefore be clear minded and self-controlled so that you can pray’ (1 Pet. 4:7). Elsewhere Jesus says that before his return ‘this gospel of the kingdom will be preached in the whole world as a testimony to all nations’ (Matt. 24:14). Has the gospel reached every tribe and tongue? Not yet! There are still cultures which have not had the opportunity to receive the good news of Jesus. Could it happen soon, in this generation? Definitely! A big red moon rose in the winter sky above the nightclub here in Guildford, England, where we gathered to launch 24-7 Prayer in

INTRODUCTION TO THE 15TH-ANNIVERSARY EDITION

the year 2000. For us it was a sign, reminding us of Joel’s prophecy, Peter’s great Pentecostal sermon and the two-thousand-year relationship between prayer, proclamation, innovation and salvation. Of course that red moon was just the start of the story. The trouble with genuine movements is that they keep moving—new things are always happening, and it can be tricky finding the time to write it all down. Fifteen years pursuing continual prayer, mission and justice has been the wildest ride of our lives. We’ve grown up a lot, laughed and wept a lot, spread into almost every denomination and more than half the nations on earth and morphed into a global family of missional and monastic Boiler Room communities. Wherever you’re reading this now, in a prison, in a coffee shop, on a flight or even—lest we forget—in a church, my prayer for you is that these simple stories will defibrillate your soul. God has more in store for your life than anything you’ve so far experienced. He’s put this book in your hands because he’s calling you to obey unconditionally, to pray with all four chambers of your heart, and to fight with muscles you never knew you had. It’s been fifteen years and a lot has changed, but I am still obsessively, dangerously and undeniably fascinated by Jesus. He is the vision. Always will be. No one and nothing else comes close. C’mon! Pete Greig Guildford, England @PeteGreig 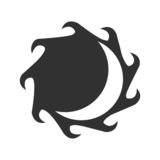